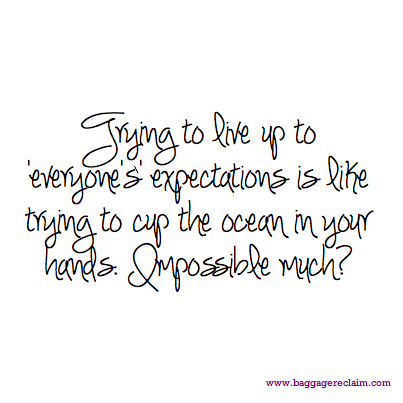 When people share their stories with me about why they find it hard to even like themselves, or why they’re exhausted people pleasing doormats, or even why they have an overactive self-blame ‘thyroid’, I realise that a lot of what happiness is, is about not living your life according to what ‘everyone’ thinks and expects, after all, who is ‘everyone’?

There’s so much concern about whether we’re ‘the one’ for someone. We worry about whether we’re liked, whether we’re good enough, and we try to be a “good girlfriend/boyfriend” or “good friend” or “good daughter/son” pussyfooting around in the hope that we don’t do anything that might cause loss of approval. In the meantime we end up disapproving of ourselves because in the process of trying to meet what we think are ‘everyone’s’ expectations, we lose our self-respect.

While there may be expectations that have been verbally communicated, often what people lose sleep and their identity over, is their own internal battle of trying to outthink the ‘opposition’.

I think of my own life where I have two daughters, a husband, siblings, parents, extended family, various friendships, a large readership that fill up my inbox, comments, Facebook et al, people I work with, neighbours, and the list goes on. Technically, all of these people have some level of expectation of me. It’s not a finite number though so where do I draw the line? Some expectations may be complimenting my own life, or competing or conflicting with other expectations or my own values.

Trying to live up to ‘everyone’s’ expectations is like trying to cup the ocean in your hands.

I spent twenty-eight years worrying about ‘failing’ at meeting my parents and then various boyfriend’s expectations. My expectations were essentially based on what I thought others expected of me, which means that they weren’t really my expectations and let’s be real, some of these expectations that I felt others had of me were based on assumptions that I’d made. Nobody actually told me that I had to be perfect or a doormat although there were some who acted up when I tried otherwise.

Ironically when I focused on meeting my own needs and living by my own values irrespective of what everyone else was doing, not only did I meet my own expectations but I immediately felt happier.

Personally I feel it’s tricky enough to decipher what’s going on in our own minds without trying to do Jedi mind tricks and attempting to ‘magically’ meet people’s expectations. Next thing you’ve busted your tail people pleasing the hell out of yourself only to find that it’s still not ‘good enough’ and you’re in fact trying to please the unpleasable. To add to your woes, often the decision to be a doormat is born out of this idea that you with no boundaries equals being approved of and loved by them, but they didn’t necessarily tell you this. Really, how many happy doormats do you know?

There comes a time when you have to ask: Why is it so damn important to please a world who isn’t even watching me? Why is it so important to please all of these people who aren’t exactly devoting their lives to pleasing ‘everyone’ including me? Why am I sacrificing my identity when I don’t have to? I bet if you look around amongst your family, friends and colleagues that you can’t identify one person who is meeting ‘everyone’s’ expectations.

An actual expectation is a strong belief that someone will or ‘should’ achieve something.

For all of us who are obsessing about what we think ‘everyone’ wants from us, it’s fairly safe to say that the bulk of these people don’t fall into the holders of the ‘strong belief’ category. Some of these people may have made some assumptions or put in a request, but neither are a contract stating that you “must” or “should” be or do something.

When someone ‘requests’ whether it’s through actions or words that you be or do something that crosses or even busts your boundaries, it’s “Petition for the plaintiff denied. FLUSH!”

A lot of what we decide that people want from us is based on our own assumptions, beliefs, fears, etc. It is us who holds the strong belief, after all, people having supposed expectations of us that we don’t have to meet but then we’re trying to meet them anyway requires us to have a the disposition to be receptive to ‘outside requests’. It means not holding a strong opinion on who we are which is why we’re so reliant on external validation.

If you’re the type of person who goes into panic mode at the first sign of conflict or criticism, you’ll assume that if you don’t step up your game and go into people pleasing mode, you’re going to lose approval from the person. But that’s your assumption. That and if you think that a person would disapprove of you and even end a relationship or create other negative consequences because you didn’t meet their expectations 100% of the time, it’s not exactly a flattering belief about that person.

It’s impossible for all of us to meet ‘everyone’s’ expectations. In fact, it’s impossible to meet all expectations all of the time, including our own. It’s why we have to learn how to deal with disappointment and bounce back from it, it’s why we have to recover from NO and not turn it into some massive ‘rejection’ of us as a person, and expectations being met or exceeded, or not being met is actually a huge contribution to the process of learning through trial and error in life.

Just because someone expects or requests something, doesn’t mean that you have to be or do it.

Just because there might be an expectation whether it comes from them or you, it doesn’t mean that it has a basis.

I’ve expected a few relationships from some ’empty wells’ in my time. I’ve expected my father to change, I’ve expected certain people to learn some humility and familiarise themselves with the words “I’m sorry” and I’ve expected some people to engage their brains. You live and you learn from expectation and when you’re based in reality instead of treating every thought as fact, it comes as less of a surprise when certain people don’t meet your expectations but you also realise how damn ridiculous it is to live your life trying to ‘imagine’ what others expect from you. What about your happiness?

There’s always going to be lots of ‘everyone’ so you have to focus on being you and living your life according to your values, which in turn will have you naturally surrounding yourself with likeminded people. Everyone isn’t meeting your expectations all of the time so don’t single you out to be the exception to the rule.

Do You Have A Circular Issue?
Podcast Ep. 169: 'They journal/meditate/do yoga/go to therapy. Shouldn't they be more emotionally in...
Podcast Ep. 39: Were They All 'The One'?, Graduation Goggles, Allowing You To Take Time Off