Forget ‘Mr. Good Enough’, Mr Perfect & The Fairy Tale: Get Real So You Can Get Happy 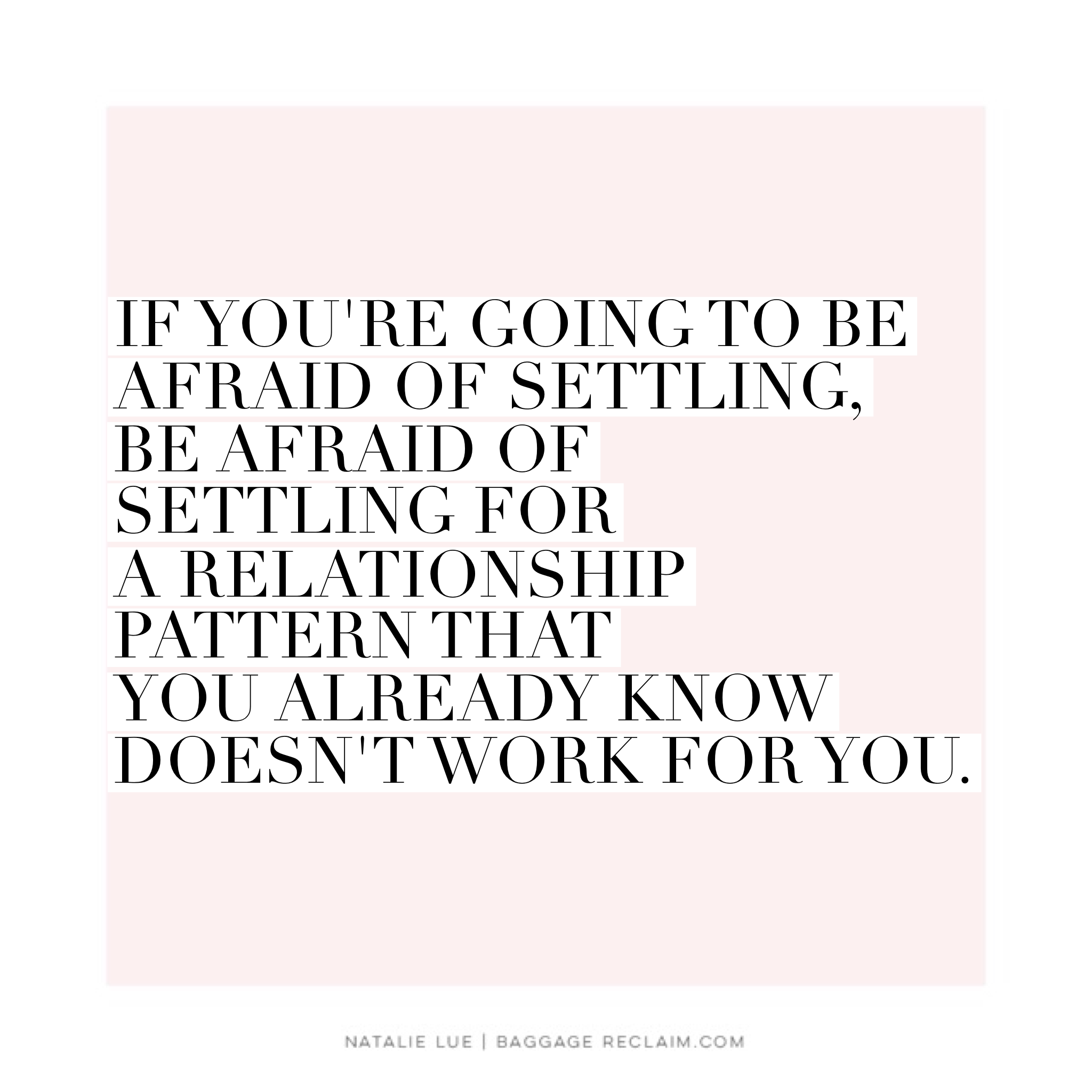 Over the past week or so, I can’t seem to escape the title of this new book — Marry Him: The Case for Settling for Mr. Good Enough written by New Yorker, Lori Gottlieb, who is basically saying that women who continue the pursuit of ‘Mr Right’ are setting themselves up for loneliness. I haven’t read the book yet (it’s out here in the UK next month) but it sounds like she’s talking from personal experience as she’s a single, 40-year-old mom who declined to settle with ‘acceptable but uninspiring’ guys who, now that the cold, hard reality is hitting, seem quite attractive. She wrote an article last year about how women should stop looking for Prince Charming and basically, get real, which was greeted with a storm of controversy.

I’m not really sure what is so controversial about it – I and many other Baggage Reclaim readers are testament to the fact that the jig is up – Prince Charming is a fallacy and when we go looking for the fireworks, excitement, the happy ending, what we end up with is Mr Unavailables and assclowns galore.

Lots of women attach themselves to dubious men and try to love and change them into Prince Charming.  For some it’s trying to turn a frog into a prince, and for others… it’s the equivalent of trying to turn them from a cockroach into frog, and then into prince.

It’s the desire for the ‘happy ending’ that lets so many of us try to extract relationships from assclowns and Mr Unavailables.

We hope our tale will be different. We want to be the exception.

It’s not about ‘settling’ though or even ‘Mr Good Enough’; it’s about getting real, but not in some negative, ‘I must downgrade myself and be with the first semi-decent guy that shows me a flicker of interest and a ring’, but in a positive, ‘I’m going to reassess my expectations of a guy and relationships so I am attracted to someone who I feel good with, who shares my values, and who I can forge a future with’.

It’s also saying ‘I will at the very least have some boundaries so that they know what I will and won’t accept….’

If you’ve been in unavailable relationships, it’s time to admit that you feel attracted to and think that you feel happy around someone who may not be worthy of your time.

You may see more potential in them than exists and in some cases, you’re hoping that loving someone who disrespects you and only thinks of themselves, will cause them to experience the equivalent of a lobotomy and make you the exception.

When we’re not chasing it, we’re going out with someone and adding on our illusions, and as many readers have shared, the illusion doesn’t actually feel that good and can be a real pain in the bum.

Some people can cope with illusions and pain better than others but for a lot of women, there comes a stark realisation that often we can feel alone even when we’re with someone and that we’ve often lost ourselves along the way.

We have to start entertaining the fact that the type of guy we are attracted to may not be appropriate for a ‘happy ending’.

We also have to start entertaining the fact that sometimes, we don’t recognise when we’re onto a good thing.

If we have poor relationship habits and gravitate to men that make us jump through hoops, someone who just plain ‘ole wants to be with you might prompt feelings of suspicion.

If you have a ‘type’ and you’ve found yourself having a string of relationship problems that have impacted on your sense of self and how you view relationships, you’ve got a toxic type and are not interested in the things that actually make for a decent relationship that has a chance of not only surviving, but actually putting you in the position of being happy.

Only the miserable who haven’t realised that it takes two to tango for a relationship and that men aren’t something that you shop for in the relationship supermarket with a list saying ‘Must be my type, like cooking, reading, hanging at theatres, with a great taste in fine wine and a six-figure bank account and a meeting of the minds’, talk about ‘settling’, because they don’t want to get real.

They don’t realise that many of us have negative beliefs about ourselves, love, and relationships and coupled with unrealistic expectations, we subconsciously (and sometimes consciously) seek out men that don’t possess qualities and behaviours that make them suitable candidates for a rosy future.

Real relationships have two people with their feet in them.

They’re a shared experience with love, care, trust, and respect at the foundation.

Sometimes there’s conflict but as well as being together when the relationship is on the up, you’re also very much together when you have to ride through tough times, and it’s these tough times that can really strengthen you.

Much like businesses weathering a recession, you can get a real sense of a couple that can work their way through difficult things that can occur in a relationship.

One of the things that makes it so hard for us to either move on when a relationship ends or that causes us to stay even though we’re miserable, is resistance.

We resist letting go or we resist accepting.

The thing is, once we accept, we are in a position to be real and do something.

This isn’t about killing the dream but it is about realising that sometimes the dream’s not a dream and that it may be based in something unrealistic.

As I’ve talked about recently, it’s about being authentic and making sure that our thoughts and actions are reflective of the things that we profess to believe and value.

If we are being real, it’s a lot easier to get real relationships that we derive happiness from rather than devote ourselves like sacrificial lambs to a life of misery.

I know from corresponding and speaking with many readers that actually, because of our own fears about dealing with our own issues, if we’re actually likely to settle, it’s with the very types of guy that give us relationships where love, care, trust, and respect is absent or scarce.

Change is difficult for a lot of people but it doesn’t mean that we shouldn’t do it, but often we find it easier to stay stuck on a type avoiding the real reasons for why we’re not being ‘successful’ at relationships and avoiding looking too closely at our own contribution, making it far easier to come up with other reasons.

If we drag our feet to the next semi-decent guy that we can bare to take our clothes off with and grin and bear it and marry him, that’s not only settling but insulting the poor guy!

Does any guy out there want to be thought of as the Last Chance Saloon or The Last Option?

Think for a moment of what it’s felt like to be treated like someone’s backup plan, the person they default to or fall back on, but don’t actually come up with the goods to – Do you want to flip reverse it?

It’s not about Mr Good Enough; it’s about getting real, being real, and connecting with someone who wants to be real.

That’s not a slide down the path into mediocrity or ‘averageness’; there’s a lot of good to be had out of taking ourselves out of the illusions so we can enjoy our now and create a happier future.

Get two people together who are actually being themselves and you can get an authentic relationship.

Reality is not boring once you realise that living an illusion or chasing one is bloody exhausting and doesn’t actually feel that good.

‘Mr. Good Enough’ to a lot of women is another way of saying Mr Unavailable or assclown. In a lot of instances with these men, you turn crumbs into an overblown loaf and you normalise bad behaviour because you focus on ‘good points’ and potential.

We have to start asking ourselves: Why do we want to be the exception?

Wouldn’t it be better to desire men who as a norm, are willing to engage with you on all levels and have willingness and a desire to actually put both of their feet in a relationship?

I’ll put it this way: you can keep doing the same thing and expecting different results (relationship insanity) or, you can make different choices but from a positive place. I know that my ‘type’ never made me happy.

I’m now with someone I never imagined I’d be with; not because I’ve downgraded or settled, but because the type of guy and relationship I imagined myself with caused me pain and brought a lot of drama and I couldn’t be myself.

I don’t miss drama at all. In fact, when I think back to the amount of craziness, I wonder how the frick I ever coped, but that was totally normal to me until I got tired of being on the hamster wheel and reassessed my expectations of myself, of other people, and what I thought I wanted from a relationship.

I’m not saying my ‘ending’ is your ending. For a start, getting a man isn’t an ‘ending’ to life, but I am saying that you are totally in charge of where you want to go and even when you think you’re not making a choice, you’re making a choice to not make a choice.

Don’t ‘settle’. Make sure your house is in order and that you are acting in line with the boundaries, values, and the desires you profess to have, and reassess who you have been chasing and being involved with, because there comes a point where you have to accept that you can make it your vocation to turn a pig’s ear into silk purse and be miserable with fleeting highs, or you can reassess your route and have more consistent happiness.

Your thoughts? Have you settled before? What do you think settling means to you?

45 Tips For Surviving Christmas/The Holidays Whether You’re Single, In a Relationship, No Contact or...
The Big Question: Will he try to get in contact with me?
Quiz: How much of a Blame Absorber are you in relationships?
Share this...