Ask yourself: Is there a way that I could love myself AND be in the relationship too? 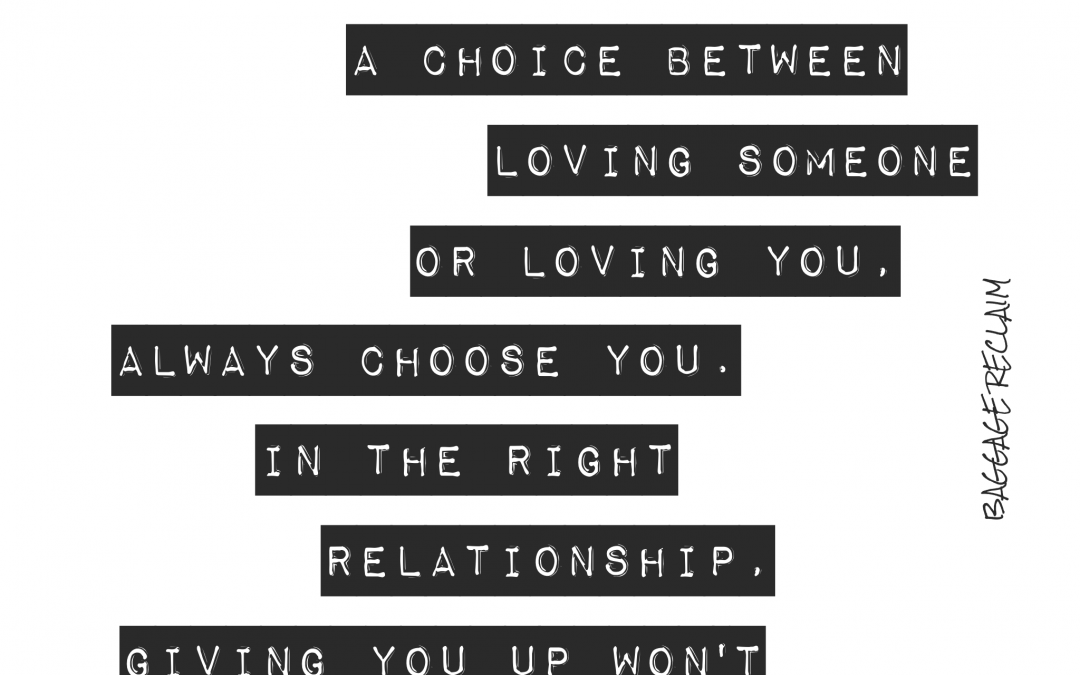 Whether we’ve lost ourselves as a direct result of a relationship or because we give ourselves up in the pursuit of love in general, it’s a problem. It results in confusion about whether to stay or go because we’re unable to distinguish the relationship from our self-worth. It’s a source of external esteem as well as pain thanks to the feels, thoughts and actions tied up in our mentality.

It is possible for us to be in a relationship and love ourselves at the same time.

In this kind of relationship we can have love for another without diminishing ourselves in the process. We experience love that flows and grows between two people. This is utterly different to it being about one party having something we want to ‘get’ or ‘earn’ from them. We will no longer call anxiety, angst, precariousness, worthlessness, uncertainty, turmoil and other such feelings that become the norm in a relationship where we don’t feel good about ourselves “love”.

When we don’t love ourselves in relationships, we’re caught between a codependent rock and a hard place. We either don’t know whether to stay or fold, or we do but don’t have the personal security to back ourselves.

We remove our options. Our possibilities appear to rest upon someone else or at the very least, the social and personal currency that we derive from being in a relationship.

A great litmus test for understanding whether something is our responsibility is to look at whether the efforts we throw at it make a positive difference over time.

If nothing happens or we experience temporary change and then it reverts to the typical pattern, halt. Whatever we’re trying to influence or control, is not our responsibility or within our control. It’s why twisting ourselves into a pretzel to ‘make’ someone become available, is a waste of time.

To get grounded in any relationship where you feel lost and in pain, evaluate whether loving yourself is possible. This tells you what your options are and how much you can influence your happiness and quality of life.

Ask yourself: Is there a way that I could love myself and be in the relationship too?

If your relationship relies on you having little/no boundaries, minimal self-esteem, and it lacking equanimity and equality, halt. Loving yourself isn’t going to be possible in the relationship. And that means it’s time to opt out.

If on examination, it becomes clear that while there are issues, it’s possible for you to grow in the relationship so that it could accommodate a healthier sense of self, you know you can continue. You know that aside from taking responsibility for yourself and so investing in being a loving partner, that your partner isn’t threatened by your growth. They’re also not reliant on profiting from you remaining in an uncomfortable comfort zone.

If it’s a choice between loving you or loving them, always choose you. The truth is, the person who genuinely loves you doesn’t need you to sacrifice yourself for them. They couldn’t comfortably sit by and watch you lose emotional, mental, physical, spiritual or even financial ground ‘for them’. There won’t be a need for you to become isolated from your family, friends etc. And you won’t need to walk around with a cloud of shame hanging over your head.

If there’s a way that you can love yourself in the relationship you’re in, there’s nothing stopping you.

Start somewhere, start anywhere but start, and then keep trying.

The time, energy, effort and emotion that you want to throw their way to fill you up, save it for you.

Yes, it will feel difficult initially because it’s a switch from using the relationship as your reference point, but it’s a very worthy investment. You will live and love better because you know where you end and they begin. It’s the end of codependency.

There is always a way that you can love yourself more. If someone is blocking your efforts, it’s the message you need that it’s time to choose you.

What's your relationship deal breaker?
About dating when you want children
Getting Committed About Commitment: There's No Such Thing As a Decision-Free Lifestyle