Are you a Responsibility Dodger or a ‘But Girl’ caught in your own ‘Relationship Insanity’? 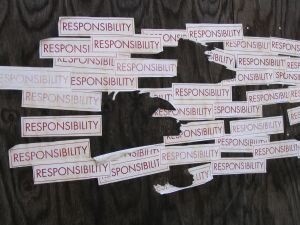 “Why are we attracted to this kind of guy? What issues are we trying to cover up with ourselves to the point where we have to find a guy with more issues so we don’t have to deal with us. The definition of insanity is doing the same thing over and over again expecting different results.”

The last line in particular is something that every woman who keeps expecting and demanding change from others and resisting the urge to take responsibility for her own outcome, needs to connect with.

At some point, you have to stop the if’s, but’s, and maybe’s and quit the cycle of Relationship Insanity.

Much like when I wrote about why do we throw ourselves at bad relationships and wonder why it hurts, relationship insanity means that you are refusing to:

1) Get real and stop living in denial

3) Accept responsibility for making your life different or better

You are dodging responsibility and instead placing everything on him, so it’s his issues, his behaviour, what he says, what he wants, what he thinks, him, him, him.

‘But he was so nice to me at the beginning!’ or

‘But if he didn’t have the problems that he does, our relationship would work’, or

‘But I love him unconditionally (even though I don’t actually know the mofo and he treats me like sh*t I’m gonna ride this bashed up donkey of love till it collapses)’, or

‘But whilst I know I have my issues, I don’t have as many as he does’, or

‘But I’m a really nice person so I want us to stay friends’, or

‘But I’m a really nice person so I can’t just cut contact’, or

‘But he says that he does like/love/care about me and I’m just needy and I probably am’, or

‘But I can’t understand why it’s over and I don’t want to get over this. I want to wallow in my pain and I want a definitive explanation for everything that has happened!’, or

‘But if he can be with her, there must be something wrong with me and that’s why I’m not able to change anything’….

Ladies, don’t bullsh*t yourselves as you already have enough BS to contend with in your dating dalliances and relationships.

This whole waiting, willing, wanting thing all boils down to the same ole usual thing:

Blaming him, saying ‘but’, avoiding taking responsibility for you and your own happiness is about avoidance.

Dating the same man, different package, and then wondering why it’s not working, is avoidance.

You being the same person, with the same self-esteem issues, carrying the same suitcase of emotional baggage, with the same beliefs about yourself, love, and relationships, repeating the same patterns, and also expecting that someone who has behaved the same way 100 times will change on the 101st time because you think they should and you expect change, is about, yep, you guessed it, avoidance.

At some point, you have to ask yourself who died and left you in charge and said that you had all of the solutions to someone else’s problems and what they should do in a relationship when you yourself have your own issues to deal with!

The fire with it’s nasty heat and flames has it’s own modus operandi and presents it’s consistent danger signals, so putting your hand in the fire is damn foolish.

You may not know the length and breadth of a mans problems within two seconds of talking to him or even a couple of dates, but people reveal things about themselves through their actions and their words and when you are around them on a consistent basis, they are actually teaching you what to expect from them, and in turn, how you choose to deal with whatever crap they put your way, not only teaches them what to expect from you, but also what they can and can’t get away with.

You are being told everything that you need to know through actions, signals, and often even words that you are refusing to listen to, or attaching a different meaning.

But if you’re a Responsibility Dodger or a ‘But Girl’, as long as the problems appear to be all lying at someone else’s door, you don’t have to change.

And ‘appear’ is the key, because at the end of the day, no matter how much we deny the reality of stuff, deep down we know and at some point, you have to take a leap of faith on you and start taking responsibility for your own outcome instead of focusing on and obsessing about dipstick assclowns.

Right now it’s all about him but what about how you feel? What about you want, need, think etc? It cannot all be about him!

Now you can make a choice and say ‘F*ck it, I like this pain and drama and I’m not ready to be responsible for my own happiness’ and not only is that your prerogative, but it’s also your choice and all you need to remember if you go with this option is that if you’re in pain and misery (especially if the relationship is already over), it’s you causing yourself the pain, not him.

Or you can put yourself in the driving seat, feel the pain, grieve, move on, heal, build your self-esteem and power your own life and feel infinitely better that you’re not freefalling through life waiting for some man, any man to pick you up and put you on the right path.

There's Something About Mr Unavailable - The Emotionally Unavailable Man
Disclosing Your Past and Insecurities
Stop Skipping The Discovery Phase: Why It's Time To Drop The Shortcuts That Aren't Really Shortcuts
Share this...