Why do we want to be liked by people who we dislike? 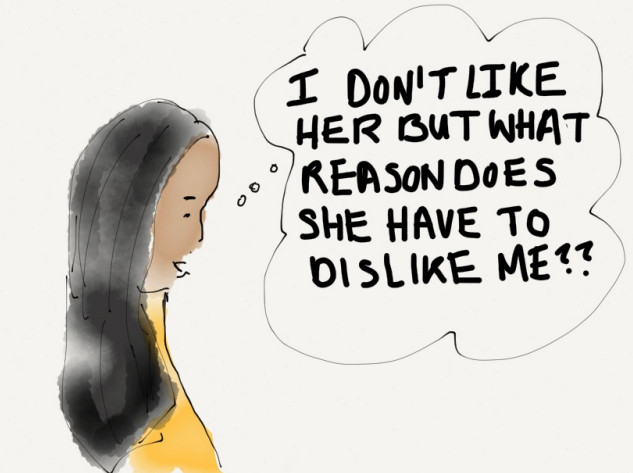 One of the things that fascinates me about human nature, is our irrational desire and sometimes need to be liked by people who we ourselves do not like. We can be mad at a person and decide that we don’t like him/her but then feel wounded and even rejected when they don’t respond to our dislike in the way that we would prefer. It’s as if we need the validation of knowing that they’re negatively impacted by our opinion. We want them to chase after us for our ‘like’ and when they don’t or it even becomes apparent that the feeling is mutual, we feel compelled to engage them in some way that may generate the response we want or that will let us gain clarification about their position, or we quite simply feel rejected.

Why do we need people who we don’t like or who we’ve even called out on something, to like us? Why do we need them to be ‘visibly’ affected in some way? And actually, while we’re on the subject, why do we feel that we should be able to tell a person all about themselves and that they should take it ‘graciously’ and still want our approval?

And that’s really what’s at the heart of this; our relationship with disapproval.

When we want someone whom we don’t like, to like us and to even chase us down for our approval and prove us ‘wrong’ even if actually, our mind is made up, it’s because in some respects, it’s what we would do, but it’s also because when we feel disapproving of somebody, there is an illusion of power and control. When we focus on our dislike of a person, that’s about our perspective and of course, we’re making a judgement. We feel that we have very good grounds to dislike them – and this may well be true – but when we feel disliked or rejected (even though that may not actually be the case) by that very person, it feels unfair.

We don’t feel that they have a good reason to dislike us, or we may even perceive their response as a reflection of us being in the same or even worse light than them. We may even feel that they’re being petty and retaliating and that our feelings and opinions are being ‘invalidated’, when in fact, we are the ones who are doing that due to how we’re responding.

The thing is though, while in an ideal world, it would be great if people only had entirely rational and ‘justified’ reasons for not liking a person, in reality, we don’t always dislike / like people for entirely rational, reasonable, or even existing reasons. Let’s be real – wanting to be liked by someone whom we ourselves don’t like isn’t exactly rational or reasonable either.

We also need to recognise that a person not losing their minds or hunting us down for our approval, doesn’t mean that they don’t like us or that we’re being rejected. Not everything is about us and we can hardly disapprove of or even reject a person, and then hijack that and make it about us. Even if we don’t like a person, that shouldn’t stop us from empathising and recognising that even if that person isn’t making an obvious display, it doesn’t mean that our opinion of them hasn’t affected them in some way.

If we don’t like a person whether rightly or wrongly, it makes sense for that person not to continue engaging with us and to recognise boundaries – ours and theirs. As many of us know, making other people’s opinions or even validation of us as the basis of our self-esteem, is a quick slippery slope to losing our dignity. We have no right to expect that person should take ownership of our feelings and opinions about them. Their response also doesn’t mean that what we feel or think is ‘wrong’ – remember that if they know that you don’t like them, they will have their own way of dealing with rejection.

We also have to be careful of inadvertently or very consciously playing games. I’ve known of more than a few people who feel really in control when they think that you not knowing what the frick they’re angry with you about, is messing with your mind. Sometimes they’re not even really annoyed with you but on seeing that you’re stressing, they enjoy the attention and power.

If, however, when they finally decide to share their discontent and disapproval with you, not only are they way off base but you then choose to respect the nature of the situation and yourself, and in turn you step away from it, they suddenly feel out of control. They’re then bothered that you’re not bothered enough to continue making a drama out of it, or they’re upset that you’re now perceived as not liking them, even though they’ve just spent however long blanking you, moaning about you to anyone who will listen, or even casting you as an assclown in their imagination.

The difficulty in these situations is that when a person treats us in this way and it stems from an error of judgement or even paranoia, it can make for an incredibly awkward situation. They may decide that they want to be friends whereas we (when we’re the victim) may see what has happened as evidence of the fact that there are significant trust issues or that quite simply, we had thought that we were ‘cool’ with that person and it’s quite apparent that we were being actively disliked. We can’t just press the reset button and often, that’s exactly what they want.

One ex gave me a list of reasons as to why he felt that we weren’t suited and then called me out on the fact that I hadn’t been beating down his door. “If you’d truly loved me, you wouldn’t have just taken what I said lying down. You didn’t even fight for us?” Based on what he said, he didn’t like or love me, and there definitely was no “us” and this was one of those experiences that reminded me that we can’t just offload our irritation, dislike, or even contempt and then expect that person to ‘take it on the chin’.

The question we always have to ask ourselves in these situations is, Is it fair and reasonable to expect to be liked or even chased by people whom we don’t like?

It’s also a good time to check in with our feelings and thoughts and ensure that we are not letting ego and a misplaced desire for validation, outpace reality and healthy boundaries. We are in danger of opening ourselves up to a great deal of pain when we base our self-esteem and security on our ability to influence and control the uncontrollable. We are entitled to dislike people because quite simply, it’s impossible to be liked by everyone or for us to like everyone. It is. It doesn’t make us a ‘bad person’ for disliking somebody – it just makes us human – but we cross boundaries if we pursue their liking us, especially when our own position has not changed. If we don’t like someone, that’s our prerogative, but that decision also denotes that it’s time to move on – it makes sense for our energy to be directed to us and to people we like, not trying to influence and control the feelings and behaviour of people that we’ve already decided aren’t to our taste.

It’s too much for us to expect that the people we dislike should also validate us further once our feelings about them become apparent. It is our job to validate us and we can’t expect people to hang around and suck up to us so that we can feel better about our decision or so that we can have the leeway of changing our mind on their time. We don’t like that feeling of having to convince and audition for a person to see us as worthy. If you’re on the receiving end of this, don’t give that person the power to define you. Accepting that they don’t like you doesn’t mean that they are correct – it just means that you recognise that you need to adjust your behaviour accordingly and direct your energies towards people who value you.

What's your relationship deal breaker?
Do people change after saying they’re not ready for (or don't want) commitment?
Do you want to be happy, or do you want to be 'right'?