You’re not the only one who’s afraid of rejection 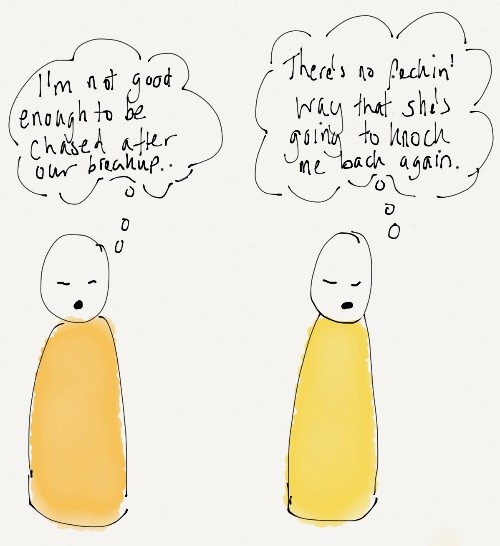 When we’re hurting and struggling to feel good about ourselves, the way we tell it, our blanket reason for why something has or hasn’t happened, pretty much boils down to rejection. We make it about our worth, whether we’re ‘good enough’, what we think we did or didn’t do, and likely analyse the crappola out of the other party. When we were hopeful, feeling great or even crazy about them, there were two of us and now that it’s all gone pear shaped, it is solely about us even when it’s about him/her/the situation. We end up rejecting ourselves because we decide that other people’s behaviour is provoked by our worth and what we didn’t be or do enough of.

We can feel rejected because:

Everyone has some level of fear of rejection. Everyone.

We all have ‘rejection behaviours’, you know those certain things that we do when we feel slighted, wounded, or believe that we’re in line to experience it.

We go into people pleasing overdrive.
We try to fade into the background.
We go dark and try to avoid the people involved.
We get defensive and argumentative.
We create a conflict situation so that we can speed up what we believe to be the inevitable.
We disappear.
We go dark until we feel that the dust has settled and then see if we can slink our way back in.
We decide that we won’t make any or as much effort anymore so that the other party has to or they leave.
We fume, ruminate and berate ourselves with a stream of negative self-talk.
We fear being abandoned so may engage in clinging, begging, pleading, and trying to get the person to show or agree that they won’t leave.
We get involved with someone else as a backup or start sniffing around on dating sites, collecting attention and essentially softening the blow.
We exit a relationship and hurtle straight into another.
We cheat and play hooky with someone else so that we loosen the commitment reins and feel in control.
We post stuff on Facebook to give the impression that we’re oh-so-happy or we tell anyone who will listen that we don’t care.
Some of us will build up a person and knowing that they’re going to find out what we’re about, we devalue and discard that person to feel in control.

It is all too easy to make ‘everything’ or at least anything you don’t like, about you. What really drives each of us are our habits (our typical thought, emotional and action responses to certain cues and triggers) and ultimately the decisions we make, often without thinking, are about how we feel about us in that context and how much of our potential to be vulnerable is being limited.

I know that a big part of why my father is not and was not around very much is because of that fear of rejection. It has always been down to my brother and I (or my mother when we were kids) to make the overtures. In the past I’ve felt very rejected by all of this, especially when I’d leave him to reach out and then…zilch. This became my blueprint for my relationships.

It’s easy to fall into the trap of over-empathising and then trying to make up the shortfall but that’s a painful choice because you keep rejecting you so that another person avoids having to do the very thing that’s needed in order for real change to come about – be vulnerable.

Now that I no longer make it about me, my worth and my validity on this planet, I can empathise enough to put that sense of rejection where it belongs – out of my heart and mind, and also into perspective.

This doesn’t mean that I ‘condone’ or absolve him of his actions but now that my whole being isn’t riding on another person’s actions or lack thereof, I’m able to get on with the business of living and doing for me what I wasn’t able to get from him or my exes.

When you wonder why they’re not chasing you down after you told them to jog on or you stopped making all of the effort, when you agonise over how the hell they can be flaunting their new ‘love’ two seconds after you broke up, when you wonder why they just won’t try, step up, fight for you, just remember, you are not the only person who’s afraid of and trying to limit rejection. That and for some people, their way of never seeing or feeling too much is to move onto new pastures and press the Reset Button….

The more you see beyond you, is the less you see so much of you in other people’s behaviour. Set you free.

I’ll do a holiday update next time. Em and I were up until near 1am sorting the house out for the photographer and then at it again this morning. I’m wrecked!

You're Not Going Crazy: It Doesn't Matter If They're Unavailable or Not That Interested
Don't change your mind about being yourself on a whim of chasing potential
Relationship Advice: I cut contact with him but I don't want him to be angry or hate me.