Advice Wednesday: My Workaholic Boyfriend Doesn’t Have My Back

One of the things that we can find difficult to ‘argue’ against is when we have a ‘super-busy’ partner who work work work work works or who seems to spend every spare minute exercising or doing favours for other people. These appear to be cast-iron alibies that explain their unavailability and we can almost feel as if we’re being selfish or needy for feeling away about it. It’s not as if they’re spending their time overdoing something else such as alcohol or other substances or they’re gambling, shopping, eating or something else excessively, so we might push down our doubts and concerns. 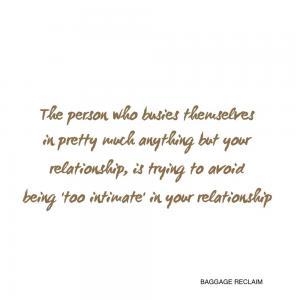 Of course when somebody is over-something it and it becomes at the expense not just of the happiness of the relationship but even their own well-being, we are right to feel concerned. These can be forms of avoidance–ways of pushing down or even obliterating feelings and thoughts. It’s a bit like when we’ve experienced a hurt and we throw ourselves into work or being as busy as we possibly can. It helps us to focus on something else but there can, if it goes on for quite some time, be a fear of slowing down in case all of the feelings emerge and we’re not able to deal with them.

A close friend of mine went out with a guy who was a workaholic, gymaholic, marathonaholic who would also do favours for everyone. When he did fit her in, she savoured these snatches of time and felt almost grateful for the attention but couldn’t shake this mounting feeling that sure, if she wanted him to come to the rescue about something practical like changing a tire, he’d be there in a flash but that emotionally, mentally and even physically, she was being left hanging by him. She realised that she had been silent for too long when he went incommunicado for two weeks and then reappeared with little explanation and she erupted at the outrageousness of it all.

In this week’s Advice Wednesday, Kristen has moved three hours away from everyone she knows…to be with her workaholic boyfriend who proceeded to ramp up the amount of work he was doing and then distanced himself from her when she struggled to get a job in her new town and needed help from him including financial support.

It’s hard enough to move to somewhere unfamiliar or to settle into progressing a relationship without having to feel that if you are less than perfect, your partner’s going to run for the hills. It’s OK for a partner to be scared and many people do get triggered by money, but communication is vital. Stonewalling and giving the impression that being needed in any way is a bad thing, puts the relationship in a rather precarious place. The true test of a relationship isn’t about how it runs when the going is smooth but whether each party still has each other’s back and remains on the same team when they hit life’s inevitable bumps like stress, conflict, criticism, disappointment and loss.

If somebody keeps sending the message that you’re on your own emotionally and that they don’t want to be relied upon, it’s going to undermine intimacy and commitment in the relationship and you won’t be able to feel secure in the relationship. Ignoring problems and hoping that they will disappear, for instance, when you move in together, will delay dealing with the inevitable which is only going to snowball. If they refuse to talk about anything and only warm up when you collude with them in avoiding the prime content of a relationship, it’s only right to be concerned about the future of the relationship. It’s not about being codependent where you’re excessively emotionally reliant or about being fiercely protective of independence where closeness is seen as a threat; interdependence means that you each honour the separateness but are healthily mutually dependent.

Some people are very good at designing their life in such a way that there appear to be legit reasons for why they can’t show up, but you know what? People have jobs, exercise, do favours for others etc and show up to their relationships so don’t let anyone who’s dodging intimacy, minimise your needs. Most of all, don’t sell you short by settling for being the fringes of someone’s life.

Have you been with a super-busy partner or somebody who was overdoing something that gradually encroached on your relationship? What advice can you offer Kristen?

Maintaining your position in and out of your relationships - Part One
Guest Post: Don't Envy The "Other" Women Who End Up With Mr Unavailable. It could be karma...
Reader Question: Is control more important for Mr Unavailable than being with you?