Advice Wednesday: Should I Cut Off The Friend Who Keeps Trying To Make Me Look Bad? 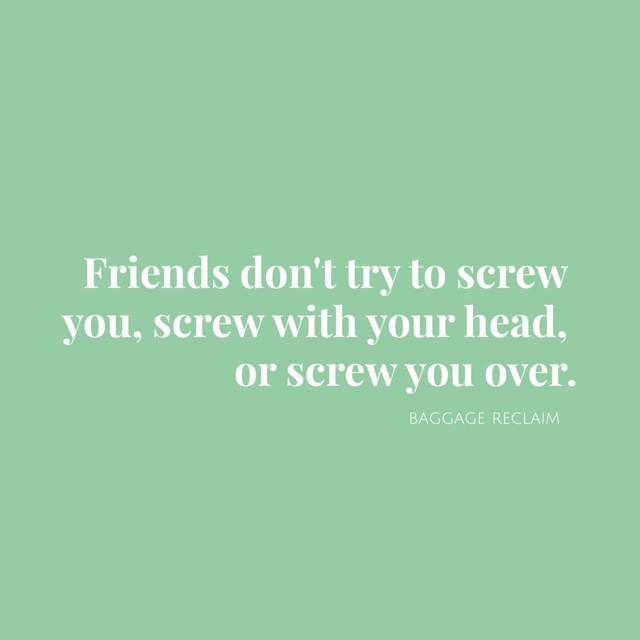 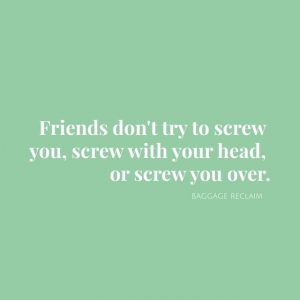 Evelyn asks: I have been working on making new friends.  I have a new(ish) ‘friend’ who decided to tell a group we were hanging with, a story about what happened when we were camping.  Thing is, she changed it so I looked like a bad person, or at least not very considerate.  I sat there very surprised.  I did speak up and said, “No, that’s not what happened, this is what really happened.“  This is not the first time she’s tried to make me look bad, especially when men are around.  I’ve defended myself so far.  She also seems to have to be the centre of attention.  Now I feel very guarded around her, she threw me under the bus. I am considering saying something directly about it, now that I see it’s a pattern, yet wonder if I would be better off just to cut my losses.

One of the questions we’re often faced with in new relationships of all kinds is, Is this OK? As in, is what they’re saying/doing or how I’m feeling/thinking about it OK? We ask this question because we’re experiencing discomfort, which is our cue to be more boundaried, which some of us find just as hard to do with new people as we do with more familiar folk, sometimes even more so.

Let’s be real: we don’t make new friends or in fact new relationships full stop, with quite the ease that we did when we were younger and for some of us, it’s never been easy. For instance, a significant portion of the BR tribe that I’ve met or conversed with have traumatic experiences of friendship that still influence their self-esteem as well as their confidence in friendships today. I’ve come across women who don’t trust any women, men and women who don’t seem to realise that their ‘best friend’ is their tormenter, people who have given up on friendship altogether and experience grief and loneliness, and people who are stuck in a rut with their high school circle of friends.

You haven’t divulged the ins and outs of what happened while camping but that’s neither here nor there: She recounted the story in such a way that you felt sufficiently embarrassed and as if your character was being cast in a certain light so that your friend could either enhance her reputation in this social circle or so that she could distract from herself by cutting you down.

As it’s a new friendship, you not only don’t have an established pattern on which to draw wider inferences about her overall character, motives or even backstory, but when she behaves in this manner amongst other people who are new to you, it speaks to that base fear of looking ‘the fool’ and ‘uncool’ amongst peers who we want to impress or at the very least, fit in with.

Friendship plays an important role in our sense of belonging and security. While we might have family who we feel that we can express our innermost feelings and thoughts with, friendships do represent the family we would choose for ourselves, if we have the self-knowledge, self-awareness and self-esteem to do so of course.

What strikes me in your story, Evelyn, is that this relatively new friend behaves in a manner that has the potential to significantly impact not just on the dynamic of the friendship but also your self-image, if you allow her. Now you could take enemy binoculars and draw the conclusion that she’s out to destroy you and even see her behaviour as a reflection of you, or you through compassionate binoculars you could see it for what it is:

It is annoying, it might be pretty damn rude in some instances and it’s not right for you to be the butt of her jokes or the one she throws under a bus to bolster herself, but see what’s going on here so that you can 1) handle her but also so that 2) you don’t allow experiences like this to colour your view of friendships in general.

Your friend behaves in this way because she lacks confidence but is also on some level threatened by aspects of you. She might have a scarcity mindset where she thinks that there’s only a tiny bucket of men that she has to fight off every woman to get. She might fear that people will find you more interesting/attractive/intelligent etc than her.

There is of course an irony in this story and the pattern of behaviour: you are so concerned with looking like a “bad person” and “inconsiderate” that it hasn’t necessarily occurred to you that if anyone is looking like the “bad person” or certainly erring on the shady and inconsiderate side, it’s your “new(ish) friend”. You’re not the only one witnessing her insecure behaviour and others will also be wary of her.

Cutting her off is of course an option but it’s not the only one or it certainly doesn’t have to be the next step.

Sometimes cutting people off is seen as the safer alternative to the vulnerability and intimacy of boundaries. We see it as the lesser of two evils when boundaries are in fact healthy, necessary and liberating. Sure, cutting people off might give you an initial satisfaction but if you end up in another situation like this, how has you giving the chop resolved anything?

This experience is calling on you to do two things:

Is there anyone else that brings up similar feelings for you? Who else needs to be the centre of attention at all costs? Who have you felt as if you have to dim your light in order to feel safe? Who has tried to scapegoat you? This will help you identify whether there’s anything else at play here but it will also give you the opportunity to resolve and heal anything similar from the past.

Do broach the subject with her, not because she will necessarily amend her behaviour (although she might) but because it’s the boundaried thing to do.

“I’ve noticed on a few occasions, especially when we’re around a group of men that you make comments that have given me the impression that you have an issue with me. For example, ________________________________”, and then give no more than 3 specific and brief examples that illustrate the issue. “As we haven’t known each other for that long, I’m sure you can appreciate how discomforting this is. When you make comments like you did about the camping, I feel very embarrassed but also hurt because it feels to me that you’re trying to communicate that I’m an inconsiderate person. I’m broaching this subject with you because it’s important for me to feel comfortable in my friendships and I don’t like feeling guarded, but also because I want to try to understand where you’re coming from. If I have done something, I would much prefer that you say this directly to me rather than communicate it via these comments in a group”.

Find out if she has something going on with her but also don’t tell her what her opinion is of you—let her tell you what’s behind her own behaviour. She’s either going to confirm what you already think, deny it, or tell you the actual motives for her behaviour.

The reason why I have suggested you approach it as above is because it’s very possible that despite how obvious it is to you or others, her insecurity-led behaviour may not be something she’s aware of. Some people aren’t aware of how their jealousy, insecurity, envy or resentment manifests itself but when you paint a picture with facts rather than purely your emotions, they can see things from your standpoint.

If she’s unwilling to discuss or apologise, I would reconsider your friendship and seek to distance yourself.

Friends don’t try to screw you, screw with your head, or screw you over.

Friendship is a mutual relationship between friends so if this new friendship is reliant on you being a bit-part player, it’s not a friendship and you’re free to make the gains by letting it go.

Have you had a friend who seems to enjoy putting you down or stirring things up? Do you have a friend who lets their insecurity get the better of them? What would you do?

How Having a "Tell" Can Give Someone The Impression That You'll Tolerate Their Behaviour Or Issues
Is it so hard to join the sisterhood?
Building Boundaries for Healthier Relationships