Getting past disappointment: let go of the ‘fixed ideas’ that hurt you 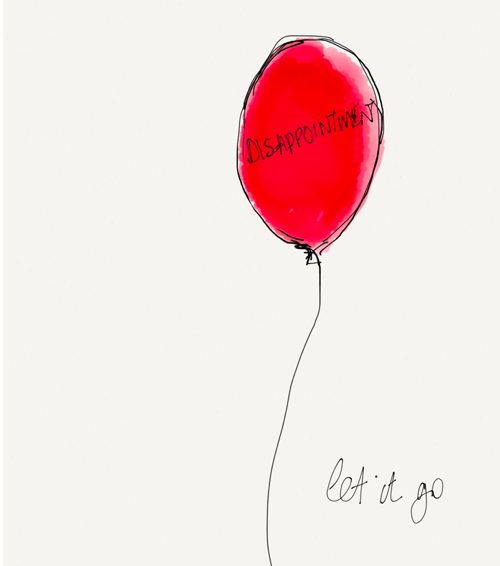 One of the things that we find difficult to deal with in life is disappointment, that sense of our hopes and expectations not being met. Part of getting through the on-the-job training that is life, is learning how to navigate and bounce back from disappointment. Some of us find it harder than others, especially if by the time we became adults, it felt as if we’d already experienced our life’s quota of it. We might want adulthood to be a break from disappointment. Instead, life’s inevitable truths prevail in our lives.

People can and will disappoint. Sometimes things will go wrong. Sometimes we’ll err. Sometimes our hopes and expectations are more imagination based than reality based and so we have to reconcile the fantasy with reality, and in turn we may feel angry and hurt with ourselves. Sometimes it’s just straight up disappointment and because we can’t get mad at the disappointment or even the other person or parties involved, we sometimes get mad at ourselves.

Of all of the things that I see BR readers struggle with, it’s the hole in their lives created by not just experiencing the disappointment but the knock-on effect of how they reacted and then continued to react to it.

It’s understandable to be hard hit in the aftermath of disappointment and to go through the myriad of emotions that can be sparked by grief, but when we’re still berating, comparing and beating ourselves up months or even years down the line, that disappointment hole doesn’t close; it becomes palpable.

I remember waking up on some mornings in my darker times and for the first few seconds I’d be alright and then I could almost taste the disappointment and feel it swallow up the momentary brightness. I nursed that disappointment. I chaperoned the hell out of it so that I could avoid having to get back up, after all, it was blocking my way. I looked for signs of it everywhere and so when I saw someone who looked remotely happy or friends told me stories about their families or romantic partners or talked of their successes, they confirmed my disappointment for me. I’d read the papers and there would be some dumb survey/’research’ about single people or the ‘plight’ of women and I’d think, “Yeah… I really f*cked that one up. I’m destined to be worthless, good for nothing and found alone and dead in my apartment with the post piling up around me.” I felt like I’d had ‘more’ disappointment than others. ‘Everyone else’ got to be in a ‘normal’ family, were praised all the time, never disappointed, had the perfect boyfriend/girlfriend, and basically didn’t have bad things happen to them. This was complete bullshit.

Each day, readers ask me: how do I get over a disappointment?

Sometimes we don’t realise how much we’re resisting accepting what has happened, which is futile due to one thing: the disappointment is done.

We can compound it or we can gradually neutralise it. We can feed that disappointment with as much negativity as possible or we can gradually fight back and decide that it doesn’t get to claim all of us or our lives. Anything afterwards is about reaction and recovery and at the heart of these is perspective.

If the disappointment isn’t receding, it’s because your perspective isn’t adjusting and growing. Find the ‘fixed’ ideas that you’re still attached to.

We can be surprisingly stubborn when it comes to holding onto thinking and so we become attached to a fixed idea that isn’t actually fixed, such as the notion that we’re no good or that we’re to blame for ‘everything’. Part of our rigidity around this may be fueled by ‘fixed thinking’ prior to the disappointment where we may already have predetermined the outcome even if it wasn’t necessarily reflective of what was actually going on. Sometimes we’re so caught up in trying to anticipate what’s next that we’re not as in the present as we should (mindfulness), and so we come back to earth with a bump.

The net result of our hopes and expectations not being met, is that gap between what we thought would happen and what actually happened. Once the disappointment happens, information may be coming in that could shift our perspective but if we keep circling back to the same fixed idea, we won’t get much relief from the disappointment. The disappointment will feel permanent because we think that how we perceive things is fixed. We can change our mind and ultimately our perspective about something, whenever we feel like it. It’s that willingness to let go of thinking that doesn’t truly serve us because it ultimately limits and stifles us.

In accepting my disappointment, I acknowledged how I felt, what I thought and what I’d been doing. These disappointments felt bad because I was reopening old wounds and telling me all sorts of bad things about myself that just weren’t true. I was attached to feeling bad about me. Disappointment gave me a purpose. I learned a lot about me by accepting the disappointment. It wasn’t pretty at times but you know what? It was better than the torment of giving myself a hard time over not being able to control the uncontrollable or even worse, doing the equivalent of throwing tantrums.

I used to be quite rigid in my outlook because I hated the idea of being wrong, but I’d rather be wrong about me not being good enough than spend my life trying to be right about it.

I decided to accept the disappointment and what it meant about the situation but I also stopped choosing to accept that the disappointment meant that I was this worthless person. That wasn’t the lesson otherwise I would have moved on from that lesson instead of repeating the ‘class’. I’ve been through it again over the years and last year as I came to terms with the disappointment over my father, not only was I reminded that life goes on even when you want to spend your time replaying your mental tapes, but that we have that power to close the hole created by disappointment and that when we immerse ourselves too much in it, we turn away from faith, love and ourselves.

When I think of some of those disappointments, I acknowledge the feelings but I don’t delve into rehashing. Instead it’s, “Today I choose me” or “Today I choose to love”, because I have a busy mind given half a chance.

Disappointment is a very real feeling but don’t let it claim you. Some disappointments you learn to live with and they gradually stop dominating your thoughts and conversations. Others just fade out because in treating you well, that balm soothes the hurt and you become open to better days and things ahead.

Let the pain and the fallout be your turning point
Dismissing those childhood experiences is akin to dismissing you
When our friend dates our ex, is it OK, and can we be upset about it?
Share this...