Honesty’s Got To Cut Both Ways 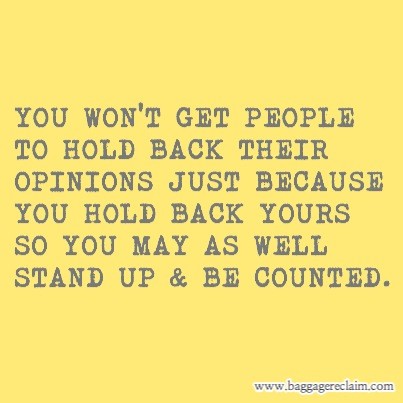 As many of you know, I’m on a low BS diet and so while I don’t go out of my way to call people out on their BS, when I’m in a situation where the person is trying to get me to agree with it, I struggle, like when I had a relative complaining about a mutual friend.

Her: I don’t like being ‘told off’ and she’s made me feel like a child! Why did she have to say that? Who the hell does she think she is talking to me like that? I’m a grown woman. You know, I don’t go around criticising people!

Does a double take and puts her hands on her hips.

Me: Er, yes you do. You love telling people off and you’re not exactly shy about letting people know when you’re p*ssed off.

Examples were requested so I gave her some and she quickly called a halt to it.

Her: But that’s different – I’m being honest and those people have done something to p*ss me off.

Sometimes we don’t see ourselves as we are and often we have a habit of doing things that we don’t like in others and repackaging it as something else.

When you struggle with two-directional honesty, it’s perceived as nastiness when it’s coming in your direction but honesty when it’s coming from yours. You have good motives they have dodgy motives. You’re expressing your opinion whereas they’re hurting you or overstepping the mark.

It’s important to note though that not all honesty and criticism is created equal. Honesty is only genuine honesty when there’s truth and respect. Some people do package up nastiness that cloaks their own dishonesty in a bag tagged with the label ‘honesty’. Some people are also so distanced from the truth that what they’re saying to you isn’t the truth but the lie supports a rather convoluted framework of lies that if you even attempt to make sense of it, it’ll have you tangled up in a rather sticky, smothering web.

Often the things that we don’t like in others lead back to some sort of lesson within ourselves. It’s like when I hear someone complain about how such-and-such is a beep because they talk about people behind their back and I scratch my head and think “Er, aren’t you doing the same thing right now?” If you’ve ever complained about not being able to make a decision because you’re involved with a fence sitting flip-flapper, has it occurred to you that you’re also sitting on the fence? Basically, if struggle with letting honesty cut both ways, you need to learn how to be more honest to yourself and to others.

Everyone has their own realities which is all the more reason why it’s best to make your journey in life around people who share similar values and an affinity for keeping their feet in reality and not talking out of their bums.

That said, you cannot expect honesty or claim to be an honest person when you don’t allow it to cut both ways and you’re not receptive to feedback. You also can’t expect to have the right to criticise or give ‘feedback’ but censor what is said to you. That would mean that you would have high sensitivity about something that you are lacking as much sensitivity about with others.

If you feel “hurt” every time you experience honesty even if it’s actually well-intended feedback, you limit the opportunity to grow out of these experiences. I should point out as well that if you avoid being honest in the hope that others won’t be honest with you and that you’ll avoid conflict and criticism, you’ll just end up feeling like you’ve been done over.

People won’t silence their opinions just because you silence yours so you may as well speak up.

When criticism and honesty don’t cut both ways, you have a rather big bullshit issue. And keep in mind – if you’re dealing with someone who seems to think that they can be ‘honest’ with you but then turns on you when you attempt the same and metes out some sort of ‘punishment’, alarm bells should be ringing. They’re not some perfect human being absolved of feedback.

Ultimately, make sure that you’re not ‘double standarding’ yourself because you undermine your credibility. It’s not that you should stop being honest or giving criticism (that won’t shut people up anyway believe me) but you do need to learn to listen before judging someone as being ‘bad’ for giving you feedback about something that may give you a lesson from the insight gained.

It’s very difficult to have a mutual relationship with someone who gets upset or even goes into combat mode around honesty. It’s like saying “Lie to me / hold back what you really think.” Really?

If you won’t let it cut both ways, you’re implying that you have absolutely nothing new to learn and that you don’t need to change in any way – you do, we all do. Not everything that we do is working for us – being unable to tolerate two-directional honesty is one of them.

I remember when one particular ex (the controlling one who would get antsy if the blinds weren’t pulled the right way) told me that he was tired of me apologising all the time (I went through a phase of just apologising for pretty much everything) and that I basically didn’t handle things in the most ‘mature’ manner. I was really offended but actually there was some truth in there and I used the insights to get the hell out. It’s the same when someone is saying that they don’t deserve you and that they can’t give you what you want, or that you’re not the right person for them. It hurts, but that honesty is actually showing you who they are or what they’re about but it’s also giving you some insight into the fact that for whatever reason, you’re around someone who doesn’t appreciate you. When you’ll heed the lesson, you can be honest with matching actions and words.

Updated 29th October: An audio version of this post is now available on Soundcloud.

Overused Word Alert: Let's Talk About Being 'Needy'
Is It Time To Go On a BS Diet?
Keeping It Real About Valentines Day