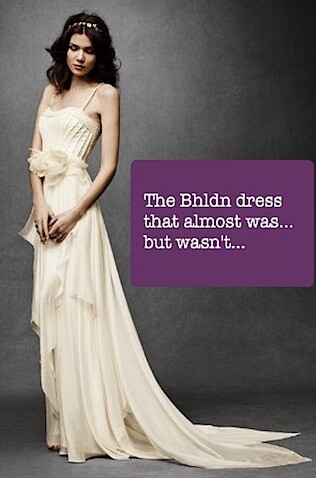 Last week, I finally committed to a wedding dress…for the second time. With just over three months to go, everyone from the butcher, the baker, the candlestick maker (not really) had something to say about my lack of dress. It was only as I was about to ‘make the leap’ that I recognised the stark similarities between my finding the ‘right’ dress and the search for the ‘right’ relationship.

So many people told me that when you find ‘the dress’, you just ‘know’. I’m sure this happens for some people, but in truth I built up this idea that I’d be swept off my feet so I ended up being in search of a ‘feeling’. As any of you know that have pursued this ‘feeling’ in relationships, this can send you down some blind alley’s or leave you wondering if you should feel ‘more’.

I could give a long list of what I didn’t want, but wasn’t quite so hot on articulating what I did want. With normal clothing, I have distinctive style values – this wasn’t the case with ‘the dress’. I assumed they’d become clearer during the search and ending up being confused, overwhelmed, and sidetracked. It’s not about having a master list of relationship criteria that’s longer than a grocery receipt for a family of six; it’s about having a clear view of the bigger picture and your core values.

I had some very strong preconceived ideas about what would suit me. In the end, I’ve ended up with something totally different to what I would have expected me to go for but it’s totally me. I was also way off track on some of my ideas, which brings me neatly to..

As I’m an Anthropologie addict, I started this whole process convinced that I was going to go for a Bhldn dress, and so when I started looking for dresses here, these dresses that I hadn’t even seen in the flesh were always in the back of mind. This ended up being like an ex hovering or that person you fancy that’s been lingering in the back of your mind even though nothing’s happened between you.

Some of the stores/designers kept telling me to go with the flow, to keep an open mind or convince me into dresses that I liked, but I didn’t love. It’s true that I did need to be a little more open-minded but that’s very different to taking on their mind or values. There was too much ‘noise’ and some of them meant “Go with the flow to the cash register…” This of course can happen in relationships and the truth is, no good will come of going along with someone else’s terms when you don’t really know them very well and it ticks their boxes, while leaving you ‘hungry’.

I admit that I brought the dress thinking “I’m not keen on the straps but I could get them taken off”. On a few of my mental visions, I had a niggling thought that it might be princessy (not my thing at all) but I shrugged it off. This reminds me of ‘fixing’ in dating and overriding concerns. Turns out it was princessy.

I was really convinced of my ‘chemistry’ with some of the Bhldn dresses plus it turns out that looking at the frickin’ dresses a gazillion times (mild exaggeration) and thinking about them had me building sandcastles in the sky. In truth, after finally ordering a dress and it arriving and me being hit with some whacking import charges (failed to do proper ‘discovery’ there in my excitement…), beautiful as the dress was, it was much bigger in volume than it appeared (snort). It’s a bit like ripping one another’s clothes off and pouncing on one another and the ‘chemistry’ falling flat.

I ended up thinking “How the frick can I be standing here in a dress after busting my proverbial balls and thinking about it so much, only to feel underwhelmed? Why doesn’t it look and feel like I thought it would?”

In dating and relationships, what I often see is people in this same situation who then go on a crusade to make their ‘investment’ pay and meet the forecasted potential. I wasn’t about to convince myself into something that just wasn’t right, no more than I would convince myself or someone else into a relationship that didn’t feel good.

Online dating is similar – don’t spend too much time oggling the photos and building sandcastles in the sky over text, sexts, email etc. Meet them pronto otherwise you’ll have unrealistic expectations and false perceptions.

Initially, I was resistant to deviating from my ideas, which is like resisting deviating from ‘type’ even though your type isn’t working for you or it doesn’t even exist. Not only did I need to be more open minded, but I needed to prioritise so that I didn’t end up compromising myself for what may be completely unimportant ‘wants’ in the bigger picture.

I actually had ‘chemistry’ with a few dresses but that still didn’t make them the dress for me – nuff said.

A couple of people told me I was being “too fussy” and that I should give various gowns another chance – this is pretty much how I ended up dating most of my exes!

After arranging to send back the first dress, I half-heartedly went to a wedding show last Friday to check out decor ideas because I couldn’t imagine that I would find my dress at something like this. After checking out the first aisle of stands, I turned onto the second and then caught sight of a vintage wedding dress stand out of the corner of my eye. Within moments I spotted the dress, which was very similar to another dress I’d tried on but had balked at the eye watering price. It looked stunning on and even though it’s not showing booby area as I imagined my dress might, it doesn’t matter – it looks and feels just as I’d like it to.

Shortly after, I met up with the boyf and we actually had a great time at the show, which ironically is a bit like when we both went to that charity event where we ‘noticed’ one another – we’d both gone under duress of our respective friends and ended up having great evenings.

I had to make a decision before leaving the show (I’d nabbed the sample) and I went and told the designer that I wanted it and after feeling relieved, I then started to panic. What if I was being too hasty? What if there was an even better dress? What if I got it and then it turned out I’d made a big mistake? I ended up going home and ruminating.

Talking to the best man a few hours later (he’s a stylist), I said out loud something that had been niggling at me: “I think I have commitment issues! With my dress I mean!” In his typical sarcastic fashion, he said “Uh…yeah!” At that moment, I realised I needed to get my act together and within the hour, I’d arranged to buy the dress. Once I made the decision and got behind it, I haven’t looked back.

Commitment is a conscious decision and a choice reflected in action. You’ve got to make a decision to choose and keep choosing day after day after day.

If I chose a dress and then spent my time wondering whether I could do better or looking around at other dresses, I’d have undermined my commitment. It’s the same for the person who commits to the relationship and then panics about what’s involved and puts more energy into second guessing their decision than they do into living their decision.

PS I haven’t linked to the dress so you’ll just have to wait!

Podcast Ep. 209: The Compatibility Factor
Make Me Official: The Obsession With Titles in Relationships.
Compatibility, Your Type, and Common Interests Part Two