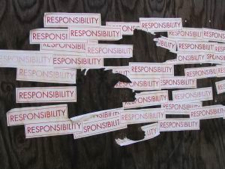 I was reading comments on my recent post ‘He broke up with me because he met someone else – Is he a bastard?’ and a couple of lines from one commenter stood out because they reflect a problem that is at the heart of our poor relationships with men:

‘But, if he had said that things didn’t seem to be working for a few months already, why didn’t he just have the balls to end the relationship at that point and be single for a while?’

Now whilst to a certain extent I can understand why we say and think things like this, it is half hearted view because there are two people in a relationship, it takes two to tango, and why should it be always down to the man to opt out of the relationship? In fact, this mentality raises some key questions that I’m hoping will get your opinions flowing:

If he doesn’t have the balls to end it, why don’t you end it?

If he doesn’t think that things are working, what is it about the relationship that works for you?

If he doesn’t want you, why do you want him?

If he is not being the man you thought he was or believed that he could be, why don’t you end it? Why do you expect him to change?

If his reaction to you treating him well is to treat you poorly, why do you keep endeavouring to treat him better?

The questions exist because of the lack of responsibility that we have in the relationship – The onus is being placed on him to take action and to change.

If you’re staying no matter what, the likelihood is that if a guy turns around and says ‘This isn’t working’;’It’s over’, you will still be invested. In fact, you’ll be hearing him, but you won’t be listening.

The general response of a Fallback Girl to a struggling relationship or their guy who doesn’t think it’s working or is half hearted? Try harder, self-blame, keep telling him she loves him, keep saying she’s the best woman for him, keep trying to get him to change, keep going back again and again…

If you’re happy to be in a relationship that someone else has been saying is struggling or that he wants out of, it’s very difficult because really, you’re both co-existing on 2 different relationship planets. If anything, he’s disrupting your sense of reality and this is what many Fallback Girls struggle with. The assclowns and lazy men out there do pick up on this and they get into a mentality of ‘She’s going to keep trying/talking/asking/whatever’ and just go with the flow, try for a while to meet your expectations (if he’s decent) but then come back full circle, or be half hearted or no hearted about trying if he has already pretty much decided that the relationship is a no go.

In getting into reality, we see the truth, and that involves ‘us’ and it will involve some level of change on our parts. By going along with things and being happy with a struggling with a relationship, you are buying time whilst you avoid confronting your fears or seeing things about yourself that you may need to change.

As I’ve said before, you don’t need the words ‘let’s break up’ for a relationship to be over. Some are over long before it becomes official, it’s just that we cling, we try, or we even flog a dead horse.

Many people do end relationships but the problem of women who love emotionally unavailable men and assclowns in general is that when you have two people who don’t want to take the responsibility of ending things, you get a life in limbo. The only way to change things is to put yourself in control of yourself and your relationships rather than giving away your power to men. Don’t be helpless.

When we come back to the original question asked in the comments, yes he could have ended it sooner but so could she. She was there too.

My new book How to Lose an Assclown in 90 Days is due out soon but if you want to get ahead on understanding your relationship struggles, especially with emotionally unavailable men, there is also my ebook, Mr Unavailable and the Fallback Girl. Find out more and download.

Actions Matching Words in a Nutshell: If You Haven't Got a Match, You Haven't Got a Healthy Relation...
Can you stay friends with Mr Unavailables & Assclowns after you break up? Part Two
How To Cope With Being The Other Woman
Share this...