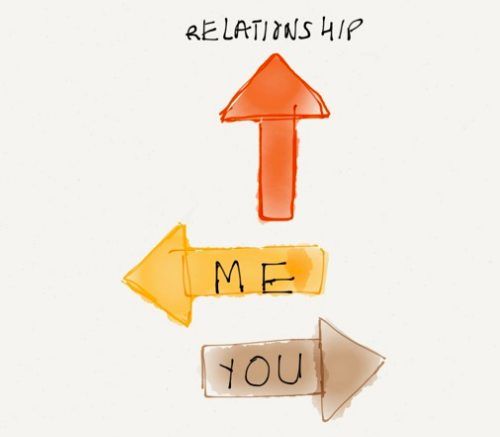 When you’re in a relationship where you have conflicting values, it’s likely that it’s going to end because ultimately you both want different things. It’s not a judgment on either of your characters but it is that recognition of an incompatibility that can’t be ignored, although that’s not to say that you won’t attempt to play it down or to hope or push for change.

Discovering that you want different things isn’t unusual and it’s what getting to know someone during the discovery phase of dating and throughout your involvement involves. Of course it’s a pain though, because you invest yourself to some degree (possibly a lot) and there will be hopes and expectations tied up in your involvement and so the disappointment can be hard to deal with.

There can be this conflict between your feelings about this person including your hopes for them but also your feelings and hopes for you too. The right decisions don’t always feel good and certainly aren’t easy and it takes real courage to recognise your needs, acknowledge where there’s a deficit and to assert yourself so that you’re continuing to be true to who you are… even though you have to feel some pain.

Of course if you go in the other direction, that pain can accumulate and the stakes can seem higher and higher making it difficult to exit due to not wanting to feel like it was a ‘waste’ and then spending more time feeling regretful when you could be out.

Relationships teach us a hell of a lot about ourselves and when they don’t fulfill our needs, wants and expectations, what we learn from the experience if we’re willing to listen to the feedback and grow from the insights, can help us to not only find a relationship more befitting of us but to better serve ourselves through self-awareness.

Sometimes it takes a while for the conflict in values to unfold and often there can be an awareness that you wanted different things and you may have even recognised code amber and red issues but you hoped that due to the way you felt, plus the things that you hoped for and even what was expressed by the other party, that your paths would align.

It might be that there are certain core values that you appear to share but on the personal values front which governs character and represents the values you take for you, the conflict on these makes anything pretty damn difficult. You might both profess to want the same things long-term but if there are issues around trust, honesty, integrity, reliability etc, this undermines those long-term plans.

On the flip side it might be that it’s actually fairly harmonious on the personal values front so you really get on and feel like you have a lot in common but there’s other diverging core values such as your relationship or religious values.

You both want different things.

Now granted that this is an issue in itself if you’re going to stick around (and not find a healthy resolution) but the real issue is when you think that you’re ‘wrong’ for having your values.

You both want different things and when you judge you for not wanting the same thing or for essentially not being the same person, you’re saying that the things that you need, want and expect in order to be happy and live your life authentically are ‘wrong’ and theirs are ‘right’. You’re judging who you are as incorrect while pumping up this person.

When you use the top line data that you want different things to judge you instead of using it to judge the situation and respect who you are, you’re saying, “I’m wrong and my needs, wants and expectations are invalid or at the very least less important.”

Exactly what kind of relationship were you going to be having with this person who is now on a pedestal looking down on you?

It’s this idea that if you were “good enough” that they’d either change their values or that you’d be able to manage to live their values and forget your own without feeling like you’d been run down by 20 buses. It’s also this idea that you can pretend that you don’t matter and that if you sign up to their agenda now that at a later date you’ll ‘get yours’ because by you proving how far you’re willing to go, one day they’ll think, “Wow. Yeah, let’s do a swapsie and live their values now.”

Stop telling you that you’re ‘wrong’, that you don’t ‘deserve’ to have any needs or that you ‘should’ take a back seat, and that true loyalty and devotion is being willing to forget you.

You want different things. You don’t want what you want because they’re a ‘failure’ or ‘wrong’ as a person so why does you not wanting what they do amount to you being these things?

Making you ‘wrong’ is about blame and your perspective on you. It’s not about the actual relationship because if this is where your attention was truly focused, you wouldn’t be judging you as wrong and instead you’d be paying attention to whether you truly shared the core values to copilot a mutual relationship together.

You want different things. This can tough to reconcile but what it isn’t is a representation of your ‘failure’ as a human being.

You may want to go in the direction of a relationship but if they’re not going in that direction then you’re not either.

When someone's imposing something upon you, they're trying to remove your choice (and overstepping y...
Despite 'good points', we deal with the consequences of people coming as full packages
Understanding your core values in relationships (no they're not your common interests)