Sometimes we’ve got to do remorse on our own time 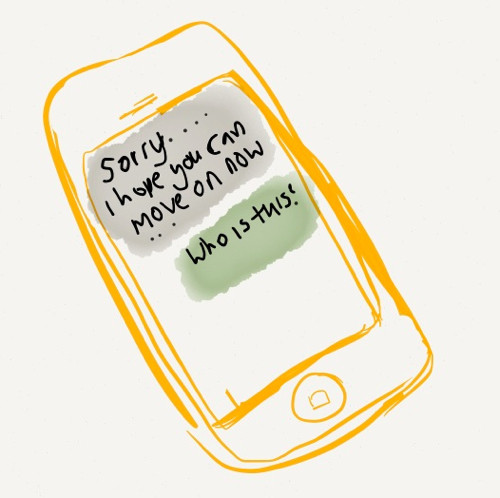 In our significantly more connected world, it’s so much easier to respond to feelings of remorse in an instant with very little consideration about what we’re doing, why, and the potential ramifications of our actions. When I receive emails from people who recognise themselves in my posts or in reader comments and they say something like, “I’ve been reading Baggage Reclaim for a few days and I realise that I’ve been Mr/Miss Unavailable – do you think I should get in touch with my ex?”, my first thought is, What makes you think that this person wants to hear from you after months or even 1/5/10/15/20 or even 50 years?

Sometimes we’ve got to work things out on our own time. It’s too much to assume that when our conscience strikes us, we can just pick up from whatever point suits us and expect that whoever we’ve wronged will put aside time to make us feel better.

When you’re feeling tempted to try and turn back time it’s because in recognising where you’ve erred and feeling bad about it, you may want to attempt to make things right. It’s having a sense of regret and possibly assuming that the way to move past it is to ‘go back’. Of course the problem with this is that while right now your past deeds may be burning a hole in your mental pocket of remorse, it’s presumptuous if not a tad self-involved to assume that what you’re thinking about is the other party’s burning agenda.

Sometimes we don’t conduct ourselves in the best of ways. Sometimes we make choices and are so caught up in how things suit us that at the time we don’t really give enough due consideration and respect to the other person’s needs, wishes and expectations. Sometimes we miss out on an opportunity and essentially look a gifthorse in the mouth and then maybe when we hit one too many bumps in life’s road, we suddenly think that that was the perfect opportunity or our lives would have been so much better if only we’d done X/Y/Z with the person who we now believe we’ve wronged.

Whenever your conscience and a willingness to learn from the insights of your experiences, actions and thinking decides to strike, this is a good, but be careful of trying to distract you from those feelings and thoughts by attempting to take a shortcut.

Are you reaching out to this person as a quick fix to feel better or have you already been through your own thought process and been applying what you’ve learned to your present?

I’ve heard enough painful tales of remorse and reunions gone wrong to know that there’s such a thing as short-term remorse where you see/hear/experience something and it appears that you have an epiphany, and then you feel bad and in order to feel better, your knee-jerk reaction is to call/email/send a Facebook message (yes really)/text (I’m not joking)/turn up on their doorstep (for real). After reaching out and relieving yourself of your uncomfortable feelings, you ‘suddenly’ become aware of reality and possible expectations created by your return / declarations and because you didn’t take the time to truly feel your feelings and come to terms with what happened and learn from the insights you would have gained along the way, you end up doing something that compounds the original misdeed and likely negates your recent expression of remorse.

I remember bumping into an ex in a club and he was straight over asking why I’d been ignoring his calls, how sorry he was about the way he’d treated me, that he’d realised he was in love with me and yada yada yada. As I listened to him, I realised that I’d already worked out what was what and that if he’d really felt that bad, he’d leave well alone instead of thinking he was entitled to another go round. I thanked him for apologising but stressed that if he felt bad, that’s something he needed to sort out on his own time not mine. That was the last time I heard from him.

I’ve had more than enough fantasies about various people showing up and throwing themselves at my feet begging for mercy and another chance and then whisking me off into the sunset to know that reality does not live up to the dream. Closure can be done without having the other party admit ‘everything’ and guess what? Remorse can be done on your own time too.

Before you think about getting in touch consider the following:

If there’s more benefit to the other person than there is to you because you help them lay something to rest, then getting in touch can be a good thing but if it’s mostly your ego doing the talking, it’s not. Sometimes feeling bad is like pass the hot potato – you just want to pass the dodgy feelings on to someone else and get back to life as you knew it before this was on your mind.

There are things I’ve done that I could go around calling/texting/emailing/Facebooking people over but I practice what I now know, now and going forward. Sometimes when we feel bad about the way we acted, we apologise and ask for or even demand forgiveness because we want them to hurry up and make us feel better and to possibly extend another chance. We’re human and we make mistakes but I think it’s safe to say that it’s a bit ‘off’ to wrong somebody and then put it on them to make us feel better about it. If you feel that bad about something, learn from it and pay it forward in your future interactions.

Knowing if you’re on the right track with No Contact or getting over someone
Telling Them All About Themselves – Why It’s Not Your Job To List Their Flaws and Crimes
They Don't Own You: When Someone Thinks That They Have A Claim On You
Share this...