Stop Minimising You (You have needs too!) 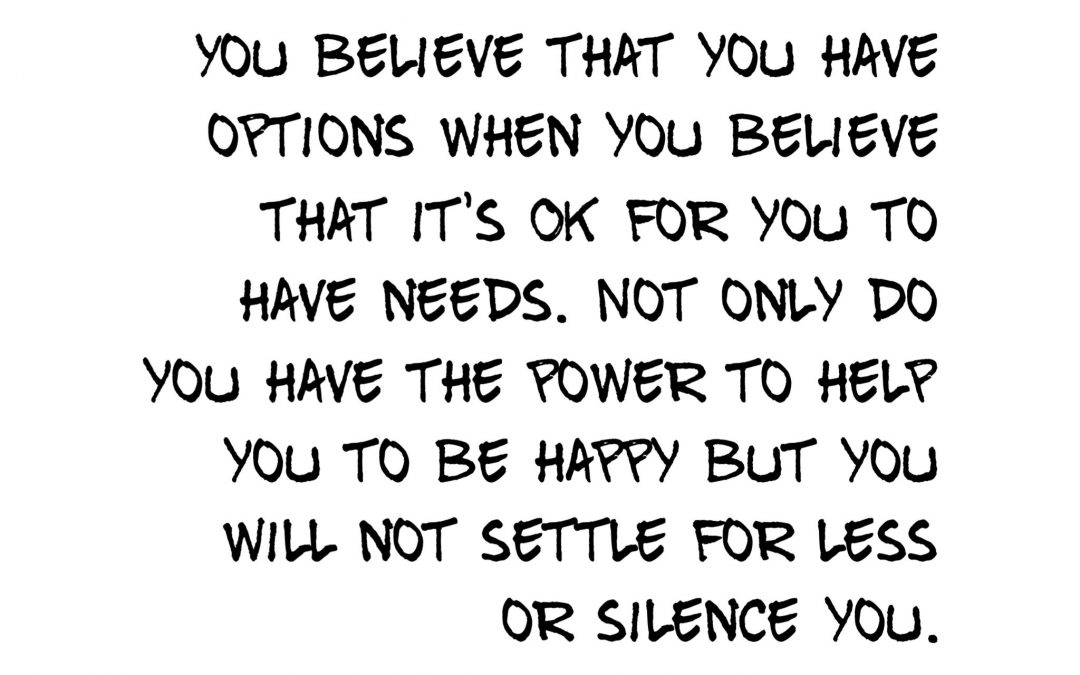 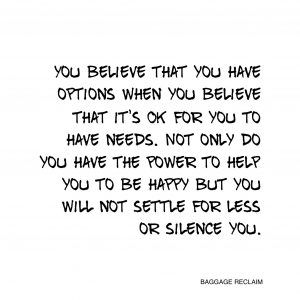 There is this fear (and I know it well), that if you express what you need, especially when a need involves another party, that the need will go ignored and unmet. You might fear that it will be ridiculed or criticised or superseded by yet another thing or person of ‘greater value’. It can be tempting, especially when you’ve grown up or been around people who shut down your needs or ignore, invalidate them, or claim that theirs are of greater significance, to ‘just’ put your needs on the back burner.

Why would you expose you to further disappointment and rejection? You might feel that the pain of putting your needs out there and them not being met is far greater than not doing so. But is that true, especially when you consider that needs that are closed off from others get closed off from you too? It’s not as if you’re going to voice those needs to you and take care of them because that would open you up to recognising those said needs and being vulnerable enough to ask for what you need whether that’s directly asking for it or making the decisions and the supporting choices that would make having those needs met possible.

How can you and others begin to meet needs that you are stifling and even invalidating?

Each time you deny, rationalise, minimise and even excuse what you or others are doing to you that cuts you off from your needs, you’re defending against the case for you being a worthwhile and valuable person with needs. You’re living your life in a way that keeps reinforcing and validating the original reasoning used to reach the conclusion that you ‘shouldn’t’ give voice to your needs. It’s as if you don’t matter, but of course you do.

One of the greatest injustices that any human can suffer is to be treated as insignificant and be robbed of basic needs. If you look at your life and see it as one long parade of you pandering to the needs of others while you yourself are experiencing malnutrition, that’s grossly unfair and entirely unnecessary.

Stop robbing you to boost the ego ‘coffers’ of others.

You also have to recognise that the only person who can ever really know and show the line and the limit of what is possible with you, is you. Granted, there can be outward signs that you are doing and giving at too great an expense to you but the person who is best placed to notice and respond to that is you.

People won’t be able to pay you back in a way that would even begin to make up for the pain that you’re continuing to put you through but at some point, you have to fight back against the old judgment against your needs, step by step, ask by ask, no by no, one day at a time. It’s not an overnight change and it does feel damn weird to say what you need or to ask for it or to look specifically for something, especially when your habit has been to just do your usual thing and hope that life and certain people will just figure it out. It’s also hard not to expect a yes every time.

Part of the resistance to voicing needs is admitting and/or accepting that who you want to meet them might not be able to or even want to.

Now, it’s true that not everyone is going to be able to meet your needs or to meet them in the way that you expect but there’s something that you need to be honest about when you’ve been in the habit of minimising you by suppressing your needs out of fear of the possibility of that person not being able to step up:

If your belief is that there’s no point in voicing your needs, you live your life in a way that validates that belief, otherwise you’d have to believe differently. This means that you’re going to set you up for a fall that reconfirms that belief.

By asking somebody that reflects the belief by behaving in ways that are reminiscent of the very people that influenced your perception of your needs, you’re ticking that box again. As I said to a friend recently, “If you keep asking the person who hasn’t got a penny, to buy you a house, you’re blocking you off from what you want…. Why do you keep asking the people who you know cannot empathise [because they demonstrate it via their actions] to love you and do things that empathetic people do? The fact that he and similar people do not empathise doesn’t mean that you’re unworthy or that all people behave in this way. You would not be recreating this experience time and again if you were forging relationships with different types of people”.

If you keep putting your bucket down empty wells, does it mean that the world has no water supply?

Knowing where you stand is an important facet of life. If you value something and someone else doesn’t, accepting that paves the way to you being in a situation more befitting of you.

Fear of knowing where you stand comes from fear of taking ownership of your needs and fear that it will hurt to know. It’s also fear of abandonment but the abandonment happens at the point where you give you up. The pain of knowing and acting on that is far less than the pain of continuing and abandoning yourself in the process.

Don’t recreate pain by putting you in your own Groundhog Day. Instead of writing you off and inferring that there’s something wrong with you because such and such a person or a certain type of person isn’t able to meet your needs, it’s time to ask who it is that you’ve been asking and whether you’ve been setting you up to fail, not necessarily because you consciously want to block you but because in your quest to avoid ever being ‘back there’ where you were hurt, neglected and more, you’ve ended up continuing to live in that past by inadvertently recreating aspects of it.

But you don’t stand in the past anymore so you don’t have to keep minimising you.

A good place to start with understanding your relationship with needs is to write down the needs that you feel others have including any that you feel responsible for meeting. Do you have any of these needs and if so, which ones are currently being met? I bet there’s a deficit. If you take those needs one by one and ask you why you don’t have those same rights, it will reveal your fears and beliefs in this area. You can not only use this as a jump-off point for further exploration but you can also start looking at how to level up so that these relationships are mutual. Ask you what you fear will happen if you ask/state/embody what you need and whether what you fear is true for the person or whether it is in part about your own tape running on repeat. It is worth your while to do compassionate exploration because anywhere where an imbalance continues is where resentment and pain will take hold.

If you feel bad after you 'help', it probably wasn't 'helping' (Why it's good to stay out of Other P...
Relationships are 100:100 - It's Tricky To Divide Up Relationships & People Into Halves
We don’t want to do the hard thing, but we do want the freedom it offers