We Don’t Have To Agree On Everything, Especially With Loved Ones 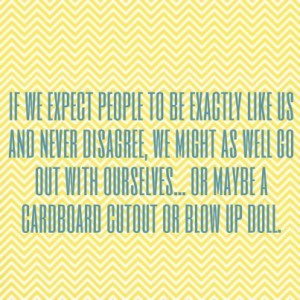 When I talk to people who are afraid of what they think that being in a relationship means, or with frustrated couples, one of the underlying beliefs that can cause a multitude of problems, is this idea that they have to agree on everything. Eve-ry-thing. Have to. That’s why I’ve heard from so many people who pursue their idea of a soul mate – somebody who thinks, feels and acts like them all of the time. I’ve yet to meet anyone who is with someone like this but I have come across many people who believe that they had this vision within their grasp for a period of time. Of course real life came along.

If you’ve been thinking that you’ve got to, you’ve been setting you up to fail. If you’ve believed that you can disagree but then you feel really rejected, wounded, and possibly tend to bail/attack when people disagree with you, there’s an underlying belief that you have to agree and that disagreeing means something negative about you and/or the other person, or it’s assumed that the relationship is doomed. Hell I’ve seen people assume that their jobs are doomed due to a disagreement!

If you’ve had one of these ‘soul mate’ relationships end, you’ll likely have felt terribly wounded by the loss, or if this person is still around, disappointed that they haven’t lived up to this expectation while possibly blaming you or feeling cheated. “You screwed me over! You’re not perfect!” “I want a refund! You’re not my Siamese twin!”

If we want to go out with or be around people who are exactly like us so that we get to live out our version of “Well if it were me…”, we might as well go out with ourselves or one of those cardboard cutouts that they use for promotional displays, or even one of those ‘human’ blow up dolls.

We don’t have to agree on everything. Find me the court order, the commandment, or even the life rule that states that we must do this. I guarantee that you won’t find it.

The only person who thinks, feels, and acts like us all of the time is us and that’s only if we’re being authentic. Some of us are such people pleasers that we’re playing multiple roles at any one given time, all with an invisible doormat costume.

A painful tale I’ve heard numerous times is the one where we think we’re with The One and then we have what seems like this minor disagreement or even a big legitimate disagreement and… that’s the end of the relationship. We kick ourselves for having said anything and play the whole scenario in our minds over and over again. We trick ourselves into believing that if we hadn’t argued at all that we would have lived happily ever after and feel punished for disagreeing.

“I thought we could have worked through the disagreement like normal couples do” has been said to me many times.

Sometimes we recognise the crack pipe thinking and tell ourselves that it’s not that we could never have disagreed but if we’d held off having any disagreements until year two instead of say, month three, that we could have weathered the storm and lived happily ever after. We scared them away by being human. Yeah…

How people deal with conflict along with the inevitable bumps in the road, tells you a lot about who they are. Most people can seem like The Best Person On Earth during the honeymoon phase or when things are running smoothly. The person who will end your relationship over an argument, especially if it was petty or the result of needing to discuss something that was a real issue, doesn’t do conflict management and that’s not conducive to a relationship, never mind a healthy one.

When you hold onto this belief that you have to agree with others on everything, you’re effectively shooting you in the foot and removing your power before anything even happens. It promotes conflict avoidance so you’re going to suppress your true needs, wants, expectations, feelings, and opinions, out of fear of causing disagreements. Either that or you’ll be at the aggressive end of the spectrum and will attempt to coerce and even bully people into seeing and agreeing with your point. Of course when you railroad people into this, you’re never truly confident that they agree with you – they’re either scared of you or just hoping you’ll move on. Actually they’re probably exhausted as well…

When you expect never to be disagreed with, it’s avoidance of stretching yourself and doing due dilligence, after all, if you assume that everyone ‘should’ be like you, how much work is really involved with getting to know someone?

You can love someone and disagree with them at times. You are two different people. Love does not equal ‘Always do as I say and expect’; that’s control.

I used to be terrified of not agreeing with people as if I expected to be laid into verbally or physically. I either bailed, retreated, or if I’d been simmering like a pressure cooker for a while, exploded. I was also guilty of deciding what people ‘should’ say and then being mad at them for not reading my mind. That’s just not healthy.

I don’t feel judged when I have disagreements (unless I actually am being) – when we put the energy into judging the person or ourselves, we forget to listen and possibly end up being super-defensive. When there isn’t an expectation of being agreed with all the time, you expect that you’re going to differ in opinion. Yes some disagreements will be harder than others but each one teaches you more about you and the other person. If you can’t disagree, you can’t have a relationship with that person because it omits reality, respect and trust, and that’s just for starters.

Podcast Ep. 258: It's Not Our Job to Meet Our Parents' Expectations
Podcast Ep. 200: The One Where Nat and Em Hang Out
Knowing the line between putting you first and being "selfish"