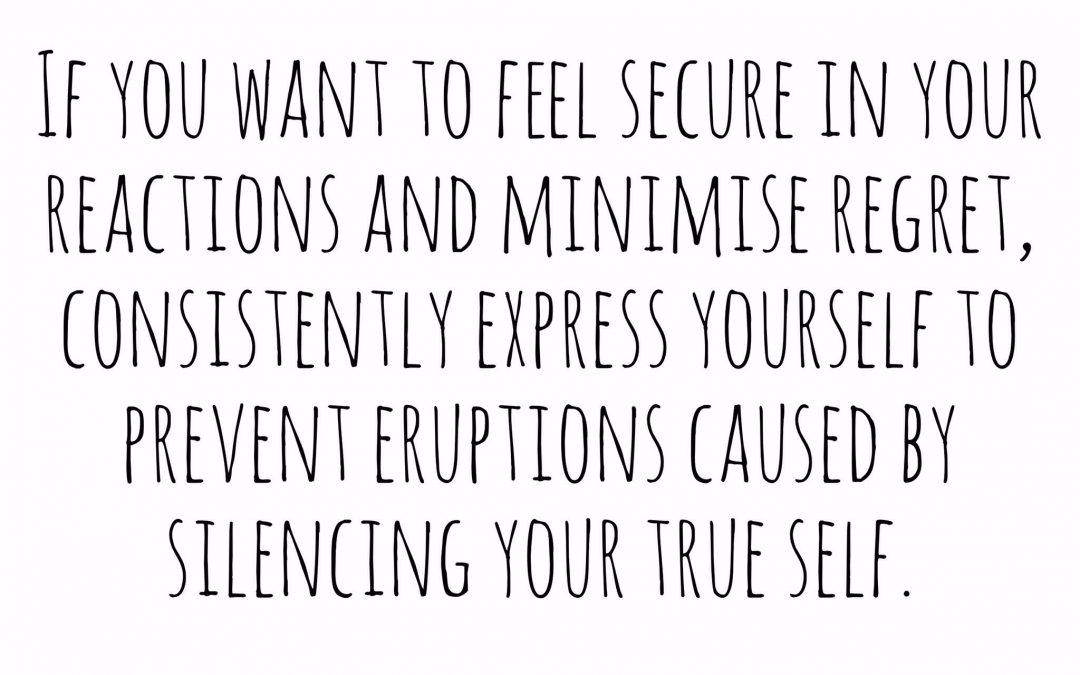 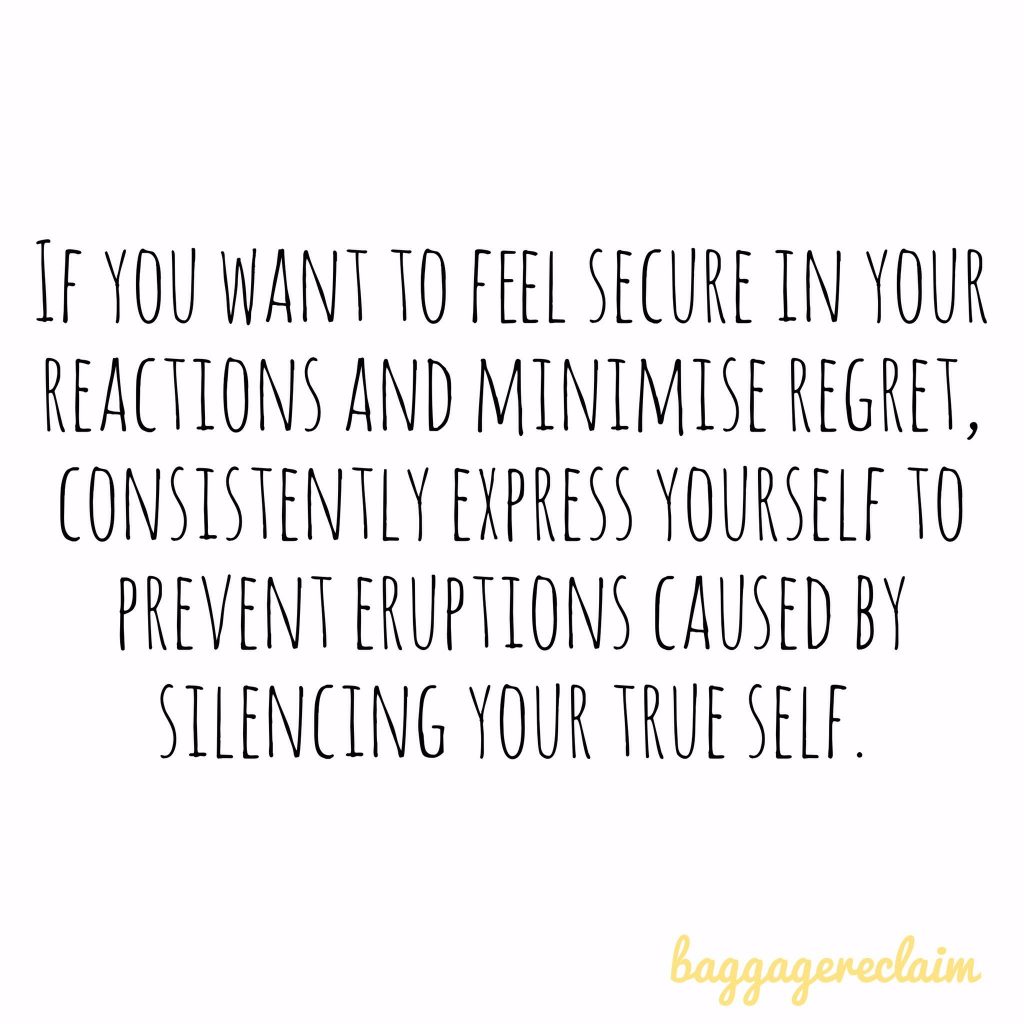 There are times in life when I’ve given myself a hard time for how I reacted to something in the moment. Note that I, like many others, have given me a far harder time for having feelings and opinions than I ever have for underreacting to boundary busting behaviour!

Now of course, if I had my time over again, there’s a few things I’d do differently in the moment, but to be fair, reactions, especially 1) belated 2) cumulative, and 3) helpful ones, would not be high on my list.

Underreacting has kept me in shady situations long past their sell-by-date. It’s also triggered analysis paralysis.

My version of overreacting, which contextually, it may not have been or it certainly wasn’t as bad as I’d portrayed, has often triggered the alarm bell and reminded me to steer clear of that person or situation.

When I have responded disproportionately, yes it’s given me a cringe and in darker times, a lot of shame, but overcoming this involved self-compassion through seeing these responses for what they were – feedback to understand and evolve me.

The single most useful thing about a reaction is that it provides you with clues as to your inner state, your thought process, and the overall situation.

Readers often say to me, “I feel so embarrassed/bad/ashamed/foolish/stupid/OTT etc., for how I reacted”. It’s wanting to control the uncontrollable, driven by the desire to be in control of that person’s perception of you. On some level, especially if you’re typically a pleaser, you’ve been suppressing and repressing your needs, desires, expectations, feelings, and opinions in an effort to influence and control their feelings and behaviour.

If I don’t react, I won’t wipe out all chances for them to to choose me if they decide that they want to change.
Good Girls/Guys don’t get angry.

We are human. We love, we want to be loved, we don’t always make the best of choices and yes we do make mistakes, plus to top that all off, we’re keen for acceptance and scared of rejection both real and imagined.

This doesn’t mean that we cannot learn from our reactions and use the insights from the feedback of these experiences to support ourselves to evolve beyond being in a pattern of reacting this way, plus it doesn’t absolve us from being conscientious but, how we reacted in the moment is how we reacted. Sure, sometimes that reaction is part of a pattern but sometimes our reaction to something in the moment doesn’t reflect who we are in the main. If we choose to focus purely on the reaction instead of engaging in the self-care that involves understanding what was behind the reaction, we miss the positive lesson we stand to gain. We also cannot move on from it and change our subsequent responses.

Genuine remorse and/or recognition of where our responses to something were less than what truly reflects us, is what separates us from those who habitually use and abuse and pull the crocodile tears to express faux remorse as a means of manipulation to pave the way to doing the same again or worse.

We focus on our reaction because we’re deceiving ourselves. We become convinced that if we had played it [our reaction] down, we could have controlled the outcome or even their subsequent reaction. We think, I reacted that way so now they see me as ____.

Many moons ago, I finally started dating the subject of a lengthy flirtation. It was one of those situations that so many of us experience with a Mr (or Miss) Unavailable, where in retrospect, you realise that the fact that things were so ambiguous and drawn out, was a clue that they weren’t available or indeed, single, while engaging you. It’s easy to rationalise that they’re so crazy about you, they’re trying to work up the strength and nerve to ask you out.

A few dates and a night out, and we, along with my mate and his friend, wind up back at his place. Alone in the bedroom, he said the words no woman wants to hear half undressed;  “I’m sorry. I’m not over my ex”.

Cue torrential tears. I bawled like an American fire hydrant – great big, loud, gulping, waaaah sobs, seemingly shooting out from every direction. It was part too many gin and tonics – used to make me a bit maudlin – and in truth, too much suppressed pain bursting out. He ‘rejected’ me in a very vulnerable moment. Valuing me very little beyond my ability to attract guys, his admission catered to my worst beliefs. Right there in the moment, I knew it was a disproportionate reaction – I wasn’t really that into him – and was thinking, Bring it back Nat! Leave with your dignity!

My friend came racing in, and after demanding to know what had happened, told him off and somehow we both managed to flounce out. I was mortified by my reaction and a few more torrential tear sessions and I became more mindful of not using booze to escape myself or my pain. I wasn’t just responding and reacting to him – I was responding to the feelings and memories of the past that were resurrected. Banshee Nat wasn’t me.

It’s not about the ‘right’ or ‘wrong’ reaction – that triggers perfectionism where there’s the expectation to have the perfect response. We are self-critical creatures. Even when we do right by us, we wonder if we did it wrong or whether we could have done it better, as if we’re never going to be in a situation where we’ll have to step up for us again and have missed our slot.

Life provides numerous opportunities to improve upon and transcend past responses.

If when we are wronged or we feel hurt, we then judge our responses while not addressing the wrong or the source of pain, we are telling ourselves that it’s wrong for us to have responded. We are self-censoring as well as blinding ourselves to reality.

The more we’ve previously suppressed and repressed our feelings and opinions, is the stronger our reaction will be when we’re tipped over our stress threshold.

A strong reaction doesn’t necessarily equal a disproportionate reaction. As I explained to one BR student recently, getting angry when your boyfriend meets you for a drink, dumps you, and then admits that he got off with a mutual friend two days before, isn’t OTT. Anger is a valid and necessary emotion letting you know when we feel wronged. If we are conscious, aware, and present, it’s easier to distinguish between real injustices and those imagined ones created by ego.

Contextually, our reaction may seem disproportionate or ‘bad’ simply because we’ve not responded before or it’s not what the person expected – they may have expected that we’d take it lying down.

You cannot turn back time so use these experiences as Emotional Turning Points – standout moments in your life that put you on a more conscious path. Learn from what you don’t like about the experience, apologise (if needed or just to yourself), and move on from it so that you translate the lesson into growth instead of stagnation. Note that apologising for your actions is about owning your own. It is not about taking ownership of the other party’s behaviour.

You may not have chosen your response on the occasion that you wouldn’t mind wiping off your record but you get to choose your next and subsequent responses, as long as you’re willing to listen to yourself and what the experience is trying to point you to. Your reactions will be more on point if you are conscious, because half of this regret malarkey is about ‘waking up’ after the fact and then wishing you had been awake to do otherwise.

If you have a pattern of responding in a certain way, it’s time to look at the theme and get conscious about the cues, triggers, and responses. Look at where you’re responding to the past instead of the present but also where you’re driven by fear and threat.

Breaking Up With and Getting Over a Married/Attached Man
Stop The ASSumptions!: 28 Dodgy Reasons People Give For Choosing Someone For A Relationship
Give up The Brady Bunch ideal - you're not alone with your less than perfect family