If someone has truly changed, there’s growth and a change in their habits 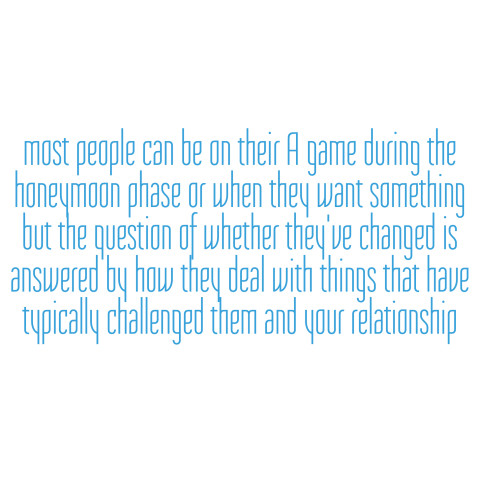 Over the years of writing BR, I’ve covered the issue of what to consider when someone is saying that they’ve changed and like all subjects I cover, I’m always looking for new ways to bring clarity to the situations and decisions that perplex us. Deciding to re-engage requires us to ‘take a punt’ because regardless of what is said right now, the truth of change is really only going to show up in the future where you get to see whether what is said and done now continues to consistently show up moving forward.

It’s not about expecting a person to never put a foot wrong ever again – they can’t promise to never hurt or disappoint you and you can’t expect that – but it is about growth.

How do you know if someone has changed? It’s really simple – you get a true sense of whether someone has changed when they’re faced with the typical situations and issues that have created the friction in the areas where the growth needs to come from.

For example, if the primary issue was how conflict situations were handled, you will see whether they’ve really changed when faced with the next and subsequent conflicts. If it was about being unable to commit, you’ll see whether commitment shows up in them following through and being able to deal with small, medium and large decisions. You’ll see if they’ve changed the next time things don’t go their way.

It’s very easy to claim change on day 0 but people who haven’t changed but claimed that they have or would, tend to either conveniently forget to talk about it and follow up with the actions (and you feel uncomfortable bringing it up for fear of looking like you’re on their case) or… they just talk about it and think that words are enough.

If someone has changed, their habits have changed which means that if they really have changed, they will not respond to previous cues (a signal that’s responded to in a particular way) and triggers (an event or thing that causes something to happen while also prompting a response) in the same way.

This is why it’s pivotal to be aware of what the issues were so that you are cognizant of what the typical cues and triggers are that prompt the responses which they’re now saying have changed.

Life will still keep chugging on and much as you might try to never put a foot wrong or attempt to prevent life’s inevitable stresses from happening, or even try to shelter each of you from those typical cues and triggers that have brought out the problematic responses, all you basically trying to be a Transformer and attempting to control the uncontrollable is going to do is bring you pain and a whole lotta bullshit.

If someone has changed, it’s not that those cues and triggers have disappeared – it’s that they’ve learned to respond differently.

Each time I’ve faced conflict, I’ve learned new things and over time I’ve got better at it, which is great because my old response was to storm off/threaten it which my now husband made clear after I tried to pull it a couple of times over disagreements, that it wasn’t cool. I was so mortified over my actions that I sent a rare email (we don’t send many) promising it wouldn’t happen again. I stuck to my word.  Incidentally, you don’t learn how to deal with conflict by avoiding it…

Most people can be on their A game during the honeymoon phase or when they want something but the question of whether they’ve changed or are changing is answered in the way in which they deal with things that have typically challenged them and your relationship.

Whatever it is, look for genuine growth (don’t make it up). If they’re still being, doing, and saying things how they used to then their habits are still the same. Anyone can pitch you something but they still have to deliver.

More on the BS Meter
Jedi mind tricks - Why we've got to stop claiming force & influence over other people's actions
The Ruse: Lying but claiming they can prove it's the truth