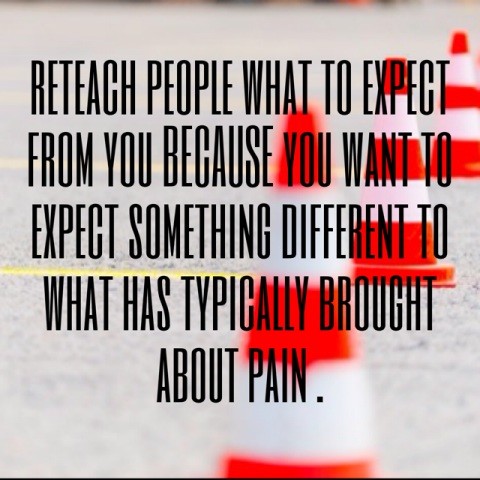 If like me you’ve ever had that uncomfortable realisation that someone has come to expect that you’ll be or do something that doesn’t work for you even though it works for them, it’s one of those sobering realisations that we teach people what to expect from us.

Us humans are remarkably predictable, even when we genuinely think that we’re not. You may know some people’s relationships better than they do because you’re more aware of their ‘cycle’ – you know that friend that swears “It feels different this time, I swear. It’s definitely over”. Again. We’re predictable.

It’s why I’ve often remarked to people who’ve struggled with their involvement in an unavailable relationship, that when you deal with someone who blows hot and cold, they become consistent at being inconsistent. If you pay attention to the overall pattern instead of only focusing on the hot bursts, which incidentally are probably only warm bursts because it’s coming off the back of a cold burst so feels warmer than it is, you’ll learn that when you feel the ‘hot’, you should expect ‘cold’ to follow and take this all as a sign to FLUSH. Even serial killers who try their damnedest to be random can’t help creating a pattern of some sort.

We’re all made up of habits. We deviate from time to time and of course go through periods of change when we become too uncomfortable with unhealthy habits of thinking and behaviour or we move in a different direction, but even then we change and evolve into new habits, hopefully ones that serve us better.

We teach people what to expect from us and sadly if we don’t have good boundaries, we can end up teaching them what they can get away with.

We ‘teach’ through the communication of our actions and words, including what we don’t do and what we leave unsaid. This is why people pleasing can be so destructive – it teaches people that we have no needs, wishes, and expectations and shows an inadvertent willingness to deviate from our values for their approval.

If you look at the relationships you struggle with like a series of habits, you’ll see a clear dynamic and a pattern of how each of you respond to certain cues (something that you perceive as a signal to think or do a certain thing) and triggers (an event or thing prompting that prompts you to respond in a typical manner).

When I sense or perceive conflict, I feel uncomfortable and my first response is to think of some sort of unpleasant outcome and go into avoidance mode, however, after years of getting out of my comfort zone, I now recognise that first typical response as my next cue to stop, look, listen, and deal. 99% of the time what I imagine isn’t the reality and it’s not worth the drama and silencing me for the 1% of time that it’s as expected or worse.

Over the years my relationships with certain family members have improved in the sense that they don’t have their old power over me. Why have they changed? Because I simply won’t participate – I no longer respond in the way that I used to. You want to dangle the threat of disapproval or even expulsion, or to criticise me, play games, draw me into drama or just expect me to play doormat, I’m not playing ball. My consistently different responses over an extended period of time means that I know and they know that the old cues and triggers don’t work.

It’s amazing how not seeking approval can clean up so many of your boundaries! If you also take your head out of the clouds and stop expecting people to change on each ‘chance’ you give, you’ll know what to expect from them instead of deluding you.

There’s been no announcement. I haven’t said anything using the word “boundaries” and I haven’t laid down the law about what people should and shouldn’t do – they can figure that out from what I do or don’t do, just in the same way that I’ve had to figure out others.

It’s the same with breaking up, especially if you have to cut contact – taking time out, taking care of you including addressing your boundaries and respecting them, communicates that this person can no longer expect the same responses from you to cues and triggers that have typically worked for them. You’re not doing it to manipulate him/her into giving you the relationship you want or to change; you’re taking care of you and being broken up. When you break, you break.

A reader told me how she’s still helping her ex with his resume, being a shoulder to lean on, networking on his behalf and other sorts of guff, all because she doesn’t want to be “mean”. Er, hold up a frickin’ second here! How can you expect to move on when you’re basically still being the lackey you were in the relationship? It’s not like he’s going to go “Thanks for all of that. Let’s get back together”!

If you continue to think and act in the same manner that contributed to you being in this dynamic in the first place, you’ll come up against the same issues. You can’t use the same habits that got you into problems to get out of those same problems.

Of course when you stop responding in the same way, this is where some folk equate feeling out of control with ‘desire’ or a signal to rise to a challenge and try new tricks in an attempt to get old responses, but if you remember why you’ve made the changes instead of thinking “Maybe they’ve changed and I can go back to being ‘old me’…”, you won’t get suckered in.

Change is for you first and foremost, not for ‘making’ others do what you want in a convoluted attempt to control the uncontrollable. Reteach people what to expect from you because you want to expect something different to what has typically brought about pain for you. When you teach you to expect that you’ll have your own back and that you’re not going to sell you down the river when given the first chance, you’ll teach others to expect that you’re to be treated with respect.

Fear of sacrifice, fear of commitment
Your growth or boundaries *might* 'upset' somebody, and that's OK
Are you overfeeding your worry and fear 'goldfish'?
Share this...