Believing It’s Impossible or Very Difficult To Change? If You’ve Changed To Accommodate Unhealthy Relationships, You *Can* Change 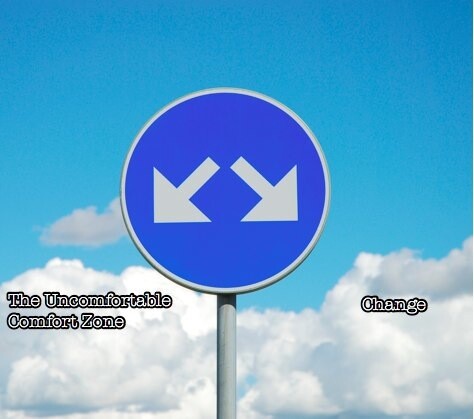 Reading about people’s struggles with dating, relationships and their self-esteem, a recurrent theme crops up – many of these people believe that they ‘can’t’ change. They talk about how ‘impossible’ it is to break habits, change relationship behaviours that are working against them, to fight a compulsion, to set and enforce boundaries, and basically get out of their uncomfortable comfort zone.

Often, they’re caught in a cycle of a long shot mentality, trying to extract love against the odds from a relationship that on some level they recognise they’re not going to be a ‘success’ at. This means that they can’t ‘fail fail’ because they’ve already accepted that they’re going to fail anyway, catering to the self-fulfilling prophecy that validates what they believe.

If you’ve experienced these situations, I’m about to throw a monkey wrench in the works that contradicts this belief that it’s impossible or very difficult to change:

If you have twisted, contorted, bent, back flipped, and basically become a ‘Transformer’, robot in disguise for your relationships, you have been making changes in what are risky, detracting, and at times even dangerous situations, which shows that you can change. In fact, you may even have found yourself in a situation where you made an exception to your normal mode of behaviour because you felt your love for someone was worth it.

You have changed and are capable of change, but if you’ve been doing it in these situations, it seems you only want to change when you know that there’s an eff up at the end of the yellow brick road.

Given the option between making changes that will benefit you because you’ll treat yourself with love, care, trust, and respect, even if it means making uncomfortable decisions that feel crappy initially but far better in the medium to long-term, or making changes that will detract from you and end up ticking the boxes of unhealthy and unrealistic beliefs you hold, you’re opting for what you know.

But if you’re saying that you can’t change or that it’s difficult, too hard, like a punishment to fight the compulsion, this is just not true. You’ve made changes that are difficult, hard, and are actually like doing hard time in Assclownville Prison – you just aren’t believing in changes that don’t have someone else at the heart of them.

If you can adapt your behaviour time and again to accommodate unhealthy relationships and people who have characteristics, qualities, values, and behaviours that are not congruent with your own, why can’t you adapt your behaviour in the other direction to make room for a you that likes and loves you?

From personal experience and the observations of so many relationships, I know that when you’re insecure and have very real fears that seem to permeate your existence, particularly feeling like you’re not good enough and being afraid of failure and making mistakes, you end up putting too much trust in the wrong people and situations and sinking your efforts into inappropriate relationships.

This disconnects you from you – your values including what you say is important to you in order for you to feel happy, good, and to live your life authentically – because you don’t realise how certain behaviours come across.

You may think that you ‘can’t’ change, but really you can if you have ever made excuses, abandoned your boundaries, made exceptions for inappropriate behaviour, tried to fit yourself around an unhealthy relationship, found yourself involved with an attached person, or have found yourself increasingly reliant on texts, email, and the internet.

I don’t think I need to point out, that unless you’re about 12 years old, texts, email, and internet haven’t existed in your lifetime. You have changed your behaviours around these means of ‘communication’ and meeting people.

Here’s the thing you need to consider if you’re still going to remain on the I Can’t Change or It’s Just Too Hard To Change or I Don’t Know If I Can Change tracks:

When you act like someone that doesn’t have boundaries and who appears not to give a rats about themselves, people will treat you as such, especially those that are reliant on you having little or no boundaries for them to dodge acting like a half decent person in a committed relationship.

When you don’t treat and regard yourself with love, care, trust, and respect and get treated as such, it only reinforces what you already think, exacerbating the very fears and insecurities you’re probably not doing the greatest of jobs at hiding.

It’s a vicious cycle, until you force yourself to get off it. On some level, you’ll recognise that your fears and insecurities are distorting what you see, hear, and feel…and yet you can’t, or should I say don’t stop. Why? Because if you did, it would rely on you trusting yourself. I should add as well that this vicious cycle only gets nastier when you realise that you’ve been acting in a manner that detracts from you and then try to correct it and ‘prove’ otherwise – it’s like trying to glue a house back together that has rotting foundations.

The answer isn’t to try to ‘correct’ them – get out. The type of person who would have stuck around hoovering up the fringe benefits of you having little or no boundaries, isn’t interested in seeing you differently – they’d have to see themselves differently too.

The incentive to change is this: how you do things doesn’t work. It doesn’t.

I don’t know anyone who is happy treating themselves badly, and I certainly don’t know of anyone who is genuinely happy and personally secure in a relationship where they have shag all self-esteem and/or they’re being treated poorly.

Some of you only want change to happen in a one mile radius – you just want to make yourselves attractive to the type of person you’ve struggled to win over in the past. This is like saying you only want to make cosmetic changes not deeper, galvanising, life changes.

Who is going to achieve better results? The one that thinks they know better yet again and tries to come up with a ‘winning formula’ for snagging an unavailable person? Or the one that says “I’m not sure where I’m going to end up, but I know where the frick I’ve been, and not treating me with love, care, trust, and respect is no longer an option.”?

Only the incredibly arrogant or the very deluded, continue to throw themselves into oncoming traffic and expect not to get run down. Again. That’s stubbornness of the worst kind; you’re not budging in spite of compelling reasons to do so – experience. Relationship insanity is carrying the same baggage, beliefs and behaviours, choosing same types of people, different package, and expecting a different result.

Change doesn’t come from doing more of the same thing. If you persist in circumventing what you know to be healthy or right for you in terms of your values, it’s just disrespecting yourself by another name. When you keep finding new ways to not believe in yourself and to let your boundaries be busted, all roads lead to unhappy.

This is about making a choice because let’s not forget, that even when you choose not to choose, that’s a choice in itself. Even when you allow yourself to be a passenger in other people’s choices, that too is a choice. You have to choose between a rather painful comfort zone or making change, changes I might add that need to be real changes not faux changes that are just a degree out from your usual mode.

If you’ve done all sorts of things that you never imagined you’d do, have rolled yourself out like a doormat and tried to be ‘good enough’ for people, you can change because you have already been changing – it’s now time to move away from that and head in the direction of you.

Want to break your habit of unhealthy relationships? Check out my book and ebook Mr Unavailable and the Fallback Girl in my bookshop.

Challenging the misconceptions about yourself, love, & relationships
Reader Question: How do I stick to No Contact when we have kids?
They say you're a 'couple', so why doesn't it feel like that?