Um, *Why* Are You Telling Me This? [When Exes & ‘Friends’ Tell You Stuff You *Really* Don’t Need To Know] 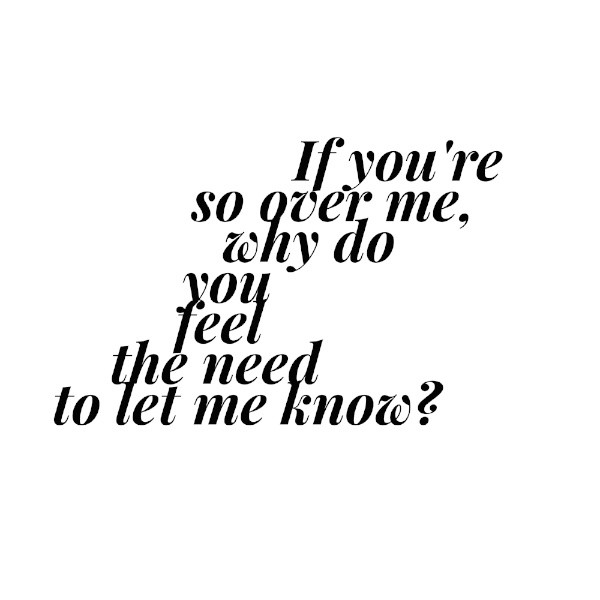 Have you ever received a call or message from someone that leaves you thinking, Why the hell would they tell me that? Are they deliberating trying to mess with my head or ensure that they plunge me back into a misery that they know that I’ve done my damnedest to move on from? Or, are they testing me out to see if I still want them?

I remember this feeling well when I’d moved away from home (Dublin, Ireland) and my ex would send me messages about how well he was doing (O-K…..) and the “young fillies” {side-eye} that apparently all wanted a piece of him when he was out clubbing (because that’s the type of thing your ex needs to know). I’d read his messages and re-enact the calls to my friend and we’d be falling around laughing. Who says this stuff? Behind my humour though, a part of me smarted from his insensitivity, not because I wanted him back but because I kept trying to make sense out of nonsense, wondering why somebody would behave in this way. Does he have so little regard and respect for me that he actually thinks I want to hear this guff?

I was reminded of these shenanigans when one reader told me how her friend called her up to let her know that the traumatic ex from a couple of years ago who she was finally over and who never put her on Facebook, was all loved up and splashing it all over Facebook. In what section of the unspoken handbook of friendship that most of us have a level of concept of, does it say, When your friend has finally started to move on from their shady ex, make sure that you let them know that they’re doing something with their latest partner that they didn’t do with him/her? The irony is that she would never have known about it because she’d unfriended him.

Another reader has a just-about-are-an-ex – this is when you know that it’s over but you’re still clinging on by a thread in that half-life where you’re hoping that they’ll come to their senses or are waiting for them to go, “Just messing with you! I have spontaneously combusted into the man/woman you wanted? Will you hop on to that there white horse and gallop off into the sunset with me?”

I digress… So this fella is not over his ex and in fact, has spent the entire year-long relationship blaming him only having his toe and maybe even a pube or few in the relationship as well as his flip-flappy, blowing hot and cold, passive aggressive shenanigans, on the fact that he’s not over an ex. She finally steps up and draws her [chalk] line and he says that he needs to sort himself out, she deserves better and yada yada yada. What’s he doing, this man who has not been able to get himself together during the relationship? Calling and sending texts about how he’s getting it together, life is going good etc.,…. yes because that’s what you want to tell the woman you just broke up with two weeks ago who wants to make a life with you.

I’ve heard stories about people receiving calls/messages about how their ex is in love for the first time, that they’re finally settling down and starting a family (even when they’ve left their ex literally holding a baby), that they’ve bought all manner of expensive stuff (while still owing whoever they’re telling money), how a new partner is better in bed (why a ‘friend’ needs to tell you that about an ex is beyond me) and the list goes on.

Have some of us lost our social compass? Is empathy in short supply? Where is the filter? Where is that delay button also known as ‘conscience’?

People who call or text under the guise of “keeping you in the loop” and “keeping in touch”, who are really testing the waters, or trying to re-insert themselves into your head so that they’re front and centre, or are angling for an ego stroke, trying to keep you on a string, or who are taking a level of comfort from your discomfort, don’t check themselves and ask:

1) Is what I’m saying helpful or harmful?
2) Am I only thinking about me or have I truly considered the other person’s position?

The ex or friend who appears to be going out of their way to disrupt you with their calls or texts has only truly thought about things from their perspective. One might put their need for gratification ahead of your feelings, the other has a “juicy piece of information” burning a hole in their pocket. It’s not uncommon for there to be an element of passive aggression – telling you something with a smile but masking resentment.

As a friend, we can be sensitive enough to know when it’s safe to say something (after all, if we feel it’s that pertinent to share something, we must know something of our friend’s journey) but there’s a way of saying things and it cannot be about gossiping or even on some level trying to put a monkey wrench in the works like, Ha! See! I knew you weren’t over him/her!

You could argue that it’s an “easy mistake” to be insensitive (not when you employ a little something called empathy on a regular basis) but that doesn’t explain why an ex makes these calls or a friend hurries to tell you something that it doesn’t take a rocket scientist to work out that it’s going to be at the least, insensitive and possibly disruptive.

It’s not that you have a blackout on all things ex, after all you cannot control the uncontrollable so there’s going to stuff that you can’t legislate for, but how much do you really need to know about what an ex is doing, especially when you’re not in touch and especially when it’s your friend who’s telling you? Have they forgotten what you went through? Did they see it as just something minor?

It’s one thing when a random or someone who we aren’t close to says something this insensitive but we don’t expect it from people we regard as friends and we often can’t help but hope that even though a relationship didn’t work out, that our ex respects or cares enough to think twice– if they didn’t think twice in the relationship and struggled with empathy, they’ll be just as bad if not worse when they’re out of it.

What you have to be careful of doing is getting drawn into it, either by finding value in being called or texted (and so feeling ‘relevant’ and ‘important’ as if they’re the determiner of your worth) or by taking the bait and giving them the reaction that they want (hopeful hints about the possibility of getting back together which they then take as confirmation that you’re still an option, or letting that ‘friend’ derail you).

Don’t forget who you are. Recognise what’s behind their behaviour (it’s not your worth) and don’t chase after and feed critical thoughts that may come up. Definitely don’t invalidate your feelings by pretending that you’re OK with what they’ve done.

And then set a boundary with you so that you’re not open again in the same way to being a receiver of this type of info from that person and if you feel that the situation calls for it, draw your line directly with them too.

If you struggle with asserting healthy boundaries or are very hard on you, check out my 30-day projects, Embrace Healthy Boundaries and Tune In To Your Inner Voice (& Calm Down Your Inner Critic).

Stop Obsessing over How Men Communicate
I'm Not Good Enough - The world through a low self-esteem lens
"I can't believe they've changed - What's wrong with me?"