Are You Insecure About Whether You’re Insecure In Your Relationships? 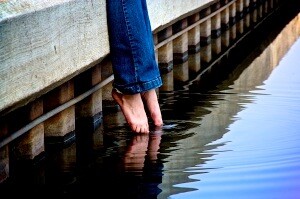 If you’re someone that regards yourself as feeling or being ‘insecure’ in general, which is having a lack of confidence plus the anxiety and uncertainty surrounding it, you’ll find it difficult to know where you and others begin and end. It then puts you in a bit of a quagmire when you experience problems or a breakup, causing you to ruminate on “Is it me or is it them?” It then becomes you being insecure about being insecure in your relationships, which will have you going round in circles.

I’ve felt insecure in all of my relationships, even in the early days with the boyf. The difference between this relationship and all of my previous, is that there was no external evidence to support my insecurity – my lack of confidence was about me and my beliefs, my uncertainty was about me in the context of the relationship and being afraid to believe I wasn’t going to drop the ball, and my anxiety was my own Dynasty level drama going on in my head.

This is something you have to remind yourself of – you can be insecure and be with someone who is behaving in ways that will actually make even the most confident of people struggle to have confidence in the relationship.

All too often I come across people who have a list of things that tick the unhealthy boxes that would rightfully remove anyone’s confidence from the relationship and yet when they want to find reasons to blame themselves and stall the process of letting go, they get it into their head that being insecure and being with someone that may be behaving like a jackass are mutually exclusive.

Whatever insecurities you have, they don’t turn an otherwise decent person with character and integrity into someone that at best takes advantage of you and at worst, abuses you.

I’m not saying that insecurity doesn’t affect relationships but if you put together a list of what has happened in your relationship and you have stuff that’s code amber and red territory, you being insecure is the least of your concerns.

If you meet someone who is actually behaving in ways that are conducive to a healthy relationship but you’re insecure anyway, you’ll still battle with the lack of self-confidence, the uncertainty and the anxiety and gradually, if you don’t get a handle on yourself, it will erode the relationship.

Your lack of confidence will be bolstered for a period of time by the other party’s confidence, and if it continues, the relationship will become imbalanced. If you won’t be secure in spite of external evidence to contradict your lack of confidence etc, you have to ask yourself why they should keep trying to ‘convince’ you? You might think it will show how much they love you if they’ll spend their time constantly reassuring and proving themselves and the relationship to you, but what are you bringing to the table? You’re not showing confidence in them and the relationship so who is reassuring and convincing them?

Many people are under the misguided impression that in the ‘right’ relationship your insecurities will ‘vanish’ just like these same people might believe that their commitment-resistance, addictions, persistent problems and hurt from a previous relationship/experience will disappear, as if ‘love’ fixes everything. Then when all of these things still exist, it actually only adds to the insecurity.

It’s not unnatural to be insecure about certain things but it is unhealthy to be generally insecure or to enter into relationships lacking a good level of personal security as it actually becomes an invitation for someone who reflects your insecurities.

Personal security means knowing who you are, having a reasonable level of self-esteem (boundaries, treating yourself with love, care, trust, and respect), and being a whole person instead of someone with a person shaped void to fill. You don’t inflate people’s value and carry on like they’re that special, and you’re not desperate.

In my last post I talked about when you can’t figure out what’s bothering you because you’ve normalised treading water in stress. By the same token, you need to be careful of treading water in insecurity. While some people get off on it and call it ‘passion’, ‘chemistry’, and ‘fireworks’ and ‘once in a lifetime love’, for most of us, insecurity will have a detrimental effect on our sense of self, particularly because if it remains unaddressed, it does become difficult to distinguish between your insecurity and Other People’s Behaviour.

Your first port of call when you do feel insecure is to ask yourself if your concerns are valid. This helps you to identify the source.

You are right to feel insecure when someone has promised to change umpteen times and then come back claiming that they’ve changed again. If you don’t genuinely feel, see and experience that change, your insecurity is telling you to stop flogging the chance donkey.

You’re right to feel insecure after you’ve been back and forth waiting for your married lover to ‘choose’ you and leave their partner. You’re even more right to feel insecure if they say that they’re getting divorced as a way to get back into your life and then shazam!, nothing. You then feel like you’re being distrusting by chasing them up and are afraid to say anything for fear that they’ll say “Right! Well you obviously don’t trust me, so I’ll just stay with them!” Someone who is leaving will leave. If they could change their mind over you rightfully querying what the frick is going on, they were never leaving anyway. If you tell me you’re getting divorced and then say nothing, I’m not being impatient asking you what the hell is going on – it is my right.

If you feel insecure due to previous experiences this is natural, but these are issues that you should resolve before you take them into a new relationship and expect a partner to iron out your problems and play armchair psychologist. I’m not saying you can’t have your wobbles but whether it’s that you’re tormenting yourself or throwing all your fear at your partner, you will suck the life out this relationship faster than a publicity stunt marriage.

Offloading all of your fears and lack of confidence into a relationship is toxic.

It’s not that you shouldn’t discuss concerns with your partner (of course you should) but if your insecurity is internally driven, you would serve you, them, and your relationship well, by doing some work to support yourself. Write an Unsent Letter either to yourself or them and write out all of your concerns. Just vent them and then identify recurrent themes and look at specific ways to address them.

If there are insecurities being triggered by specific things in the relationship, this gives you a starting point for discussion – this is better than lumping all of the insecurities in and then overwhelming and drowning out concerns specifically pertaining to your current relationship.

Anything that’s a recurrent theme throughout all (or most) of your relationships is for you to address – you’re the common denominator. Whether that means talking to a professional, keeping a Feelings Diary, going a little bit slower – make sure that you’re addressing the insecurity rather than just letting it it eat away at you and the relationship.

What I do know is that if it’s internal and you have no real external concerns, you’ve just got to exhale, put both feet in and let it be. Equally I know that if there are real external concerns, don’t invalidate how you feel, because whatever you feel, it’s real in that you feel it which means you must address it. When you’re honest with yourself, you can differentiate between a personal wobble and…a wobbly relationship.

Getting Stuck On Chemistry – That Intangible Thing You Swear You Have So Much Of
Waiting To Exhale
Without disappointment, boundaries aren’t possible