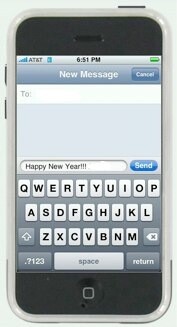 One of the most popular questions in my inbox at the moment is something along the lines of “My ex sent me a text saying Happy Holidays/Great result tonight/Did you see the snow?/Are you ignoring me still? (or some other feeble message) – what should I respond with?” Some of you are even thinking ahead and clocking up some serious energy consumption pondering what you should respond with if you get a Happy Holidays/Christmas/New Year message.

There is nothing in “Happy Holidays/Great result tonight/Did you see the snow?/Are you ignoring me still?” that says “I love you”, “I want to get back together with you”, “I’ve changed”, “I’m sorry” or even “I’m making a great deal of effort to show you how much I care.”

If you attach any of these meanings and:

2) Respond back by pouring out your feelings

3) Invite them around for a shag

4) Cancel your plans or put everything on hold

5) Go into a tailspin and begin ruminating about what it all means, the Coulda, Woulda, Shoulda and yada yada yada

8. Turn up at their home/office/place where they hang

9) Tell them all about themselves, or

you’ve had a seriously disproportionate response.

You are experiencing high intensity emotions/rumination or engaging in high level action for low level contact and effort.

Do you know what you respond with when your ex sends a text saying Happy Christmas/Holidays/New Years?

You either say nothing (it may well be a bulk message anyway), or say nothing because you’re No Contact, or say ‘Thanks and same to you’ or respond with “Happy Christmas/Holidays/New Years”. That’s it! Next! Move on and go about your business. Anything else is OTT.

Likewise, if you’re the sender, you shouldn’t be expecting much either. You might think December offers up the perfect opportunity to reach out to your ex (read: attention seek but you may pitch it to yourself as being the bigger person or a ‘good’ person), but if a text is the best you can manage, it only goes to show that you’re trying to be risk averse and generate an ‘ideal’ maximum response out of a low effort.

I mean, how great would it be (not!), if all we had to do to get a shag, ego stroke, shoulder to lean on, or even have someone declaring our love for us, was to send some text messages?

This all goes back to why you must focus on building mutual relationships – when you match someone with their low effort and see their low effort for what it is, you don’t see gold where’s there’s copper – you see their lack of effort and the reflected results in your life and distance yourself, flush them, or know the limits of your interaction with them.

If you’re making a big deal out of texts, you’ve become acclimatised to a diet of crumbs – it’s time to expect more for and from yourself.

It’s not that text messages aren’t useful (I reminded the boyf to pick up milk earlier) and that in context of a relationship where there’s healthy human contact, calls, and a consistent, progressing, balanced, committed, intimate relationship with shared values and love, care, trust, and respect, you don’t need to be concerned about the use of them, but some of you are making a very large deal out of what can only be called rat dropping communication.

You only have to make a big deal out of text messages when you haven’t got much else to go on… I’ve seen it time and again – the only people who champion text messaging as some great means of communication are those who have an inflated sense of their own importance and believe they’re busier than a world leader, and those who’ve managed down their expectations into crumbs.

I’d also like to point out that the only men who have attempted to ‘sex text’ with me, have all been attached. ‘separated’, or numpties…

I hear from people who live off a couple of calls a month and live off texts the remainder of the time, who are twitchy and waiting around for their phone to vibrate with a text, who only ‘communicate’ when it’s date/shag/lend us some money time, and who are making a mountain out of an ant hill.

You might even think that texts you send are representative of a great effort – they’re just texts.

If your idea of breaking contact and reaching out and saying something meaningful is to send a text, you’re engaging in low level (low risk and low effort) contact but trying to pass it off as high effort.

Texts are rarely a great effort unless they’re in the context of an already effort filled relationship. It’s great to get a thoughtful text from someone who is already thoughtful, that you have a great relationship with and communicate via other means. It’s not really very thoughtful if the length and breadth of their efforts (or yours) is to send an attention seeking and/or ego fishing text.

Would you find it acceptable to be broken up with by text? If not, you have to ask why you would you feel it was acceptable to conduct your relationship by text?

If you had to say it to their face or pick up the phone and follow up with action, would you still say the same thing?

Texts give too much room for the imagination. You end up imagining how they may be saying things based on how you’re saying things and there’s tumbleweeds where there should be tone – I know I read text messages in how I’d like to imagine they sound, which can be wide of the mark if you allow your ego, libido, or your imagination to get in the way. At least on the phone you can hear hesitation, change in tone, and face to face you can pick up on body language. Of course, for many of you reliant on text messages, the sad reality is that if you stopped texting, there wouldn’t be much or anything going on.

But remember, it’s just a text. If you’re looking to forge a relationship, it’s important to recognise that you cannot be available for a relationship, never mind a healthy one, if you’re on fantasy text island in an unavailable one.

It’s just a text – you’re better than making a big deal out of crumbs. Or rat droppings.

Forget this hinting malarkey. I'm going all the way.
When They Come Back Claiming That They've Changed...But Have They?
Passive Aggression in Relationships Part 2