What Does a Person Really Have To Do If We’re Willing To Excuse & Explain Away Everything? 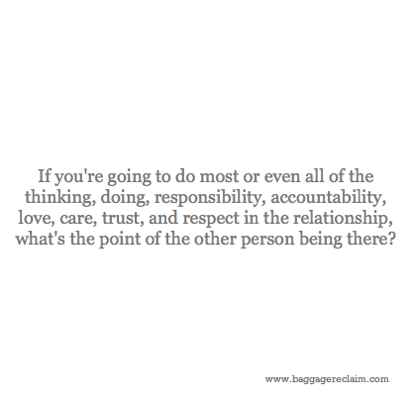 Recently while talking with friends, I was struck by how much time is spent explaining away and hypothesising on another person’s behaviour. Literally an hour had gone by and a serious amount of excuses and debating had been going on.

“He’s a really shy guy” said one friend as a justification for a nine month absence after their fling, which he’s just ended that silence by getting in touch… via Facebook.

“He’s just out of a relationship and wants to take it slow” another friend explained. “When did it end?” I asked. “Six months ago” and this whole “taking it slow” malarkey was coming after he’d been the driver of speeding things along, so now she looks like she’s pressuring him for a relationship, when really, she isn’t.

“I know this might sound weird, but she basically doesn’t need me crowding her right now”. What, by calling? By expecting her to follow through on things that she’s instigated?

It’s difficult not to feel cautious about a fledging relationship when so much airtime is already being devoted to finding justifiable reasons for what a person isn’t doing when there could be talk about what they are doing.

It occurred to me while thinking about these excuses and also reading the many comments and emails here at BR that, a person doesn’t really have to do or be very much in a relationship if you’re willing to do most or even all of the emotional and physical legwork.

Before things really have a chance to unfold and without each person owning their own, you’re willing to basically account for them. You’re using up your mental resources thinking about what’s behind their actions. What about what you think, need, want, and expect? How are you supposed get a gauge on how you feel when you’re so busy getting a Ph.D in them?

I see people waiting months or even years for someone to come through, to deliver the commitment goods or to even leave their current relationship. To make the waiting time ‘easier’, they come up with every damn excuse under the sun but don’t truly absorb the real reason as to why things aren’t proceeding. It becomes easier to make another excuse and basically say, “Let me give you another chance to deliver because if I face the reasons why you haven’t, it’s just too bloody painful”.

If you’re willing to make excuses, to make excuses for their excuses, to fantasise even before reality has had a chance to set in, to see potential even when their current and continuing actions and words contradict it, and to believe in their promises or alluded to plans even when they don’t materialise and you end up being disappointed, what does this person really have to do?

If you’ve got an advance answer for everything, when actually they’re already showing or even telling you the answer for these very things, does reality matter? If you tend to default to blaming you, does the real reason matter?

I said the same thing to my friend that I’ve said to many readers: Why would you blame you for the fact that someone failed to deliver on something that they suggested without prompting from you? Why would you think that it’s a reflection on you and that the offer was genuine but that you effed up and now it’s been withdrawn and put on hold?

When we make excuses for people and are willing to expend chunks of our lives filling in the gaps between someone’s thinking and actions, we’re making things very easy for them while making things very hard for ourselves. It’s burdensome, it’s tiring, and it’s unnecessary. Why make things so easy for them? Because you love them? Excuses haven’t done much for you lately other than keep you knee deep in something that ends up detracting from your self-esteem.

Excuses create very imbalanced relationships because by making excuses for the other party so that you can ‘keep you in play’, you are assigning a greater value to them in the process, as if to suggest that they don’t need to step up. Er, yeah they do. You are important too. You are a person of value. They’re just not that special that you should basically step up as their unpaid interpreter and translator. If this relationship is ever going to go anywhere, you both need to step up.

The reason why so many people latch onto excuses is because the unvarnished truth is harder to digest when there aren’t some excuses buffering it. But making excuses for people opens you up to hurt, it detaches you from reality, and may even prove to be a distraction from ensuring that you’re with people and in situations that reflect your own values.

It’s not about seeing the worst in people or even trying to see “the best”; it’s about seeing reality and often that means not letting your imagination run wild crunching a gazillion reasons as to why something has happened. Keep your feet firmly in reality, watch, listen, pay attention to your own feelings and observe. Don’t judge you and don’t make excuses for them – let the truth, whatever it is, stand by itself without you cloaking it in excuses and act accordingly.

Chasing Crumbs & Perfection: In Pursuit of The Fantasy
Mr Unavailables and Assclowns: Shedding Crocodile Tears Part Two
If they lie to themselves, why are they going to be honest with us?