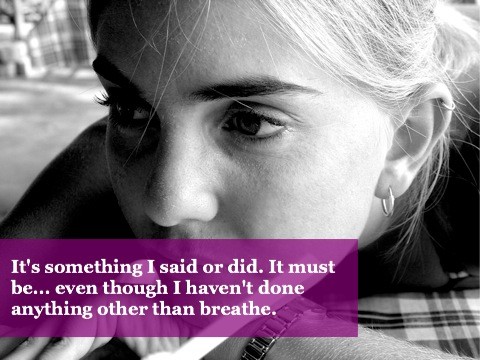 Sometimes when we’re around somebody who appears to have a lot on their mind or who we think is behaving differently, we can make the mistake of assuming that it’s got something to do with us. Even if we haven’t done a damn thing, suddenly we’re imagining scenarios where we’ve committed some sort of offence. While I get a hell of a lot of emails about relationships, I also get a fair amount about struggles with conflict and criticism in the workplace and with friends.

When you’re inclined to have an overactive ‘blame thyroid’ and struggle with the likes of rejection, conflict, criticism and disappointment, having a default concern that you’ve erred in some way can leave you feeling very wounded… and that’s before you’ve even clarified the situation and discovered the facts. This means that you may be feeling wounded and reliving old pain and you may not have actually ‘done’ anything to warrant your rumination and possible torment.

Recently I witnessed a misunderstanding like this unfolding between two work colleagues and it was a stark reminder of one of my personal guidelines: not everything is about you (or me).

Person A had received some bad news that must have affected her attitude at work. Person B without asking anything, jumped to the conclusion that Person A had an issue with her, which in turn affected her attitude. When I walked in, they were both hugging and Person B was crying, apologising and expressing deep embarrassment now that she’d realising that Person A is going through a very painful personal crisis. A few minutes passed and Person B awkwardly attempted to explain why she’d behaved as she had, which only made things worse and Person A said, “What you said was extremely insensitive and made what is already a very difficult situation even worse.” She also added, “Instead of making those comments, it would be better if you just ask”.

I know I’m not alone in having one of those moments where someone says that they need to talk you about something and then you go into worry mode trying to work out what you’ve done wrong…even though you know that you haven’t. Of course even in knowing this, you then try to think of something that might have been misinterpreted. Then you speak to this person and they’re telling you a personal problem or a secret, or they’re inviting you somewhere or asking you something. Then you feel a bit silly for being anxious.

Now while having a little ponder about what you’ve ‘done wrong’ is one thing, taking it to Dynasty levels of drama by imagining all sorts of conflict and your argument response, feeling wounded, reliving old pain and translating all of this into passive aggressive and/or aggressive behaviour, as well as forming a negative opinion of them and even conveying it to the person in question, is what takes this not only into misunderstanding territory, but is also the type of thing that’s likely to cause offence when it’s out in the open and it’s going to end up not only giving them the impression that you don’t think too highly of them, but they’re probably going to be a bit wary of you. Which is understandable really.

When something like this happens, it becomes less about what’s actually going on and more about your own internal drama and actually, your opinion about you and how it’s being projected onto others.

Add in that they may turn around and say, “Actually I’m ill / a family member is ill / someone has died / I’m getting divorced / I was robbed / I’m feeling depressed” and umpteen other possibilities and they may go from having one issue to deal with… to two, plus they may even feel compelled to disclose something very personal just so that they can reassure you that it’s not you, plus they may even have to put aside their issues to pacify you and it becomes super-awkward.

Work in particular, is one of those places where people have to force themselves to go even when they’re in emotional turmoil. The likelihood is that you really have no idea what’s going on in the lives of some of the people you work with, even if you’re spending what feels like most of your life with them. Work can also be used as a means of escaping other aspects of our life including our feelings and we can be inclined to think that we’re behaving normally, when our attitude and demeanour are actually being affected. And yeah it would be nice if people gave you a heads up when they have issues in their lives but it’s probably easier if you don’t put yourself in the centre of everything.

It’s so easy to assume that if someone is in a bad mood or isn’t being themselves that it ‘must’ be something to do with you, but really, it’s not. People have their own lives, thoughts, worries, beliefs, motivations, agendas etc.

If you can think of at least one other possibility (believe me you can if you move away from default blame mode), why charge in on false information and work up a negative diagnosis when you could just ask, “Is everything OK?” Isn’t this a way of expressing concern and finding out what’s going on?

Even with one other reason in existence, the odds are the same for guessing the sex of a baby. Yeah you could be right, but equally you could be wrong. Would you buy everything for the sex you’ve decided that it is, decorate the nursery, choose the name, and make the announcement without clarification?

Stop, look, listen, observe. Ask if something is wrong. Calm down and have enough curiosity to consider other possibilities. If you ask and they say it’s not you, accept that it’s the the truth and move on. Whatever you do, be very careful of making a detailed accusation and dragging in all sorts of things because you cannot take it back after they go, “Er, actually I’m __________ and I don’t know what you’re talking about.” Also don’t bite your tongue and then show your annoyance by being passive aggressive. The awkward thing is that if they call you on it, you might deny it or say that it’s because they’ve done whatever you assumed and then when they say it isn’t true, you’re only going to be more defensive.

Believe me, as someone who since I was a child used to assume that if something went wrong or someone was upset that I must have something to do with it, I know the path of self-blame and internal drama all too well. It’s important to talk rationally to you to change that default setting of assuming that it’s you and then running with it. I still get that feeling sometimes like “Oh-oh…” as if someone is mad at me for forgetting to do chores or homework then a voice chimes in and reminds me that I’m a grownup now!

I’ve found that by taking the attitude of, If they have an issue they’ll raise it, and that if I’ve got an issue or I think that I actually have done something that I’ll raise it, it’s saved me a lot of drama because it keeps me in reality instead of stressing out unnecessarily.

Honesty's Got To Cut Both Ways
When You Experience Problems Upgrading Your Commitment
Revisited: The Truth About Intentions