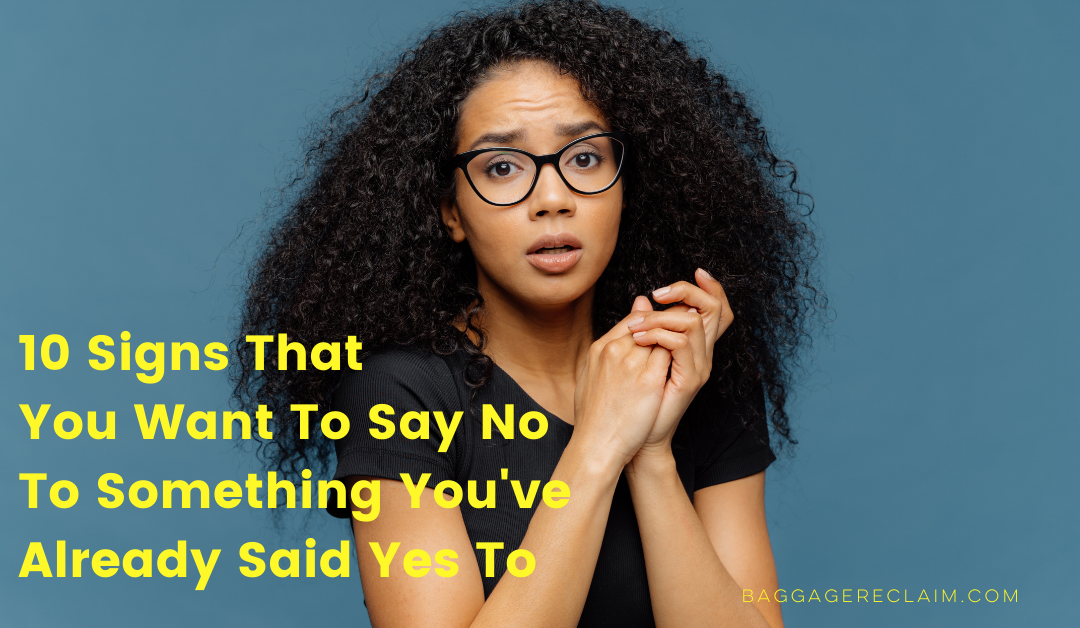 1. You spend the time between when you said yes and the date of an ask or event trying to come up with ways to get out of it.

After telling people what you think they want to hear to make them feel good, the hunt for an out or excuse is on. There might be this impending sense of doom as the date looms. And the truth is, you know that you don’t tend to want to do what you agree to! You figure it’s better to disappoint people later rather than upfront.

2. After you say yes, you’re like Shit, shit, shit! What have I just agreed to?

Anxiety, panic and overwhelm waste no time creeping in and you might not realise that your body is screaming that you need and want to say no.

3. You say yes, and then you drop hints about not wanting to do it.

Maybe you mention the crazy amount of things you have to do, how tired you are, tell stories about other people who’ve struggled with the ask, or you’re giving off a vibe of being fatigued, pissed off, not into it. Whatever it is you’re doing, on some level you want the other party to relieve you of the ask. But without you saying that you can’t or don’t want to do it. Hell, you might be trying to make them feel guilty for asking in the first place. You’re hinting. Of course, if they ask if you’re OK, whether you can or still want to do it, you say yes.

4. After saying yes, or possibly as you’re saying it, you’re fuming inside.

I can’t believe they have the audacity to ask me! Here we go again! Muggins is expected to pick up the slack. Don’t they realise how much I already have to do or what I have going on? I bet they wouldn’t ask X to do this.

5. You said yes because of how you thought you would be perceived if you said no.

There’s a fear that people won’t like you, that it will look funny if you say no, that you ‘should’ want to say yes because of who’s doing the asking or to stop people talking negatively about you.

6. You felt guilty, not because you were doing something wrong but because of your fear of hurting their feelings or letting them down.

So you gave them a guilt-laden yes and now you feel crappy, anxious and resentful.

Your inner critic’s having a field day, shame’s taking hold, and you’re not taking care of you. In fact, you might be punishing yourself for saying yes.

8. You feel as if you need a shower after saying yes, it was that dirty.

There’s an awareness of having said and done something that doesn’t reflect your values.

9. You said yes automatically, with little thought, and now you’re going ahead because you don’t think you can back out.

As you say yes reflexively instead of mindfully and with consideration of the ask and your boundaries, bandwidth and wellbeing, you push ahead. You acknowledge to a degree that you don’t need or want to do it but rationalise that you’re obliged to continue. There’s this sense of not having a choice. You might argue to yourself that you don’t want to be flaky and break commitments.

10. You’re damn near praying for an illness or catastrophe to come along so that you’re spared from having to do the thing.

You wonder if you would still have to do it if it was obvious that you’re unwell or a meteor struck the planet. You might feel disappointed when you wake up and discover that you haven’t lost your voice or that you don’t have a high temperature!

These are all signs that intentionally or not, you’ve said yes for the wrong reasons. Don’t ignore these warning messages from your body and your responses. Work out what you need to do. It’s OK to say no, and that includes after saying yes. Or, at least, make sure you know for next time.

Advice Wednesday: I Realised I Never Asked For What I Needed In My 5-Year Relationship & Want To Go ...
Lovenomics: Managing Your Desire to Be the Exception in Relationships Part Two
Why Me and Not Them?