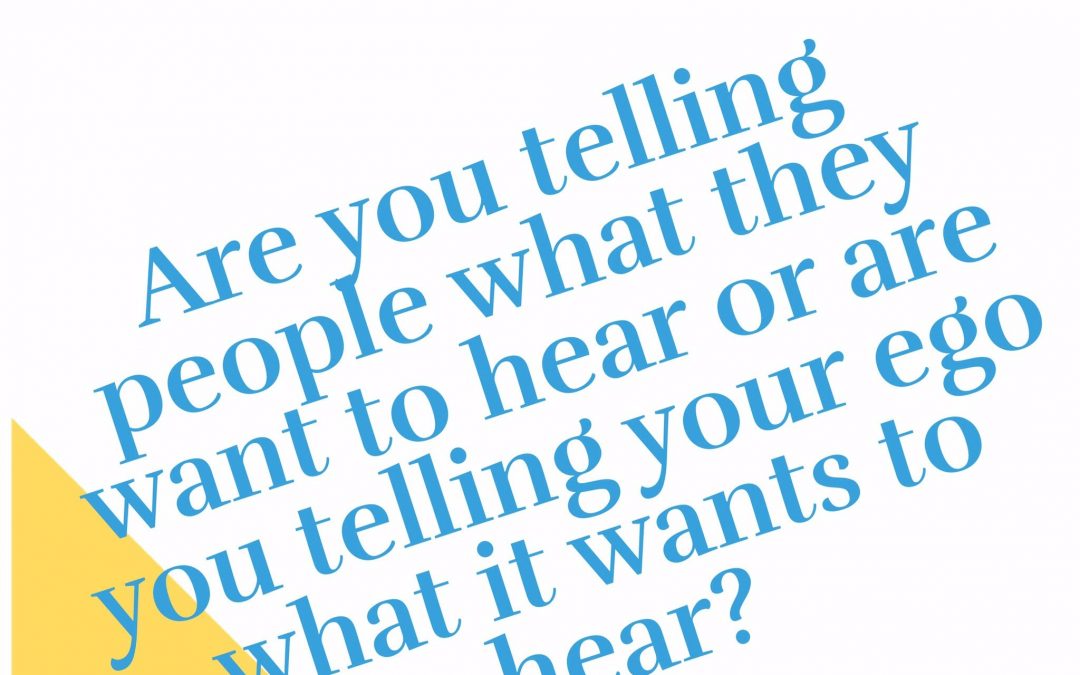 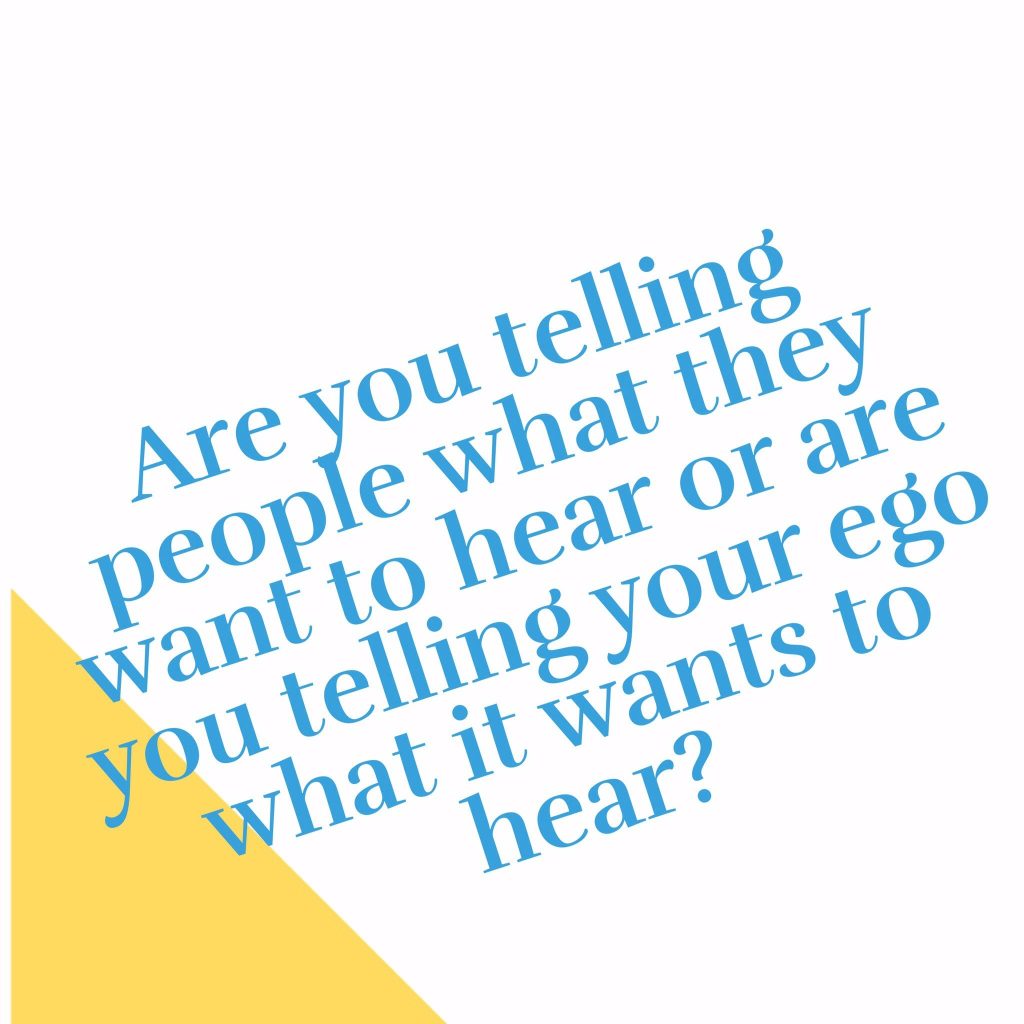 When we’re passive and yes, sometimes passive aggressive, we get into the rather tricky habit of telling people what they want to hear or more aptly, what we think they want to hear. We project our fears and beliefs about conflict, criticism, and also what we perceive as being ‘loving’, and we duck out of being honest, which is expressing the truth with respect. We are socially conditioned to think twice about being straight with people. Our younger selves were innocent and spoke our minds, and gradually through various experiences, we picked up messaging about the ‘truth’ that means that when we’re in situations that activate our pleaser tendencies and our guilt inclinations, we fear being upfront.

We have to start realising that when we’re letting people down, confusing and hurting them, we are not telling them what they want to hear; we are telling them whatever will limit our consequences and we’re also trying to influence that person’s perception of us. It’s a lot more ego focused than most of us will admit to.

Telling people what they want to hear is akin to believing that people want to be bullshitted. Granted, there are some people that prefer to live in LaLa Land and there are also people who think that bullshit is better in the short-term without regard for the bigger picture, but many of us have been around the block a few times to know that the ‘pain’ of the truth is much less than the pain of lies, deception, and having our egos pandered to.

Depending on what we associate with honesty, criticism, conflict, and rejection, when we are in the habit of telling people what they want to hear, which is really about what we want to hear, much of our reasoning is based on wanting to control other people’s feelings and behaviour. We reason that ‘honesty’ will make people angry, sad, or afraid and that what we’re doing is for their own protection but if we’re entirely honest, what we effectively ‘say and delay’, is about protecting us too.

Passive aggressive people say one thing and do another, masking their resentment and anger with seeming compliance. Each time they consider being more direct, more upfront, more honest, that inner rebel that’s acting out reminds them of previous experiences of being ‘honest’. When they tell people what they want to hear and then undermine it with conflicting actions, lo and behold, it causes a great deal of hurt, frustration, and yes, upset. When we’re on the receiving end of this and eventually call a halt to the passive aggressive proceedings and even call them out on their behaviour, not only will feel they feel defensive and aggrieved but they will also feel resentful towards us and think, Ha! See, this is why I wasn’t honest in the first place and told him/her what they wanted to hear. Look at how they’ve reacted? They forget that the reactions are not about their belated honesty but about being jacked around.

When we base who we are on what we think might be running through the minds of others or how we think they will react, we are anything but ourselves. Each time we do this, we’re deciding that if we don’t think that people will do as we want, then we don’t have to bother being ourselves or honest. Who we are is down to our values not the whims of others. We end up hurting and silencing ourselves.

When we tell people what we think they want to hear, we set all parties involved up for disappointment plus we create unnecessary work. We blame our perception of what we think people want as the reason for not doing right whether it’s by others or by ourselves. Is the fact that a person may not respond as we might like, a reasonable justification for ducking out of the responsibility we have to be us? Is it truly better to bullshit now and backtrack or speak up later? In some instances, where  we feel under genuine threat, then it can be protective to a degree but then we also have to recognise that if the price of being with someone is our silence, that we’re endangering ourselves in a toxic relationship.

One thing that’s particularly infuriating is when we give people whose actions and words don’t match an opportunity to clarify and basically speak up, and then they do the whole telling us what we want to hear all over again and then gradually start blowing lukewarm and cold with their backtracking. Just be honest!, we think, but in the end, when what a person says doesn’t stack up, we have to take them at the evidence of their actions and the very presence of the inconsistency. Words are not enough.

All of us are guilty at times of telling people what they want to hear but when it’s our default habit, we’re defaulting to being inauthentic plus sometimes we tell people what we think they want to hear because we hope that they will reciprocate and then feel very aggrieved when they are honest and we aren’t spared from conflict or criticism. Resentment builds from these assumed IOUs that we’re creating.

The pleaser in me had many years of training but since I stopped, for instance, treating everyone like my parents (incl. my parents), I now tend to take the gnawing sensation in my gut as a sign to step up. Most times that I tell people what they want to hear, it has blowback and I hate feeling like a child so I try to reduce the incidences and learn from it when I do. I used to be terrified of my mother and gradually biting the bullet has slayed that dragon in my mind and put some much needed boundaries in our relationship.

While some people seem to have little shame about disappointing others, most of don’t like to be what we perceive to be the bearer of ‘bad news’. We don’t like to disappoint even if the right thing is to say no instead of saying yes now and having to backtrack later, no doubt with some big ‘ole waffly excuse and explanation. Doing it occasionally is one thing, doing it habitually will only lead to ill feeling. Telling people what they want to hear and either not living up to this or simmering with resentment about your pushed down feelings and opinions, is the real ‘bad news’ because it damages your credibility and your relationships.

The next time you’re tempted to tell somebody what you think they want to hear, ask yourself: Who am I protecting here – me or them? If it’s really about avoiding conflict or criticism, or about trying to influence their feelings and behaviour by appearing compliant and pleasing, reexamine your motivations and weigh up whether short-term avoidance is worth eroding your sense of self or a relationship for. Remember, if you’re not being honest, you’re not being you.

Why Do Some of Us Find Birthdays & Big Occasions So Difficult?
Getting past disappointment: let go of the 'fixed ideas' that hurt you
10 Signs That You Want To Say No To Something You've Already Said Yes To