Can You Take a Hint? Why Hints Are Clues To What’s Really Up With Your Relationship 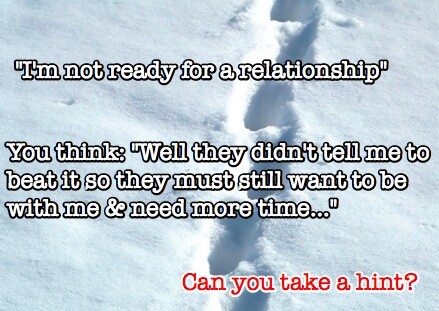 Every day, people who are dating or in relationships where there’s unavailability or other issues, come up against hinting, you know indirectly or slightly indicating something. In essence, we receive feedback and signals from the actions and words of our partners that let’s us know what’s up…if we’re listening and watching.

You always know you’re up against hinting when:

– You make a lot of assumptions that you don’t sanity check and adjust accordingly.

– You deny, rationalise, and minimise which then means that hints become a blank canvas for your overactive imagination.

– Certain things have been said that you don’t like or want to believe, which you then spend copious amounts of time and energy analysing and ruminating over.

– You’ve decided that until they spell it out, loud and clear and even get a whole heap of nasty on you, that not only are you still in with a chance, but that you don’t fully believe what they’ve been ‘hinting’ at because they haven’t said it.

Hinting is a clue. Actions and words (or the lack of them) give a clue, as do certain situations. Where there’s one clue there are other clues, but the truth is, often just one clue alone is giving you vital information.

We used to love the British game show Catchphrase. Contestants were presented with a hidden image of a catchphrase and the computer would remove jigsaw like pieces one at a time, and they’d have to try and guess what the image said. The less pieces revealed, the more money you won. We’d be killing ourselves laughing when the host Roy Walker would get distinctly impatient when practically the whole image was there and they were still struggling. “Say what you see, say what you see!” he’d say tersely in his Northern Irish accent.

Well hinting in dating and relationships is very much like Catchphrase – the more clues you have to collect before you take the hint, the less of a relationship you have and the deeper you are into an unhealthy situation, either because they’re at best taking advantage of and at worst abusing you, or because by refusing to take the hints, you’ve ended up acting without self-love, care, trust, and respect towards yourself.

It’s your job as the person in charge of navigating your own life and setting and knowing your own boundaries, to be listening, watching, and acting upon those clues.

The most popular argument that people who won’t take the hint make, is that they believe that if someone for example wants to communicate “I don’t want a relationship” or “I’m not ready” or “I’m not interested” or “I’m not leaving my partner” or “I only want you for a shag, an ego stroke, or a shoulder to lean on”, that they should say this directly. Stop bullshitting yourself.

Putting it all on someone else to spell it out, is major avoidance of responsibility and accountability. You’re also saying that you don’t trust yourself to take the hint. When you’re dealing with someone who is either conflict avoidant and/or afraid of endangering a shag/ego stroke/shoulder to lean on/money/ or even a job, they’re going to hint.

Expecting a direct statement is like saying “I know they’ve not been calling, failing to show up, pissing me around, telling lies, and all sorts of Future Faking, but what if I have it wrong? Yeah I’ll just wait for them to tell me that they don’t want to be with me or that they’re not going to commit.”

What the frickin what now? They’re already showing you and possibly even telling you in their own airy, fairy rinky dink way that they don’t want to be with you and that they’re not going to commit!

When someone only calls you when they want to hook up, it’s a clue that they only contact you to pave the way for a shag.

When someone doesn’t show up, unless they’re in a coma, it shows disrespect and disinterest.

When someone disappears, it is a clue that they’re a coward. If they try to come back and press the Reset Button, it’s a sign they’re manipulative coward.

When someone is married/attached and is trying to shag you or you’re already in an affair with them, it’s a clue that not only are they avoiding commitment, but that when they experience problems, whether it’s within themselves or their relationship, that they avoid them.

When they’re always drunk whenever you’re together or they’ve admitted that they have an addiction of some sort, or are clearly negatively impacted by their reliance on something, it’s a clue to get the hell out of dodge and that this person solves internal issues with external solutions.

When they’re telling you lies, it’s a clue that they’re dishonest.

When they’ve recently broken up with their ex, it’s a clue that they’re likely not over their ex which means you should be alert for subsequent clues.

When your partner hints that they’re gay or you even see them hitting on someone of the same sex or know that they’ve actually been sleeping with them, it’s a clue that you need to bounce unless you’re OK with this type of relationship. It shouldn’t take you having to find them literally having sex for you to take the hint!

When someone Future Fakes you and the future arrives without them making good on all of their grand talk, it’s a sign that this person is full of hot air. Instead of wondering what you did to scare away plans that were never going to happen, you should be taking the clue that that this person is all shirt no trousers.

When they’re being nasty, controlling, manipulative, abusive etc, it’s a clue that you’re in danger and need to exit, fast. You shouldn’t be waiting for them to put you in serious danger before you take them seriously.

When they act like a jackass to try to get you to finish it, it’s a clue that they want to end it, they just want you to do the dirty work. Either way, you have a relationship on your hands that needs to end.

When someone keeps breaking the relationship, it’s a clue that they don’t value you and that they also feel free to leave and return. Stop waiting for them to be nasty and say it’s definitively over – you end it!

“I can’t give you what you want”

“I don’t have time for a relationship.”

“You know my situation.”

“I just want to keep it casual” and other such guff, it’s a clue that they’re unavailable for an available relationship and have commitment issues.

It’s important that you listen, watch, and process the clues in your relationship because what hinters do is give you what they feel is a heads up about who they really are. It may be what you perceive to be a ‘weak’ hint, but it’s a hint and lo and behold, when you get medieval on them about messing you around, they’ll remind you that they said “I’m not in a good place right now” or that surely with all of their dodgy behaviour, you should have ‘known’ that they weren’t committing or even decent kind.

Listen to the feedback from your relationship and take the hint so that you stop selling yourself short. Trust the hint, trust your judgement.

Revisited: Are you worried about being 'good enough' for something you don't want or are not even do...
About that time when I found out that a friend is dating an ex from Mr Unavailable and the Fallback ...
Getting Your Wake Up Call: Relationship Epiphanies