Do we really need to explain why someone’s actions bothered us? Yes, sometimes….even if it’s just to ourselves 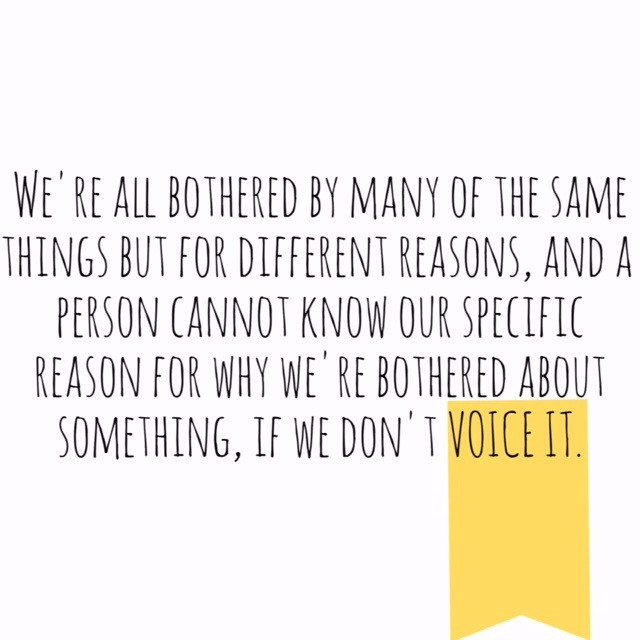 When you’re confronted with a potential situation where you will need to express your concern or upset about something that’s been said or done, you can feel caught between a rock and a hard place. The fact that you’re both adults may cause you to question whether you need to explain but on the flip side, the other party may have the attitude that unless you state it, that there isn’t an issue, which of course will mean that their actions towards you will not reflect your perceptions of things.

Surely they should know…., thinks many a baffled person who feels slighted or even wounded by the actions of someone who appears to be unphased.

How can they not realise that I’m 1) pissed off and 2) why that is? If it were me, I’d know, and I’d be apologising or at the very least not carrying on as if nothing happened.

The truth of the matter is, that while some people really don’t give a eff about what they do and who they hurt, more often than not, lack of awareness about how our actions have impacted another, stems from genuinely not realising that we’ve done something, or not registering the impact level. Some people get a bit confused on the whole empathy front because they feel that it wouldn’t bother them if someone said or did that certain something.

“I just wouldn’t see that as a big deal”, a guy explained to me recently. The trouble is that the person who they hurt, did, and the fact that he was unwilling to empathise with their position meant that it turned into something much bigger than it would have done if he’d just acknowledged where she was coming from.

There can be a reluctance on our part to be vulnerable and explain what’s bothering us and often, because it’s hogging up our emotional and mental resources, it’s near unfathomable that the other person couldn’t know. This is how so many people end up storing up anger and resentment; they decide not to broach something because ‘Surely they should know if they’re an adult or they care about / love me’, and then of course when they don’t appear to know about it or they don’t seem suitably bothered enough, they take this very personally and feel short-changed, particularly if they’re already a people pleaser and have been compromising themselves in some way.

When something is an open and shut case of assholery, it’s a lot easier to take the ‘I don’t need to explain’ stance. Particularly when the person has form for this kind of thing and has actually previously crossed and even busted up our boundaries, why this has occurred is self-evident. Of course we can explain our position but it’s likely to come from a place of telling this person all about themselves and/or hoping that what we say will influence them to amend their feelings and behaviour.

We may be explaining because we are someone who uses talking and thinking too much, to mask inaction. In these situations, we may be opting to keep explaining rather than addressing the reason why we don’t want to accept the truth of someone’s behaviour or the situation.

When we express concern and raise an issue, what we have to be careful of is hoping that we will be able to influence that person to change so that we can feel better about the fact that we’re engaging with them and have even let stuff slide by in the past.

For most other situations however, especially if what happened is getting merged in with the past or we want to be able to potentially move on from the incident with this person (if it’s not a shady interaction), or they are continuing to do things that compound the original offence, speaking up is key because remaining silent, even with ourselves, and suppressing our truth and the facts, isn’t good for our sense of self. It deeply wounds us and lack of even explanation to the self keeps unhealthy beliefs in play.

We’re all bothered by many of the same things but for different reasons, and a person cannot know our specific reason or our perception of the facts if we don’t voice it.

If you’re bothered by something but aren’t going to raise the issue with the person in question, make sure you raise the issue with you so that you get to a balanced perspective on it (no blaming and shaming you), acknowledge your feelings, and take any appropriate actions that are needed.

You can’t always raise an issue at the time but that doesn’t stop you from learning from the insights that you stand to gain by doing a little reflection on it, plus you quite simply know for next time.

Of course sometimes when you do take the time to raise an issue with someone, you may be met with the whole, “Well, I didn’t know it was an issue until now” and even, “You should have said”, as if there was some sort of expiration date on the option to broach the subject of what they’d done. The potential issue of my actions will self-destruct in thirty minutes. Failure to raise the issue within that time will result in pressing the reset button or denial of responsibility.

Then you say, “I am saying so, now” and they still want to talk about what you ‘should’ have done or analyse the feelings you’re mentioning. The thing is, it’s all very well that they’re pulling you up on not raising an issue at breakneck speed or your response, but the actual issue is what they said or did.

This is where it’s key to ensure that you broach the subject with facts – what happened, what was was said and done. People will argue against or analyse your feelings – “too sensitive” or even “dramatic” – but explaining the facts is difficult to wiggle out of. It becomes about statement as opposed to judgement of you or them. Sometimes we skip over the facts and go to feelings, but feelings aren’t facts and on their own without the facts of the events, what we say about our feelings can also give the impression that we’ve reached a conclusion and aren’t open to an explanation on their end.

Broach with facts and they can hopefully clarify their intent plus you are being assertive – representing you, not to force people to be and do as you want, but to make sure your needs, expectations, feelings, and opinions, are out there too. You matter.

Podcast 185: The Emperor DOESN'T Have Any Clothes On - Let's Talk About Gaslighting
Figure Out How You Feel & What You’re Experiencing With a Feelings Diary
Saying No is Not Wrong