Change Has To Be About Becoming More of Who You Are 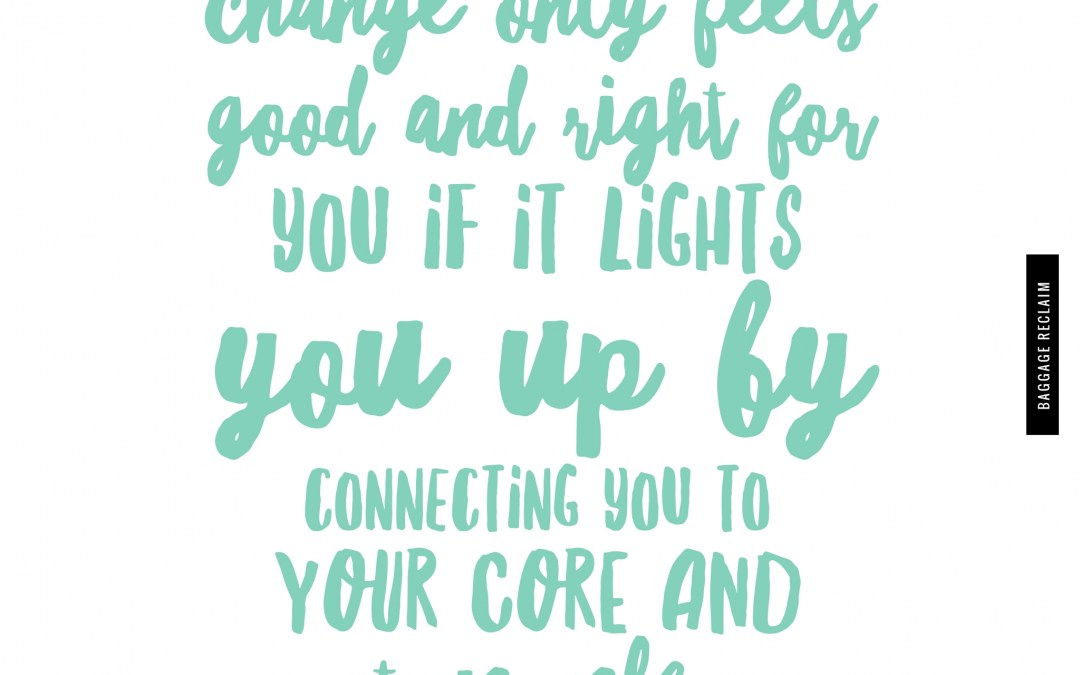 When we’ve spent our whole life (or much of it), doubting our worth and how ‘enough’ we are, the prospect of change, even when it’s something that we recognise as being beneficial and even critical, can seem like yet another thing that highlights what’s wrong with us.

It’s not unusual to have a negative association with change, possibly because we had significant or even traumatic life events that have made us sensitive to change, but often because we feel as if we have never really been accepted for who we are whether it’s by us or by others. Even when we know that we’ve pretended to be something that we’re not to blend in and to gain attention, affection, validation, love etc., we can be surprisingly attached to the security of the costume. ‘But this people pleasing mask and cape is safe. It’s what I know even if I hanker to let the real me out.’

The funny thing is, more often than not, what we resist changing isn’t even who we are. For instance, so many people have told me that ‘needy’ is part of their personality but this is a pattern waiting to be healed. Habits can be modified, tweaked or replaced, especially any that are harmful and hold us back from what we really want.

This resistance to change keeps us stuck in an uncomfortable comfort zone.

We trick ourselves by believing that if change is ‘right’ then it will feel easy and we won’t feel afraid or uncomfortable, which causes us to backslide, often at the points where we’re on the verge of making great leaps. We’re being stretched and it can suddenly seem really daunting to change. We imagine our changed future self and become afraid of too much responsibility. We realise that if we make these changes, we can’t hold on to old patterns or blame the same people or things. We realise that we’re making a commitment, temptying us to hide behind something or someone else so that we don’t have to take the next step or move on to the next stage of our life.

An example of this is when we feel good about key changes we need to make but then we let the unavailable or shady ex slip in, or sabotage a new opportunity like a job or move so that we’re back to being fearful and stressed. That might feel more in line with our old negative beliefs that we’re in truth, trying to distance ourselves from.

Sometimes we fear that the change won’t last and that we won’t be able to cope with future hurt or disappointment, so it feels safer to write ourselves off right now.

On some level we might need a last go-round to force us to awaken to the need for change. It’s often when it becomes too uncomfortable and painful not to change when we stop resisting what in essence boils down to becoming more of who we are.

We are at a time of year when there’s a lot of talk about change and you know what? Change is necessary because when we don’t evolve, we stall emotionally but we also miss out on our own life, however, we’ve got to change for the right reasons.

Any changes we make have to be an investment in allowing us to become more of who we are. That is ultimately what change is about: it needs to make you more of who you are, not less.

It’s all very well if Tom, Dick and Harry are becoming minimalists, or training for a triathlon, journaling, taking up yoga, or deciding to only go out with certain types of people, but these changes will only feel right for you and your life if they mean something to you and ultimately light you up by connecting you to your core and true self. Far too many of us get sidetracked by society’s ideas of what makes a person happy or successful but these don’t necessarily represent our individual values and aspirations.

It’s also important not to blame and shame you into change because it’s not a motivator. If being hard on you was the magic bullet, it would have worked by now.

Don’t try to solve your life or fix the world with one change because it creates unrealistic expectations of your efforts, ultimately setting you up to fail.

Small steps every day has a significant and culmulative effect on your well-being, gradually building your confidence and commitment to self-care. Sure, those small steps might be leading to something specific but taking things a day at a time and noticing the things you do that grow your self-awareness and self-knowledge, is far less daunting than trying to work out everything until the end of time.

Think about the way that you consistently feel and how you would like that to change, and any changes you make need to be about reaching for those feelings in ways that take you closer to who you are and in the direction you want to go.

This means that if you’d like to go from feeling anxious to more confident and content, you would need to recognise and acknowledge anything in your life that contributes to anxiety (habits, people etc) and look at reducing those but also doing small things that allow you to feel more in command of you.

Change doesn’t come without change. As daunting as it might seem to get out of your comfort zone, on the other side of it, if you allow you to stay there for long enough to recognise it, is freedom, your true self, and more loving relationships and experiences.

Don't mistake awareness of the past with holding a grudge or a necessity to press the Reset Button
Loneliness happens when we stop expressing how we feel and lose emotional connections (The importanc...
Feeling Our Feelings Is the Path to Increasing Emotional Intelligence