Dealing With Drainers – the folk who Dump & Charge Up 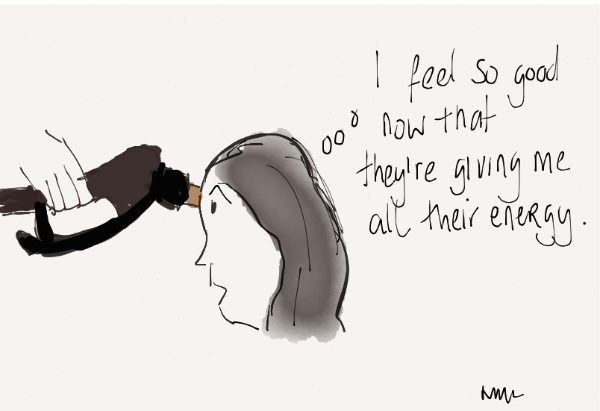 Is there someone in your life who no matter how energised you feel, by the time you’re done engaging, you feel drained out and if you’re feeling low, they max out the last of your energy? When you encounter people who seem to sap your energy, you’re dealing with someone who is a drainer. A combination of you not recognising where your body is alerting you to discomfort around your boundaries along with dealing with somebody who is full-on and so emotionally, mentally, spiritually and even physically taxing, they Dump and Charge Up – offload their stuff on you and then feel energised to continue.

The subject of drainers is a little dicey because on one hand, you may recognise what’s so unhealthy about this person or the dynamic between you both and on the other, you may feel guilty for regarding them as being a drainer because you may believe that you have been a drainer on occasion or confuse draining with healthy confiding and support. It can also be very guilt-inducing for one very particular reason – often, the biggest drainer in your life is a family member or someone who claims that it’s your duty to be their dumping ground or that if you love and care about them, you’ll have no problem with them sapping the life out of you.

It’s important not to mix up being genuinely there for someone with not having boundaries with somebody who you’re afraid to speak up with and who there might even be an element of intimidation and codependency.

Sometimes we mistake being a dustbin or charging station for for being a ‘good listener’ when this can be code for over-empathetic, Florence Nightingal-ing people pleaser who is afraid to appear “rude” and “selfish”.

So what can you do?

1. Be honest about who the drainers are in your life so that you can be more protective of your energies. Sometimes we’d rather play Columbo or Jessica Fletcher trying to understand what they’re doing. It’s one to understand and then do something but it’s another when you’re seeking further understanding because you don’t like what you already know. Note how your body feels, your thoughts, the typical situations and let this invaluable info be your warning signals so that you can take care of you.

2. Own your role. Don’t own their behaviour but take care of your end of things. I used to let family members drain me because I needed to needed and it let me feel ‘relevant’ and even in control. I also rendered me helpless to improve the situation and then complained about them. I decided I preferred to like myself and have a healthier relationship with them. And while it may come as a surprise, you’re not the only ‘supply’ in town. Don’t feel aggrieved, feel relieved.

3. Know your line. Resentment will build (that’s if it already hasn’t) if you don’t take ownership of your feelings and behaviour and take the necessary steps on your end to protect and limit you from their impact. On some level, we hope that the person will appreciate us or change and then feel very short-changed when they don’t. If you wouldn’t be there in the way that you are if you didn’t think that you would get the reward or whatever it is that you’re hoping for, stop and revise your motivations.

4. Set a time limit for engagement. Don’t hold yourself hostage on calls or in situations. This has worked like a dream for me for the best part of ten years – say how long you’ve got when they get on the phone and stick to it. No more than 10-15 minutes, give them a couple of minutes warning before you’re due to go and no matter how much they try to plough on, be firm and say that you have to go and say bye. It was excruciating initially but also one of the best things I’ve ever done. It’s also a healthy way of setting boundaries without getting into a big discussion. 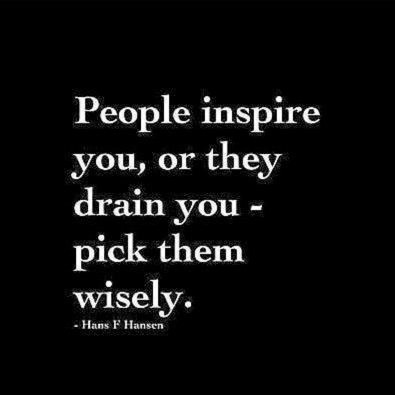 5. Have a ready-made list of exits. Only you know your time, energy and priorities and if you’re always on tap, drainers will take liberties. Value your time and have a quick mental list of things that you can use to opt out with. “I’ve just remembered that I’ve got to be at _______” or “Jeez! Is that the time? I’m gonna have to go because __________”.

6. Don’t fall for that obligations doo-doo. Yeah, I said it. In the past, my mom has made comments about what a “good daughter” should be doing. I don’t recall me signing anything when I came out the birth canal saying that we must have a guilt-laden relationship where she gets to dump on me! The irony is that if you do fall for the obligations line, they feel resentful of you because they know that they’ve guilted you. Vicious circle!

7. Let them crack on with their stuff. Conversations with drainers are not about you providing a solution; it’s about telling them what they want to hear and/or letting them listen to their own voice. Listen with boundaries – don’t stress yourself out trying to find the solution or be the solution. “I’m sorry to hear that” or “I really hope you get it sorted soon… right, I’d better get going…” are easy replacements for trying to break your brain. Remember that you can be empathetic and supportive – honour your boundaries with compassion. They’re obviously going through their own stuff but don’t project or cross your own or their boundaries by making you responsible for changing their feelings and behaviour.