Snooping Never Leads To Anything Good 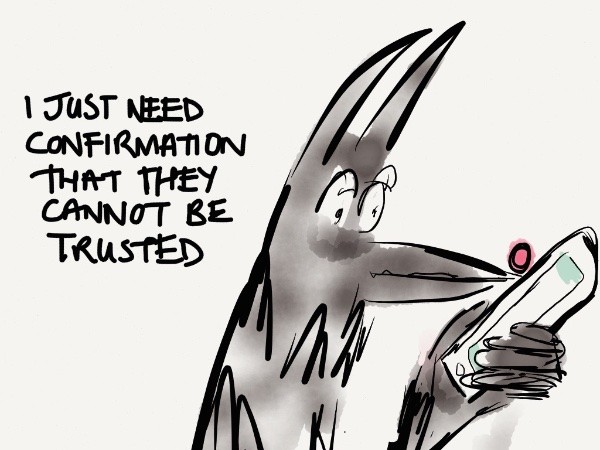 Longtime readers may recall that while pregnant with my first daughter, I got into the hidden camera show ‘Cheaters’. The premise is people who suspect their partners of cheating have them investigated and followed… and then confront them. I know, I know. But I was signed off with a bad back at 34 weeks. Call it Baggage Reclaim research, haha. It fascinated me that people either wouldn’t trust the information they already had or that they would go on TV before they would communicate with their partners or make a decision.

There are clues as to why you suspect your partner of cheating (or whatever it is). And unless you’re projecting, so that’s when you’re up to something, feeling bad about it on some level and then looking to dispel that feeling by finding a similar fault in them, or when you’ve already got the story in your head and just want to bring the self-fulfilling prophecy to its conclusion so you can be right and remove uncertainty, those clues, if you pay attention, provide you with a hell of a lot of the information that you need.

The first thing you need to admit if you’re tempted to snoop or already have is that you have trust issues.

And a relationship without trust is like washing your front but not your back–mucky.

If you won’t use your senses, your gut, your brain, your self-awareness, etc., to take a reading on a situation, to open up a dialogue, to help you figure out whether an experience is in alignment with the values you profess to have and the feelings and life you want to experience, snooping, hiring detectives or even dragging your partner on reality shows become the substitute for these.

I regularly hear from BR readers who have taken to playing Columbo or Jessica Fletcher behind their partners’ backs. It can start out as what seems fairly innocuous. But… as anyone who has ever had a ‘little snoop’ can attest to, like Pringles, once you pop, you can’t stop. I don’t even eat Pringles that often but leave a red tube in front of me and they will disappear. Fast. Anyway, I digress.

Just in case you have any doubts about what snooping involves, here are a few examples:

Why do people snoop on their loved ones?

Because they’re either looking for something to validate the story they’ve decided on, or they are looking to validate concerns related to code amber and red alerts. There’s also a section of snoopers who use it as part of an overall m.o. of controlling their partner’s movements and being abusive.

If you’ve ever snooped on a partner, you may have felt insecure and used it as a means of reassuring your doubts and calming your unease. Or, you may have had genuine cause for concern and not enough faith to cover it, and so you looked for answers to validate what you’re feeling and/or to clear away those doubts.

Regardless of how it’s packaged though, it is a violation of their privacy. It’s also a breach of trust that can leave you feeling undignified and even trapped in a disempowering vicious cycle of shame.

Snooping puts us in a bind because:

Control isn’t love; it’s control. If we want to be in mutually fulfilling, loving relationships with care, trust, and respect, our relationships cannot be about power and control. Ever been stifled by somebody’s jealousy and possessiveness? Yep, that’s not love; that’s control.

Snooping is temporary protection against doubts. The next time we experience the feelings and thoughts, if we haven’t addressed the root cause and learned how to self-soothe and also communicate with our partner, we will snoop again. And lather, rinse, repeat.

It’s pseudo control even if the other party doesn’t know about it. We’re trying to remove uncertainty, but we cannot control the uncontrollable. We are engaging in snooping in lieu of having more command of ourselves and being conscious, aware, present, and responsible in our relationships.

I’ve also noticed something quite interesting about snooping:

What also happens is that even if we do find evidence, we keep it to ourselves. It’s not just because we don’t want to reveal what we’ve been up to; it’s often more so because we see the evidence as an indicator of something about us. This then becomes our motivation to step up with people-pleasing to try to influence and control their feelings and behaviour. We might blame our worth or think that we haven’t ‘proved’ ourselves enough. Or we feel that we’ve ‘done’ something to provoke the existence of the evidence and then reason that if we want to feel better, we have to make them feel better so that they behave and the evidence ceases to exist.

We also have that sense of knowing what we’re working with. It’s as if the uncertainty has been removed (for now) and we can just bury our heads in the sand. In some respects, we can be reassured that we are in our pattern. This, however, ends up validating our unhealthy beliefs.
The funny thing is–and this could the subject of a post all by itself–if we fess up to snooping after finding evidence, sometimes the other party starts up with the, “Oh! So you obviously don’t trust me! Right, well I might as well not bother anymore. I won’t stay in a relationship where I’m not trusted!” malarkey when presented with that said evidence. What the what now?

It’s true; you don’t trust them. And you have good reason not to. Even without your snooping, they were up to no good. Your lack of trust is an issue, but it’s not the reason for the issue of their existing actions.

Whether it’s a momentary lapse in judgement or a series of lapses that have made snooping a habit, halt.

It’s not the kind of behaviour that you can carry with you if you’re on a journey where you want to feel good about yourself and enjoy healthy relationships. No one wants to feel unsafe and ultimately, where do you draw the line? You can’t keep crossing their line in order to make you feel better.

If you have snooped, even if you have found evidence, apologise with no equivocations. Just like you don’t want anybody blaming you for what they do, you need to own your actions so you can learn from them. If the evidence shows where they’ve erred, you apologising doesn’t change that.

The urge to snoop or even going ahead and doing so has often proved to be a watershed moment. It can force you to acknowledge that you’re either not happy within and that you need to focus on supporting you. It might flag that you need to work on your personal security. Or, you recognise issues about the relationship that you’ve been denying, rationalising and minimising.

If staying in a relationship or feeling ‘OK’ is going to come at the cost of your dignity due to snooping, that relationship and/or the snooping isn’t worth it. Snooping never leads to anything good. You either end up feeling crap for doing it, or you end up finding evidence of what you already know but are too afraid to admit. There are better ways to calm insecurity, and there are better ways to bring concerns out into the open or exit the relationship.

Chasing Crumbs & Perfection: In Pursuit of The Fantasy
Podcast Ep. 190: Did I scare them off? Was it my Jedi mind tricks?
Building Boundaries for Healthier Relationships