Do You Really Need To Investigate What Someone’s Intentions Were Or Prove That You’re ‘Right’? 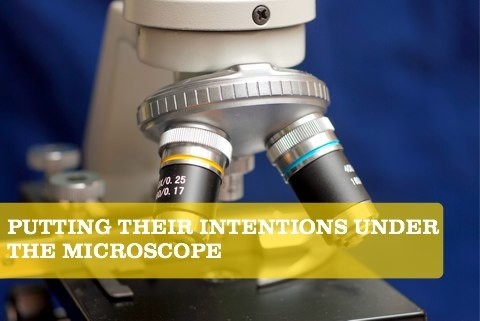 I got talking with someone recently who revealed that they’ve just spent over a year – that would be over 365 days – researching what they thought may be their ex’s issues, because they wanted to clarify whether he had a ‘condition’ that they could pin his behaviour in their unavailable relationship on. Aside from a misappropriation of energy that would be better spent on herself, you do have to wonder why it’s so important to practically get a Ph.D in another person just so that you can rest assured that their behaviour wasn’t intentional?

If immersing yourself in researching another person and working up a diagnosis is familiar to you, there comes a point when you have to have an honest conversation about what it is that you’re trying to achieve and more importantly trying to avoid, because unless you’re going to use the insights you gain from looking at your relationship and the actions and mentality of another person to ultimately gain a better understanding of yourself and apply the lessons learned, why bother?

There’s also another type of research project you might undertake – proving to yourself and the other person that even if they like to think that it was you that did ‘all’ of the chasing or had ‘all’ of the problems, that you have evidence that suggests otherwise that you’ll be ‘presenting’ to them.

Now I get it, because quite frankly, it gets on my tits when people rewrite history and try to make out like it was one way traffic that had nothing whatsoever to do with anything they said or did, or that every person who doesn’t jump to their beat or has needs is a “psycho”, or even claiming that any issues in the relationship were the fault of the other party. You can get caught up in seeking a retraction, telling them all about themselves, and even trying to tell others, but there hopefully comes a point when you recognise that the point of knowing the truth is to set yourself free with it, not to clobber the other person with it and tie them to a chair to force-feed them reality.

You can investigate what someone’s intentions were, although really, it’s like trying to crawl inside their brain and control the uncontrollable. You can also play Columbo and have your hunch and spend an ‘episode’ of your life working your way through clues and trying to catch them out while pretending to be absentminded in a dirty mac and a cigar.

It’s all about the net result though – when all is said and done and you look at reality which is reflected in how the relationship currently stands (not what you’d like it to be or who you think they could be if only they realised the potential you’ve forecast), or you look back on how things were, what do you have?

A mutual relationship with love, care, trust, respect, shared values, plus the landmarks (commitment, progression, balance, intimacy an consistency)? Or a messy mix of illusions, pedestal building, fleeting highs, and crushing lows with someone that you claim amazing ‘chemistry’, ‘connection’, and that you have “so much in common” with?

When all is said and done, it’s not about proving what someone’s intentions were – the results speak for themselves.

Intentions are all about doing something with conscious purpose – whether a grownup does something intentionally or not is by the by, especially when it’s not a one off and contextually forms part of a body of evidence that suggests that whether they do something on purpose or not, they do not have the integrity, conscientiousness and level of personal responsibility that could ever add up to being part of a healthy mutual relationship.

It is up to each of us as individuals to prove what our intentions are with ACTION, so don’t waste your time trying to prove theirs.

What we do and don’t do (or say and don’t say) impacts others. If you are not inclined to act responsibly both with yourself and others and you are even at conflict with values you profess to have, your mentality, actions and what comes out of your mouth will be out of sync.

Hard as it may be to hear, part of the reason why it can be attractive to get a Ph.D in someone else and pin a condition on them, is because 1) it’s avoidance of addressing your own behaviour, 2) a vacation from having to actually make your own life your purpose, and more importantly, 3) giving yourself an opt out, because if you can say that something wasn’t intentional, you can be tempted to play Florence Nightingale again, or at least believe that you are helpless and that everything was outside of your control.

If you’re going to investigate the crappola out of someone, at least relate what you discover back to you, not so that you blame yourself but so that you can gain insight about why they were attractive to you, or whether you are catering to a dynamic due to unhealthy behaviour on your own part. It’s also important to heed the topline information so that you can get to the bottom line – it was unhealthy, or you were incompatible, or whatever, so this relation-ship could not sail.

And yes, you could go to great lengths to prove that it wasn’t all you and that on June 9th 1989 they said X or April 17th 2011 they did Y, as if “Ha! I’ve got you sucker! You think you can act like this whole thing was in my imagination or that I’ve been doing all the pursuing? Think again! I’ve got proof! Now what have you got to say for yourself?”

As is often the case when you tell someone all about themselves, you’ll either be met with silence, a blank “What the frickin’ what?” stare, aggression, or them marking your cards as a “psycho” or even a “stalker”.

Convincing and campaigning isn’t attractive – the person whose intentions you’re trying to prove or who you’re trying to prove as ‘wrong’, is going to believe whatever they want to, so all they’re going to do, is take their intentions and cock up another relationship, or remain deluded and keep winding up in the same situations with their delusions.

You on the other hand, if you’re willing to look at the net result and grow out of the lessons you learn from understanding why you stayed and continued once it became evident, actually get to avoid repeating the same issues. The longer you spend investigating or proving, the further you are away from this.

Superficial relationships signal the need to develop a more intimate relationship with ourselves
Are You Too Eager For The Fairy Tale 'Ending'? The Returning Childhood 'Sweetheart' Revisited
After The Breakup: Hold Tight To Your Self-Respect and Stop Trying To Be Friends With The Ex That Mi...