Are you drowning in detail? The importance of heeding the ‘topline data’ of your relationship 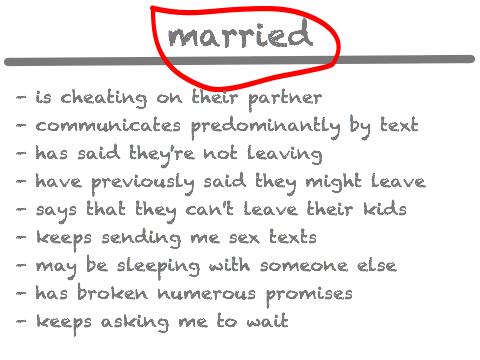 Back in the day when I worked in advertising, I’d use research data for pitches. As I’d experienced enough boring presentations, I recognised the importance of delivering the most salient points. There was a saying that we used to bandy around a lot that forced us to cut through the fluff:

“Give me the topline data!” – I talked about this a couple of years back with my post How bad do things have to get?

“The topline data in relationships are the key overall ‘symptoms’ of your situation. Many of us get lost in the details, investigating the other persons problems, looking for understanding of why every last little thing is happening and rationalising the situation by finding even the smallest of anomalies to justify why our situation is different, why the person is an exception to the rule etc.”

I’m reminded of this when I, for example see readers complaining about umpteen things that a person is doing and then adding that they’re married, and then seeing other readers (hat tip to Grace, Fearless et al) remind them that actually, it’s them being married (or attached) that’s fundamentally the issue. The other stuff is the detail and contextually, as in, in the context of being married/attached, it’s actually what you consider to be important enough to latch onto however they’re inadvertently legitimising all of the reasons you should be exiting. 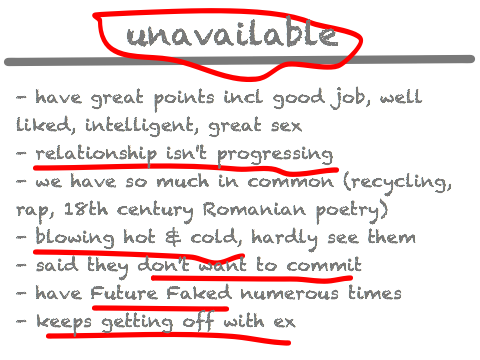 It’s the same when people tell me that someone hasn’t been calling, keeps blowing hot and cold, won’t commit to being with them, won’t commit to not being with them, is sleeping with someone else or trying it on with someone else in the office…oh and they said at the start that they didn’t want a relationship, or that it was never going to be anything other than casual, and yada yada yada. They’re unavailable – not committing to action never mind a relationship is top of the agenda hence actions and words don’t match, hence there’s a problem, hence you’re not mutual.

Often, when you’re drowning in the detail and you keep bringing up certain points about their behaviour, you’re actually inadvertently supporting the topline information about your relationship.

Take the married example pictured. There’s no point in ‘suddenly’ realising that they’re cheating and married, or thinking it’s for some noble reason – there’s no such thing as an honest cheat. They have to communicate by text because they’re cheating, they’re not leaving because they’re married, they’ve said they might leave because they’re married but if they’d immediately said that they weren’t leaving you might have cut off the free access to the Crumb Per View shag, ego stroke and a shoulder to lean on.

It’s quite easy when you’ve lost sight of yourself and your values to be unable to see the wood for the trees. You get so used to justifying your initial reasons to be with someone, and then you get used to justifying your subsequent reasons, and after a while, it just becomes one big justification drive. It’s about having a reason to stay and avoid getting out of the comfort zone with an uncomfortable but necessary decision, even though you’re actually making a very good case for why you should take a parachute and jump.

Last year I wrote about whether you can elevator pitch your relationship issues – can you take a story that you might spend hours telling and get down to the core problem and explain it in 30 seconds to a minute? It helps you drop all of the excuses and denial so that you can focus and stem the distraction.

When there’s a presence of code red and amber issues in a relationship, they trump the detail. Trump.

Clinging and drowning to detail actually shrouds the relationship and your vision of it in illusions. The more detail that you’re using to justify and explain your relationship, is actually the greater indication of how much boundary busting and values conflicted behaviour and bullshit that you’re putting up with.

If you’re trying to work out what you should do next and how to make a decision, use the topline data to guide your decision and add context to all of the other information. When you do, the path to doing the right thing by you will open up. Until then, you’re just painting yourself into a corner with detail and excuses.

When You Feel Under Pressure From Family To 'Forget' a Drama Just In Time For The Holidays
Trading On Your Looks & Sex Appeal Part 1
Advice: Does polygamy work, because I love three women?