Are You Painting Yourself Into a Corner? When Your Beliefs Remove Your Options 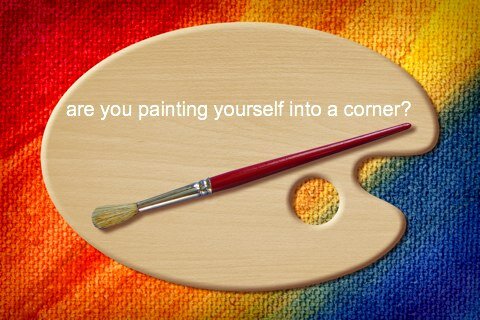 Over the weekend I released my new workbook Get Out of Stuck, my guide to helping you kick relationship insanity and transform your beliefs. I wrote it for a hell of a lot of reasons but not least because at the heart of most issues, especially the ones we’re ‘stuck’ in, are your beliefs and potentially your boundaries. Over this past week, I spoke with and corresponded with a few readers and there was something that became apparent:

The most common example of this is where you don’t feel that you can trust them but you don’t feel that you can trust yourself either, so you essentially end up miserable and immobile. When they tell you something, you don’t believe them and whatever you’re afraid of and whatever negative beliefs you have about yourself, you align this opportunity for distrust with those beliefs. It then becomes ‘I’m not good enough to be told the truth’;’They’re going to leave me’;’He’s found someone better than me and he just doesn’t know how to tell me straight’;’I knew they were cheating on me’ or whatever it is that’s swirling around in your mind.

The trouble is that when you have these fears, any time anything remotely plays to those fears, your mind will swing into overdrive. Somewhere in your mind it says ‘OK, is this where I’m going to get it confirmed that I am X’?

So let’s imagine that you have the belief ‘I am not good enough’.

When your partner says that he wants to take things slower because he has some problems that he has to attend to before he can be serious about the relationship, your spidey senses will go into overdrive and your ‘fear bells’ will start ringing.

What he’s saying could be true or it could be a slow fade to make their way out of the relationship. You’re going to be far more inclined to believe it is the latter if you have been habitually involved with people who don’t know how to be direct and take the easy way out.

Whether it’s the truth or a lie, the one thing that remains consistent is the negative belief.

This is painting yourself into a corner, putting yourself between a rock and a hard place, and getting yourself stuck. You’ve created a situation where it doesn’t matter whether it’s a truth or a lie, they’re still telling you the same thing.

Now if you’re in a situation where no matter what happens, you’re going to believe the worst about yourself, it stands to reason that the only way you’re going to get out of stuck, is to address the root belief, why you have it, and transform your outlook and beliefs so that you don’t paint yourself into a corner with your thought process.

Don’t believe how easy it is to paint yourself into a corner. Watch it in action.

E.g. I think sex is really important. Why? Because it connects two people and it shows how much they love one another. However, I’m cautious of having sex because I’m afraid that they won’t like my body or that I’ll be vulnerable. I’m afraid they’ll discover I’m not good enough. If I don’t have sex, I wonder what’s wrong with me and why I’m not good enough. Painting herself into a corner.

E.g. He told me that he really wants to make this work and that he’s crazy about me. I know I should be happy – I’m worried though because I don’t know how to trust that this is real. What if he sees that I have flaws? Note that if he said that he wasn’t ready for a relationship, she would think that it was because she has flaws that make it difficult for him to want to be with her. Painting herself into a corner.

When you paint yourself into a corner, get stuck and remove your own options, there isn’t an outcome where you can even be moderately happy because your negative belief(s) mean that each situation creates the same feeling within you. This is why some people are bewildered as to why they are not happy when for all intents and purposes they should be – because they don’t believe they’re good enough and they don’t trust whatever good is happening.

If you think something about yourself or something that leaves you with no room for a positive outcome that leaves you in peace, something is very wrong. This is why it’s important to address your beliefs so that you can not only open up your options but you can take a leap of faith on yourself and believe in you and the possibilities instead of believing the worst.

Check out the rest of my books including Mr Unavailable & The Fallback Girl , the No Contact Rule and more in my bookshop.

Transitionals & Rebound Relationships: What's on their mind when they're not over their ex but they'...
Reflections: You don't know me... but I don't know me either
The belief that you're not 'good enough' is a reasoning habit
Share this...