Do you have Dater’s Block? 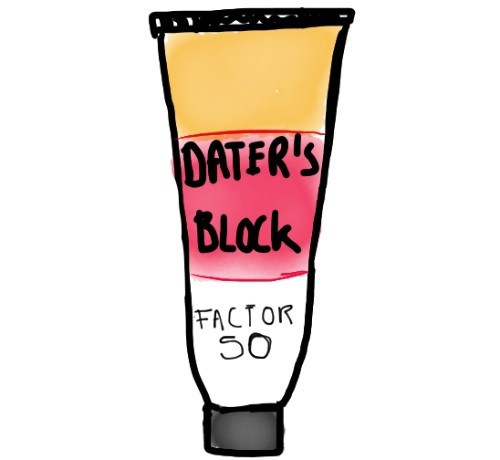 After a breakup or a period of being single, many people struggle with getting back out there again, ‘there’ being into the dating pool. Whether it’s because they’re unsure of themselves after a period of grieving or that the last time they dated was pre-internet and booty calls, or they’ve gotten very used to their space and are fearful of risking it in a new ‘venture’, or just that they have their newfound boundaries or even assclown radar turned up on high, these people are struggling with the dating equivalent of writer’s block.

Dater’s Block is when you end up with a sort of paralysis about proceeding with dating. Primary concerns are wondering whether you’re ready to date again, being fearful of getting it wrong, and even more pressing, whether you’re going to get burned again. It’s actually at the point where you’re reaching readiness, or where you’ve already tentatively dipped your toe in or have even met somebody, where Dater’s Block is most likely to strike. Dater’s Block runs on fear. It’s fear of change possibly including fear of being done with your previous relationship. It’s fear of effing up and disappointment, fear of using up the one chance you’ve given yourself, fear that the next relationship might go somewhere and you might not be ready or perfect enough, or that if you go ahead with this person you haven’t even met yet, that you could end up missing out on something better, or that in twenty years time it might be over and you might kick yourself. It’s fear of ‘feedback’ and yes, criticism, and it’s fear of being judged as less than perfect, so of course if you don’t try and instead procrastinate, nobody’s going to get close enough to chip in their two cents plus you’re not going to have to expose you to more of your own judgement. Of course this is a trap because once you have Dater’s Block, you end up giving you a hard time about it anyway.

Dater’s Block has a lot to do with why a lot of people break No Contact (or are tempted to) when they’re actually making a lot of progress or are getting to the acceptance stage of the grieving process. They panic because they realise that they’ve been getting on with their own lives, that they’ve barely thought of their ex, or are even feeling attracted to someone new. I also hear from a lot of people who effectively want to almost grieve perfectly – it’s amazing how much perfectionism can affect so much of our lives. They end up with Dater’s Block because they want closure to look a certain way, or they want an apology or to have 100% of the answers. Some want to feel perfect before they can date, or are waiting for the perfect moment or to be given some sort of sign from magpies or a psychic or something. And some people want to know the ‘ending’ in advance so that they can know that they’re not ‘wasting’ even a moment of their time. Of course they know this is unrealistic and can’t avoid the due diligence that the discovery phase of dating involves, so they end up stuck and frustrated.

Often, particularly when a lot of our self-esteem is based on judgements we’ve made about previous ‘mistakes’ and where we feel that we’re less than up to scratch, fear takes over and we limit ourselves instead of having the freedom to try while trusting ourselves to have and to act with our best interests at heart. We end up being so critical and judgmental of ourselves that we can’t go anywhere as we’re afraid of making one false move and not getting things ‘right’. Some self-compassion including patience and a willingness to listen to you, would pave the way to unblocking so that whether you’re single or having a go at meeting people and of course letting things unfold, you’re not living in fear (and responding to it) nor are you feeling persecuted by your self-judgement and criticism. Your thoughts?

PS I guested on my local community radio station earlier this week. You can listen to the recording of the show here.

Why Do Guys Cancel Dates?
Fast-Forwarding: When Someone Speeds You Through Dating
Podcast Ep. 168: Freaking Out Over Decisions (lessons from panicking about my daughter's exams)