Getting Blinded By Your Principles 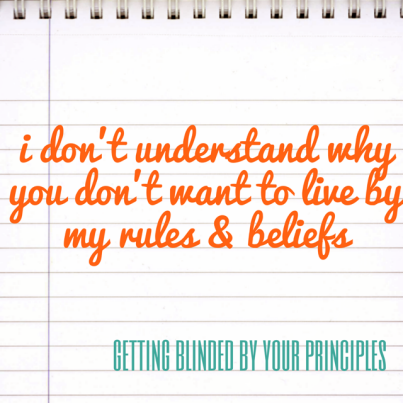 We can suddenly be very clear on our own beliefs or even our ‘rules’ about our personal behaviour or that of others when things don’t go our way. When people go for the five hundredth round of rumination on the same thing, or they’re doing a lather, rinse, repeat with someone that they desperately want to change instead of ‘admitting defeat’, or they’re feeling the pain of living with too many assumptions, they’re blinded by their principles.

Don’t get me wrong; it’s very important to have your principles (or personal commandments). These are really your own guidelines for personal behaviour based on truth, assumption (although be careful of running with assumptions that don’t hold true for you or others) and law. However, if you don’t address the bigger picture when there’s more than one person involved and basically evaluate your own position, the true result of those principles will be warped by stubbornness.

Are you really going to drag something out for days/weeks/months/years over principles that someone else isn’t abiding by?

Why do you feel that you have to ‘teach’ or ‘show’ this person?

Are you okay with being a martyr? This is where you’re being taken for a ride or even abused but then quoting your principles about why you’re still there.

Are you going to continue trying to impose your principles on someone who’s shown or said that they’re incompatible with yours?

Where do you draw the line?

Somebody said to me recently, “It’s my policy not to get angry.” Apparently, it makes people look “childish” and “unsavoury”. Of course they’re deeply unhappy and I suspect that they’re going to erupt one day with all of those suppressed feelings. This would be one of those times when I would say “Eff your principles!”

When a friend said it felt wrong that her married ex was “getting away with it” by being able to return to his marriage that incidentally, he never intended to leave in the first place, I asked, “What are you going to do? Turn into the married man vigilante? What are you going to do when the vigilante for Other Women turns up?” And we ended up having a laugh at the ridiculousness of the situation.

Sometimes you’ve got to know when to fold.

Principles are wonderful for fighting on your behalf. Like stepping up for you and representing your needs in a respectful manner or for driving a cause. Principles can be problematic, though, when you’re essentially making yourself miserable by going toe-to-toe with someone with who you’re incompatible or who, at the end of the day, in the bigger picture, it’s not worth your misery.

Don’t get blinded by your principles, especially when they kick in belatedly.

Yeah, sure, you could make it your mission to make someone abide by your principles and even play deliverer of what you determine their karma to be. Side note, this is skewed because it’s based on your perspective and seeking justice for you. However, it’s best to get out of the situation or distance yourself from that person as quickly as possible so that you can get back to being you. Or… agree to disagree.

It doesn’t mean that they’re ‘getting away’ with anything. You trying to drive your agenda through isn’t really a natural consequence; you’re trying to control the situation or their karma. Ultimately, it’s not up to you to spend your life clobbering lessons into others when you could be living your life according to you.

Reclaim You: 100 Tips For Dating With Your Self-Esteem In Tow
Why Rebound Relationships & 'Florencing' Are Like Hospital Stays Or Retreats For The Emotionally Wou...
Everything In Relationships is Contextual: Ask Yourself What Does This Mean To Me or Our Relationshi...