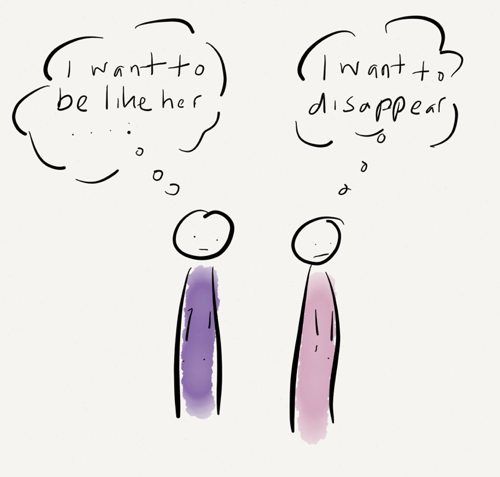 with your misplaced assumptions.

You don’t know me.

You don’t know me, but you think you do.

You see someone ‘like me’ and think that I haven’t got problems or that even if I do, I should be able to deal with it better because of some rationale you’re using to judge me.

You don’t know me.

There are times when I don’t feel good enough to stand beside an ant. It’s easy for me to think that you’re better than me because I’ve spent my whole life feeling inadequate.

I’ve been out with people who haven’t got two beans of integrity to rub together and I’ve still thought that they were better than me.

I compare myself to others and yet these same people have their own struggles that I’m too absorbed in my own pain to see. You compare yourself to me and I don’t even want to be me.

Do you know what it’s like to be consumed by chaotic worry? Do you know what it’s like to worry about adult problems when you’re barely out of preschool? Are you terrified of getting things wrong and of disappointing people? Have you tried to underachieve to get people off your back? Have people you desperately want approval and love from left you, forgotten about you, called you names, told you that you’re worthless and that you wouldn’t amount to anything?

For a long time, I didn’t know me either. I knew all of my experiences, the stuff that’s been said, done, not done, but aside from that, I didn’t know who I was. Who was I? Who am I when I put the past and what I think ‘everyone’ thinks aside?

For a long time, I was my thoughts about my experiences and how I believed that they reflected on me. Outwardly I appeared confident, outgoing, intelligent, attractive. Inside, I felt stupid, worthless, good for nothing, alone, unlovable and ugly.

I didn’t say these words very often to myself but I listened to the ugly melody and I was so used to the words that I stopped hearing and listening, and yet I knew that they were there.

Of course I filled my head with other punishing thoughts that danced around that backing track. I raked over every f*ck up, every injustice, every misstep, every warped communication. I had an ‘I’m not good enough’ bias that informed my perception of me and my options and in turn helped me to make bad choices. I looked for information to support that bias. I beat me and that I’d be nice to me again until next time. This is life.

I don’t advertise my pain with a placard, flyers or even neon lights. If you spend some time around me though, my carefully lidded pain will spill into my actions, which will contradict my words or other actions. When I do well, I’ll blame it on luck or play it down. I’ll achieve and then be scared that I’ll be found out as a fraud.

You don’t know how much I try and how much I overgive to compensate for my lack of worth.

You don’t know me yet you judge me with your assumptions, even with the ones that you think are positive.

How do you get to judge me as being better equipped? On my looks? On my weight? Perceived status? My intelligence? My education? My background? What?

Each time you make assumptions about me and compare, you judge.

Whatever you judge me on, reflects what you believe determines value and experiences.

You think things are a certain way due to the factors you focus on because you judge your own worth and problems based on yours. You assume people’s lives are better or worse because of these things because it’s how you judge your own life.

I can’t expect people to get to know me if the reason I choose to engage with them in the first place is due to assumptions I’ve made that chime with my own story or projected fantasy.

I could continue to make assumptions about me and judge me but then I’d go nowhere and I’d become less than I am. It’s like running with the first idea and refusing to back away from it and then ploughing loads of investment into a concept that ultimately doesn’t serve me.

If I want people to know me, I’ve got to get to know me and be me.

I’m mad at you for judging me but I’m even madder at me for being so judgmental of me and my past. I have to practice humility and not be so quick to judge me whether it’s for my flaws or judging me to be the center of Other People’s Behaviour or seeing life as a reflection of my worth, because it removes my control over my life, my time, my identity.

You don’t know me but it mattered a lot more when I didn’t know me.

Now that I’m not assuming and judging me, nobody, including me, can use that against me.

Comparison and assumptions drain your confidence and blind you to reality. It’s using insecurity and bullshit to inform your outlook and actions and next thing you know, you have a distorted image of your own abilities, appearance and character. Get out of your head and into your life where you can get to know the real you and others, in reality.

From The Other Woman to Happiness
Happy Birthday To Me: 35 Thoughts On Relationships, Self-esteem and Life
Are you treating all conflict and criticism as 'bad'? Negative associations strike again!