Revisisted: Blessings In Disguise – Be Thankful That They Didn’t Show Up and Other Things To Be Thankful For 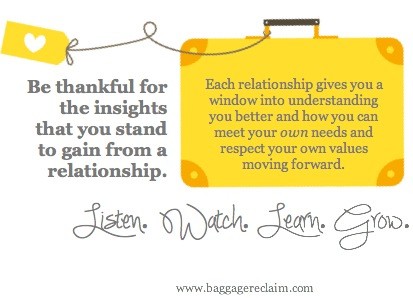 Even though you may not be able to see it right now, one day you will experience something else that will show you why a particular difficult experience was a blessing in disguise. Would you go through it again? Hell NO, but if you can discover the positive message and beneficial insights and truths that lie within, in time you’ll find emotional peace.

Be thankful that they didn’t show up. They’re teaching you who they really are and that’s not someone who deserves the time of day from you. Now you can move on.

Be thankful they haven’t called you up since you started No Contact. You cut contact for a reason and even if they did call, it’s unlikely to cancel out the pain you’ve experienced or meet your expectations.

Be thankful that they ended things when you couldn’t, even if it was in a sucky manner. Him/her doing for you what you couldn’t do for yourself at the time, is a wake up call for you to have your own back in future.

Be thankful that they repeated their past behaviour with you because you can stop kidding yourself that they’ve spontaneously combusted into a better person and leave them be.

Be thankful they haven’t left their wife/husband/partner. If your relationship is based on lies and they’ve kept you waiting around while they make up their mind about what they’re doing, they’re doing you a favour. You just don’t realise it yet.

Be thankful that you recognised that they couldn’t meet your needs and that you were, in fact, incompatible. Now you can become more self-aware and focus on living your life congruently with your values so that you can be happy.

Be thankful that you set boundaries. They’re giving you self-respect and even though it may feel uncomfortable initially, especially when people who expect to get their way can’t and don’t, stick with it. In the medium and long-term, you will reap the rewards by being in situations and around people that reflect a more positive you.

Be thankful that you didn’t judge a book by its cover and you decided to go on a second, third etc date with someone who didn’t set off fireworks as soon as you met like all your exes did.

Be thankful that you’re single. Don’t treat it like that pain-in-the-bum time between relationships. Enjoy it and discover and love you independently of a relationship so that you don’t shortchange yourself in the future.

Be thankful that they said “I don’t want a relationship now” and other such guff because if you heed the code red warning, you’re getting an early opt-out with no penalties.

Be thankful for the insights that you stand to gain from a relationship. Life serves us lessons to teach us about where we need to adapt our thinking and behaviour. Until we’ve learned, they keep coming back like Michael Myers in Halloween. Every relationship gives you a window into understanding you better and how you can meet your own needs and respect your own values moving forward. Listen. Watch. Learn. Grow.

Be thankful that they consistently show you who they are. It’s now your job to accept them and stop hoping that they’ll become the person you thought they were or that they’ll live up to your imagined potential

Be thankful for the experiences —good, bad, or indifferent. Relationships serve to teach us about ourselves. There’s a lot of lessons in there, and you’ll find they won’t repeat themselves if you pay attention!

Be thankful that you said NO. Even though it took you out of your comfort zone to not be so agreeable, recognise that saying YES meant busting your own boundaries, going against your own values, or just doing something that you don’t want to do.

Be thankful that you’ve learned to say NO and set limits. It opens you up to saying more genuine, positive yeses. You are not a Yes Person. You’re Not a Doormat. It’s OK to say NO.

Be thankful for the bad times because they teach you to appreciate and recognise the good times.

Be thankful that they’ve moved on. Yeah it hurts, but it’s the kick up the bum that says it’s time to shift up a gear and move on with your own life.

Be thankful that they beat it after you said you wouldn’t sleep with them when you hardly even know them. Better they reveal their true motives now instead of Future Faking to get what they want and then disappearing anyway.

Be thankful they didn’t want you when they realised they couldn’t take advantage of you or abuse you. It’s not because you’re not good enough for them to change; they’re who they are.

Be thankful that they said they wanted to break up with you. Seriously. A lot of people don’t have the balls and decency to be honest and will stay with you while feeling half-hearted interest, enjoying the fringe benefits and looking out for the next person. It hurts but you don’t want to be with someone who doesn’t value you and the relationship enough to want to put themselves in and work at it. I know it hurts, but don’t sell yourself short by preferring to be in a relationship that’s struggling than none at all. Believe there is better for you.

Be thankful for the small, medium, and large things in life.

Be thankful that there are people around you, whether they’re family, friends, or colleagues, or a ‘special somebody’, that give a damn about you. Look up from your pain and remember them.

Be thankful for the internet. You’ve got to discover Baggage Reclaim, that you’re not alone, that it’s not a ‘unique’, unheard of situation, and that you haven’t ‘done’ something to cause someone to be whoever they are.

So I ask, what do you have to be thankful? It’s important to consider this because you’ll know if you feel that you have nothing to be thankful for that you’re limiting your own potential for happiness. Whatever you’re thankful for doesn’t invalidate any experiences that you’ve had or any unhappiness or frustration that you feel, but think of it as looking at things from a different perspective. If someone is the only source of your happiness, joy, and thankfulness, the trouble is that it’s too dependent on them. Being thankful for other things in your life gives it balance plus if your whole identity and happiness is based on one thing, there just isn’t room for anything else.

Advice Wednesday: How Do I Stop Shaming Me Over My Past Relationships?
What's The Benefit of Believing The Worst About Yourself?
Why don’t they want my love?