Take the focus off them and bring it back to you 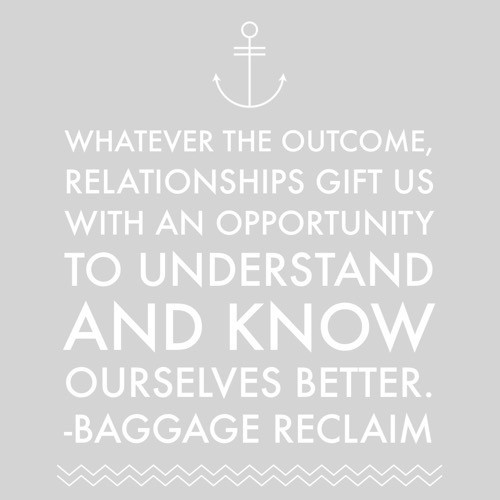 Our relationships romantic and otherwise, give us a window into understanding who we are and where we need to step up for ourselves. When we find that we’re experiencing the lather, rinse, repeat of the same type of person in a different package and the Groundhog Day of yet another situation that leaves us feeling and thinking a certain way, it’s time to ask:

What am I missing here? What am I overlooking?

When we experience the pain of a person unfolding into who they truly are and it falling short of who we wanted and even expected them to be, it’s hard to think about lessons and examining where we’re in effect repeating ourselves.

There is this fear that if we acknowledge that at times we’ve gravitated to a certain type of situation that this makes it “our fault”, when in actual fact it doesn’t; it just explains how we fit into the dynamic. It explains why we were vulnerable to this person stepping into the ‘opening’ in our life. It explains why they were attractive or activated something in us, and it’s far from being a sign that we have Jedi mind tricking abilities.

These experiences provide insight into where we need to expand our awareness so that we can grow and transcend this particular type of dynamic. It’s how we stop the disappointment cycle.

Wising up means that in adapting our outlook and supporting behaviour, the next time that that type of person or situation comes a knocking, we will make a conscious choice to choose a different path. It may not even come our way because we’re no longer a ‘good fit’ for it.

In the aftermath of things not working out, it’s hard to feel thankful about not being with the person or opting out of the situation because in seeing ourselves as being inextricably linked to why that person acted as they did, or why we were disappointed, or why the situation was what it was, we can’t see the wood for the trees. We’re too busy blaming and shaming ourselves. We’re too busy feeling that we’ve been robbed. We’re feeling rejected and at the same time wanting to reject information that would actually help us feel less rejected by adding some balance to the proceedings.

The weird thing is that sometimes we don’t know that we need to address something until it’s mirrored back to us in the other party’s behaviour. It’s not neccessarily the one-off stuff but the habitual stuff.

I would love it if we were all armed with the self-awareness, self-knowledge and relationship smarts as soon as we rock up into adulthood but it’s only through experience where we discover what we do and don’t know.

I can remember with one particular ex as he launched a volley of putdowns and deflections at me that I thought, “Wow, I really must hate myself to be with him.” It was this scary lightbulb (more like punchbulb punching me in the head) moment.

It’s not that my self-hatred was an invitation for his behaviour and that if I liked me more that he would spontenously combust into boyfriend of the century but when I finally was ready to put ego aside where I had an inclination to make everything about me, ‘little’ realisations like this had been happening over a few years. I knew they were trying to tell me something and in fact, I even heard what these experiences were saying a few times along the way but it was like, What was that you said? I don’t really like myself and this guy is behaving like a tool because that’s who he is? and then my ego would come rushing in and it would be, Ah yeah but what that really means is that I don’t like myself because I’m worthless and good for nothing and that’s why he’s behaving like a tool, and the crucial info would be drowned out and I’d be back to doing the people pleasing and unavailable dance.

In truth, when we like, love, care about, trust and respect us more, we would not be attracted to or continue to be around somebody who doesn’t reflect that outlook.

We won’t be with somebody who does less than what we can already do for ourselves.

We certainly won’t continue to make us the solution to their problems and we most definitely won’t keep trying to make them change in an effort to ease our discomfort about the situation. We’ll take charge of relieving our discomfort instead of giving away our power.

You know what all of my unavailable relationship experiences did? They forced me to grow up. Due to the pain I went through and how it all spiralled out of control and crippled my health, facing me and all of these experiences forced me to finally be a grownup with my parents and extended family instead of three-year old Nat feeling wounded, abandoned, and looking for love in the wrong places. In doing so, I allowed myself to feel, to think, to have needs that I could step up and assert within my relationships and to also just be.

Talking with a friend who has a habit of going out with highly insecure guys who either start getting all ‘Chopper’ on her (cutting her down with comments and manipulative behaviour) and/or who she plays armchair psychologist with, I asked her what’s the draw because that’s what’s being overlooked. It’s not a coincidence that they’re same relationship different package and the truth is, these guys are all over her at the start with their Fast Forwarding selves and she feels on top of the world and then the same ‘ole problems set in and she feels drained.

Being adored by somebody who initially thinks that they’ve struck gold and in essence being put on a pedestal eventually comes at the price of her contentment and the possibility of mutual relationship. A part of her is insecure in the sense that a guy who isn’t veering between awed and threatened isn’t attractive. She realises that she needs to address that part of her that for some reason doesn’t feel “good enough” unless it’s with this kind of guy even though she eventually ends up feeling “not good enough” anyway due to the way that these relationships pan out. The latest guy has been the worst experience of it and she’s seen it in a much shorter period of time and enough is finally enough even though of course it hurts.

I don’t necessarily say, “I’m really thankful for [the shit experiences]” but ever since I stopped feeling and acting as if each of the hurts and disappointments were terrible plot twists that robbed me of happy endings that ‘should’ have happened and that were making me into a doomed person, I can most definitely see that some of these experiences were blessings in disguise providing me with lessons I needed to learn and some of them were just flat out horrible/painful experiences. I can be angry forever more that certain things have happened but that will be dooming me more than any of the experiences ever could.

Long-standing anger and self-recrimination create major problems especially as we use these as the basis for determining our next moves.

If we keep telling ourselves that something that represents loss of self, pain, and an unhealthy dynamic was the “right” thing for us, life will throw more opportunities for that dynamic to come along, either with us going back to a person or taking up with new version of them in a different package. We can’t expect that we will see, appreciate, and ‘get’ somebody or something that represents a different, healthier outlook while on some level insisting that the people, dynamics and things that represent the loss and pain are where we need to be at.

It’s very easy to focus on what another person is doing but use that information to point you to where you can understand and support you better. Take the focus off them and bring it back to you.

PS Happy Thanksgiving to all of my readers who celebrate! As always, make sure that the only turkey you’re messing with is the one on your plate! Check out the blessings in disguise posts as well as ‘I’m not that woman’.

PPS The People Pleasing Diet is now open for registration.

11 Love Reality Checks for the New Year
Forget this hinting malarkey. I'm going all the way.
Are You Insecure About Whether You're Insecure In Your Relationships?