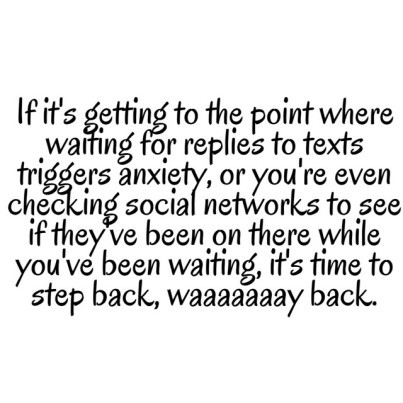 I’ve witnessed a lot of tensions and conflicts between people due to the expectation that they should have got an immediate or fairly swift reply to text messages. When a person perceives a reply to be ‘slow’, it can trigger a spiral of anxiety where they wonder what they did wrong or start berating themselves for not being “good enough”, or they deem the person to be a bad friend or inconsiderate person.

Do we have the right to expect an immediate or swift reply to our texts?

I’ll hold my hands up and say that I’m not always Mrs Speedy with the ‘ole replies but most people I know aren’t. If I happen to be beside my phone and it’s straightforward, I’ll likely reply but if there’s a question in it or I know it’s going to potentially descend into text tennis, I tend to think, I’ll respond in a bit, and then get distracted. Nia messed with my phone recently and I didn’t see that my mother had tried to call three times. She called the following day to say that she was worried that I’d been murdered… Clearly not!

Is it worth whipping ourselves up into a frenzy of anxiety about all of the potential things that are wrong with us or that person, that may be influencing the speed of their reply?

It’s tricky to have hard and fast rules about when we think that others should reply. We can only speak for what we will do and even then, we have to be careful of imposing our way of doing things on others in an, Well, if it were me… fashion. When we examine the basis of our expectations and even what our motivations are for doing or expecting certain things, some of the things we’re doing have a people-pleasing, IOU generator vibe to them. It’s not so much what we do but why we do it. If we make a habit of being an eager beaver replier because not only do we perceive it to be a form of appealing behaviour that reflects a ‘good’ person but also because in doing so, we hope to create a tipping point and have them reciprocate to the same degree, we then have to admit that we expect the immediate or certainly very swift reply because we need the validation (we think it means something about us) and we are also trying to influence people’s feelings and behaviour. This quickly leads to resentment.

Texts are instant but there’s also the perception that replying is ‘fast’ hence we can fall into the trap of thinking, How frickin hard can it be to take a second to send text? Of course it’s not just texts that we’re dealing with – we’ve all gone from phone, snail mail and face-to-face, to so many ways to be reached. We can even feel injured after checking up on a person’s online activity and seeing that they pinned or liked something X amount of minutes after we texted and yet we still haven’t got a reply. When we have a habit of expecting swift replies, we are operating on the assumption that we’re their only reply, or their priority reply, and/or that they have the same time on their hands as we do and/or that they understand how vitally important their reply is to our sense of self. If we’re chained to our phone, we may assume that they are too.

Each relationship is different and has its own communication rhythm. When we have an existing relationship and it’s mutual, it’s easier to not only have a sense of that rhythm but to also not feel away or jump to negative conclusions if a swift or immediate reply doesn’t happen. We won’t be keeping score nor will we feel away if we pick up the phone or message first despite having done it the last time. In fact, we might not expect the fast reply at all.

When a relationship isn’t mutual or there’s underlying tension that isn’t being expressed and dealt with, it’s easy to read not only into the speed of reply but even the content of it, and we should use these types of responses as a cue to be more conscious, aware, and present. What is going on within us that we are not acknowledging and/or what are we pretending not to already know about this person/relationship?

Mutual relationship or not, how we respond to a less than speedy response in terms of our own internal dialogue and anxiety, provides some insight into where we may need to work on being more personally secure. This isn’t so that we can accept dubious carry-on from someone within a lopsided situation, but more so that we can distinguish between us and another person and not have our self-esteem conditionally based on texts. If someone is engaging in lazy communication with us, we have a choice in deciding whether to continue engaging. Their texts (or lack of them) don’t reflect our worth.

If the gap between pressing send and receiving a reply is triggering anxiety, halt. It’s time to ask yourself: What is really going on here? Remember, it’s just a text. Anxiety tells you that you’re predicting negative outcomes or wanting to be in control of the uncontrollable.

Sometimes a text really matters because we’re lonely – it’s when we feel emotionally adrift from what we regard as key people in our life. A text can, in that moment, help us to feel less alone, less whatever it is that we’ve been telling ourselves that day. The danger is of course that while sometimes a text at the right moment or with a heartfelt sentiment can bring a smile to our face because we know that someone is thinking of us, the danger is that if we are reliant on texts because they are less ‘risky’ than putting ourselves out there and we are in fact using texts as our form of ‘emotional connection’, it will exacerbate any loneliness we already feel by increasing that emotional distance. We’ll find ourselves increasingly reliant on texting and will use it as a measure of our worth. We may even find ourselves accepting (and inflating) crumbs from certain people and over-responding, or even slipping into a fantasy relationship because these texts are providing a distraction from other aspects of our life that we’re avoiding.

When we don’t know a person yet and would like to, we can feel that we’re risking ourselves and may even have built them up in our minds and then can feel anxious and even rejected when we’re ‘left hanging’. We might analyse the length if they eventually reply, or even stress out over the content. This is where we have to keep ourselves firmly grounded. Yes, if we’re getting to know someone, fairly prompt responses – so within a day – is ideal, but we need to ensure that we’re not holding our breath and suddenly basing our existence around whether we’re going to hear from this person or playing text tennis in the first place. It keeps things in perspective.

Obviously if someone isn’t replying at all, that’s an issue and if generally speaking, they tend to take forever and a day to reply and it’s coupled with other symptoms of an imbalanced relationship, that’s a problem. That’s the clue: If there are other issues and niggles present in this relationship, the lack of response or slow response is a symptom pointing you to other things that you need to pay attention to. There will be this and other stuff.

If you’re very affected by the speed and frequency of texts, it’s useful to not only delay your own responses* by having phone breaks and not being chained to it, but to also swap out some of these texts for calls. The latter can prove to be a real wake-up call because if you’re resistant to picking up the phone (or you can’t call them because they’re attached…), and you even feel anxious about the possibility of facing an underlying issue or experiencing rejection, you can use this information to step back a little and get a sense of what you’re thinking and feeling. If you’re substituting texting for getting out there, challenge yourself to have a text free day each week where you engage and do something that connects you with others and your life. I’ve found leaving my phone in the bottom of my bag or in another room for a few hours or even the whole day, is incredibly freeing – I don’t like feeling chained to my phone and disconnected from my life. Like email, the pressure to reply to texts can have you catering to other people’s priorities. There are more meaningful ways in life for us to show how much a person means to us – speed and content of text messages is not high on that list!

The only people who take issue with you having boundaries, are the ones who need your boundaries the...
Just Because Someone Says Something, It Doesn't Make It So (Don't let them use BS to blame you)
Compassion, Empathy, Sympathy, Hurt, Hinting and Kindness - 6 of the most misused words in relations...