Why Unhealthy Relationships Are The Equivalent Of A Power Struggle 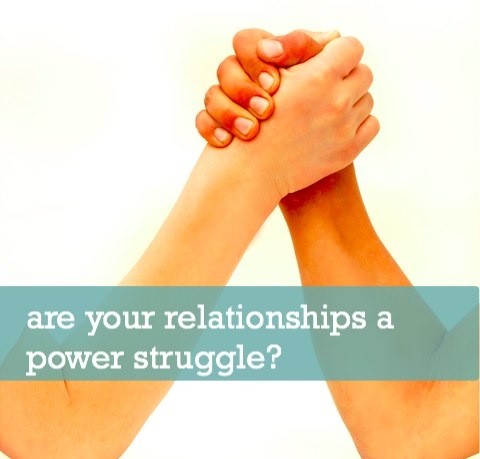 Listening to a reader explain their tumultuous involvement with their on again/off again boyfriend recently, I was struck by the obvious power struggle that they both seem oblivious to. It’s like each one keeps returning, or leaving, or promising and then passive aggressively undermining it, or having the ‘last word’ because they want to have power over the other person and how the relationship proceeds or ends. This isn’t a mutual relationship with love, care, trust, respect and shared values – this is two people playing to ‘win’, only they seem to have missed the memo that a relationship is about two people copiloting with a joint agenda not fighting for supremacy.

The ‘driver’ (there is always a more powerful party in unhealthy relationships that’s struggling with a ‘passenger’) wants things on their terms so not only do they want to do the relationship their way, but if they feel like it, they’re going to hang around like something rotting in your life until they see fit to be ‘done’ or you remove their seeming power over you by opting out. The passenger thinks that the way to get the relationship they want is to become the driver or make the driver less powerful or to get the driver to let them share the ‘wheel’. Not gonna happen.

If your relationship is unhealthy and you keep going back or seem hell-bent on ‘proving’ something or even disproving it, you are being sidetracked by your ego that has embarked on a power struggle.

You are mistaking love for power and so relationships become about you gaining power from someone or having the power to influence and change them, or feeling that because things haven’t gone your way that the only way that you can feel ‘whole’ again or proceed is if you forcibly or passive aggressively grab your power back from them.

You may even want the person and the relationship to be your ‘power supply’, breathing life into you and giving you an identity. These are things that you should have and keep before and during a relationship. In fact, you may have convinced yourself that it all went wrong when you stopped being in control of the relationship possibly due to ‘one false move’.

Respectful, healthy interactions and emotional maturity does not involve abandoning yourself and resigning your personal power in the ‘pursuit’ of ‘ownership’ and ‘control’ of another person.

The pain and the grief that is experienced when these relationships inevitably hit a point where the depths of unhealthiness cannot be ignored and/or they come to an end can feel debilitating and mind blowing. How can we not have power over them? We’ve ‘invested’, we’ve sacrificed, we’ve loved, chased, admired and pumped them up and often busted our own boundaries in the process. How?

If you look at the average unavailable relationship, it’s a power struggle.

Affair – trying to have the power to influence them into choosing you over ‘them’ and leave and make your legitimate. They’re trying to continue the affair on their terms often being manipulative with words and actions to ensure that they don’t jeopardise you continuing.

Casual – trying to get them to do things on your terms and upgrade you from being more than ‘booty’ or a pastime. Trading sex for power and love then realising it’s not power or love. They’re trying to have all of the trappings without the commitment or the effort often by giving the impression of a future and holding the power to decide the fate of the ‘relationship’.

Abuse – trying to right the wrongs of your past and trying to get their abusive ways under your control and be the exception to the rule. They’re trying to keep you under their control by diminishing your personal power so that you’re too fatigued and wounded to see them for who they are and move on.

When you know that they’re a game player and you don’t tell them to jog on, you continue participating because you think that playing will give you an opportunity to pull a power move and gain power over the situation. They recognise by your participation that you’re ‘game’.

The ‘driver’ game player thrives on control and once they know the pattern and have worked out how to ‘jig your lock’, them winning the power struggle (in their mind) can be as simple as getting you to return a call.

Any relationship where it feels like loss of your personal power or you’re both wrestling for power over the relationship isn’t a relationship; it’s a power struggle. It’s a code red, abort mission situation.You cannot continue doing the equivalent of repeatedly wrestling someone to the ground for a relationship or trying to do a ‘land grab’.

You may think that you’re fighting for a mutual relationship – you’re not. Someone who doesn’t instigate a dynamic of non-mutuality by tipping the balance and pulling power plays will seek to be an equal in a relationship, naturally. They’re not looking to own or control you or the relationship by doing things on their terms – they recognise the power of a copiloted relationship and don’t get their kicks or ticks in their ego box from gaining power.

They have their own personal power – self-esteem – and value you coming along with yours.

When you for fight someone for ‘power’ in an already non-mutual relationship, you’re actually fighting for it to be on your terms because you think yours are ‘better’ or ‘right’ because they suit you or how you see the relationship, or you may fight simply because you think it’s fair and that it’s your ‘turn’ like “Well…you’ve had five years of having things on your terms so gimme my go! It’s NOT fair!”

And as you’ve already seen if you’ve been in an unhealthy relationship, after you take your ‘turn’ which as the passenger is likely to be short-lived, they seek their power again and essentially go “My turn!”

If you do genuinely want to be happy and to be in a mutual relationship, create your own personal power with your self-esteem. The reason why these power struggles play out is because your self-esteem is rocky and your relationships are a source of identity, validation, and power whereas if you have your own power and identity and you hold onto it instead of coming into relationships and investing your entire self in a gamble for an identity, you would walk away as soon as the imbalance and lack of mutuality becomes apparent.

The important thing to remember is this: you always have power you just may not be using it or you’re putting your energies into the wrong things and wrong people.

Podcast Ep. 82: Thick Skin and An Elastic Heart
Can a Booty Call Grow Into a Relationship?
'I Can Change Him' Syndrome/Fixer Uppers