I Need You To Not Play With My Affections 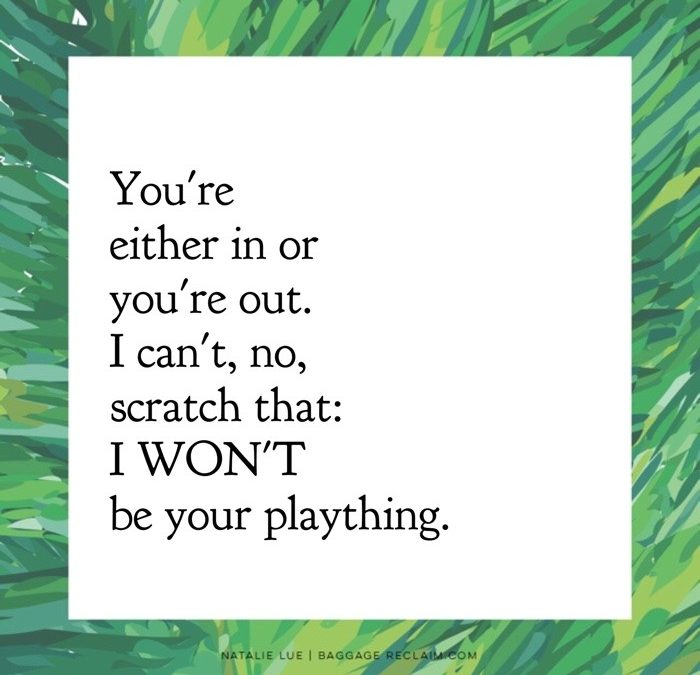 When we’re really into or still in love with somebody who we’re no longer with, but they still text, call, or ask us to hang out or to fix something, or even use us as a sounding board because, well, we’re ‘so good at that’, what do we do?

We tend to drop everything because we’re hoping that this person will fall for us again.

We’re hoping that if we keep doing some or all of the things that signify our devotion to them, that they will feel compelled to get back together. We hope that it will prompt them to see us in the way that we want to be seen. We hope they’ll drop everything for us.

What happens next? More often than not, we get hurt. Badly.

They are not as careful with our feelings as we are about our devotion to them.

And after a while, we start to feel bruised and possibly quite angry and resentful beneath our veneer of calm and being ‘pleasing’.

To them, it seems clear that they do not intend to get back together. They might even seem OK with having this seeming power to decide the fate of the relationship. ‘Clearly’, if we’re still engaging despite the lack of reciprocation, they can safely assume that we’re a shoo-in.

They might think that this is what hanging out, being friends and ‘caring about an ex’ is all about.

And I get it. When you’ve been in a relationship for some time, and then you break up, it can feel so abrupt to just go from that to being friends or even not being in touch for a while. The thing is though, blithely carrying on as if it doesn’t matter that we still have feelings for them and as if they’re not messing us around (they are, even if it’s ‘unintentional’), isn’t fair.

We’re, however, also not being fair to us if we don’t draw our line and step back for our own self-care. The truth is, if we continue to engage with them in the secret hope that they will feel inclined or yes, even obliged to give us another shot, it’s not fair to them either.

We’ll keep opening ourselves up to being hurt and then call it something they’re doing.

That’s not to say, whether it’s consciously or not, that they aren’t engaging with us from a place based on us having feelings for them that they enjoy but are not willing to truly reciprocate to the level that we desire. Until, however, we honestly reflect about why we remain open to it, we can’t see where we’re hurting ourselves.

This past weekend, I binge-watched the final season of Broadchurch (excellent British crime drama with David Tennant and Olivia Coleman). Without giving much away, there was this scene between a separated couple. He didn’t want the breakup, so each time she calls, he comes running. On this particular occasion, she comments about how he’s basically really good for unloading on. He finally does the right thing for the situation and speaks up for himself. In doing so, he acknowledges the truth about the current state of their relationship.

Him: You can’t just call me to come meet you for coffee like everything’s still the same.
Her: Can’t I?
Him: No. You know you can treat me like your little dog. Give me a whistle and I’ll come running, but I need you not to do that. I need you not to give me any hope.

We resist being honest and drawing our line because we don’t want to admit the truth and extinguish the hope that’s been blocking us from accepting that the relationship is over.

We think we’re OK with being needed in this way and being, in some instances, someone’s ‘supply’. Well, that is until we realise how we’re extending our pain and turning it into suffering.

The object of our affections doesn’t necessarily want to admit that they’re, in effect, using us.

Intended or not, they want things on their terms, sampling the things that they enjoy about us and a relationship while talking themselves out of getting back together. In the meantime, they’re rationalising about friendship, enjoying our company, and things not having to be so ‘cut and dried’. They figure that if we can’t cope, we’ll let them know and blah blah blah.

If someone knows in their heart of hearts that they don’t, in all seriousness, want to get back together (or even that they don’t actually want to begin a relationship and want to keep it casual, another area where this issue arises), they need to speak up. They know, whether they admit it or not, that the other person is holding out hope. They’re also too caught up in their feelings to read the writing on the wall. So they need to do the responsible, respectful, loving thing. They need to step back instead of stringing them along.

Being honest allows the people we’re engaging with to make emotionally responsible decisions.

When I speak with people who avoid being truthful with somebody who is into them, I tell them:

If you’re so clear in thought that you know that you don’t reciprocate their feelings or that you don’t want to get back together (or be in a relationship), speak up! They’re into you, and that clouds a person’s judgement.

Bringing it back to us though, we mustn’t string ourselves along. We need to step back at the point where we might be starting to lose a little or even a lot of respect for ourselves.

We mustn’t be that person who someone whistles for, and we come running in the form of, for example…

We need to not do that.

When we let somebody play with our affections, we turn it into hope, and it then gets turned into disappointment. And lather, rinse, repeat until we finally opt out of the disappointment cycle.

Even if they keep texting or calling after we draw our line, we need to see it for what it is and not be available. And it won’t be because we’re playing games and hoping to trigger them into chasing us, but because we’re better than being an option.

We need to stop giving us false hope so that we can have the true hope that comes with treating ourselves with the love, care, trust and respect that we deserve. Only then will we not accept less than mutually fulfilling relationships.