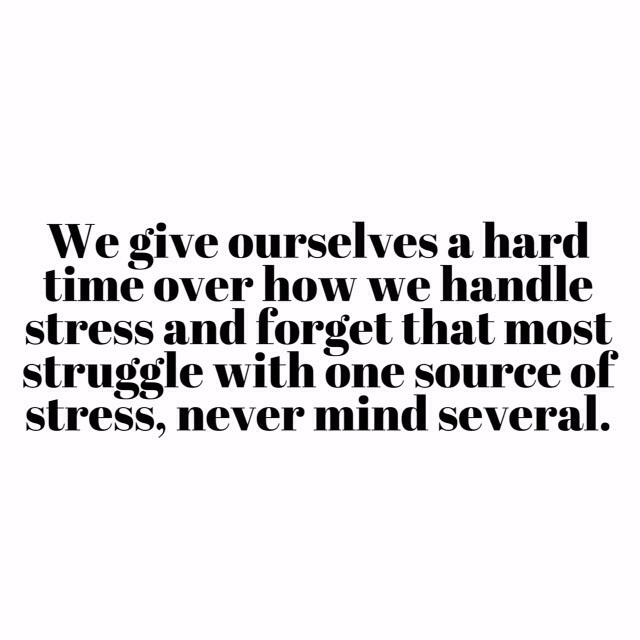 Over the past couple of months, I’ve become increasingly aware of counting your stresses. Sometimes we get so caught up in getting through the day to day and with the nitty gritties of the individual issues and situations, that we don’t step back and see not only the bigger picture, but also how big our stress load is. If we don’t register the magnitude of what may be high level stresses, we become acclimatised to that particular stress level until we get tipped too far.

I’ve seen many a BR reader struggle with stress and it’s specifically amplified by the sense that the stress isn’t being handled ‘perfectly’. Stress strugglers convince themselves that someone who was more ‘together’, ‘beautiful’, ‘confident’, or ‘capable’, or less ‘silly’, ‘needy’ or ‘sensitive’ or whatever, would just take it in their stride. Not true. Stress is something that affects everyone and it’s very easy to judge people around us based on the way that we judge ourselves, but that belittles those causes of stress as well as influencing factors that may make us more predisposed in that moment to not be able to handle incoming stresses. That and we’ve all known somebody who seemed so ‘together’, who people have said, “But she/he seemed so happy”.

Think back to a time when something seemed to knock you for six even though on other occasions, similar or even worse didn’t have the same effect – there were other contributing factors that caused you to hit your stress threshold.

I’ve spoken with a number of BR readers who cannot understand why on earth they are so distressed by the fact that someone who they admit they’re not that crazy about and who actually detracts from their self-esteem, won’t get back together with them. A bit of digging turns up one or more other losses and stresses in the preceding weeks and months, so in an effort to overcompensate for one area of their life where they don’t have control and are highly stressed, they try to gain control of something or someone that’s uncontrollable. It’s a distraction.

When I slipped into a comparison spiral in May that was partly fueled by being hangry (hungry and angry), reflecting on it in the hours and days that followed, it was easy to see why I would be particularly susceptible at that point – we were doing four hour round trips to visit my brother in hospital (he’s out and doing ok), the buying process for our house was initially quite stressful plus our landlord sold the rental property to our next door neighbours and suddenly all of this tension entered our life and at times we felt under siege. After a lull in the stress, it snowballed (my brother-in-law also wound up in hospital with malaria, sellers were driving us batty, landlord upped the ante, family drama, a very strange situation with a passive aggressive and the list goes on) until about early July when something seemed to snap. Some stresses resolved themselves and some, we/I had to get medieval on them. I found myself shaking one day and I thought, Feck this for a game of soldiers! No-one is worth this!

I also learned something very important about very strong physical reactions to certain people:  Paying attention to my body in that moment, I heard a message loud and clear – Just in case you were thinking about wussing out and not dealing with this person, think again. This is how this situation is affecting you. I listened and acted.

In olden times, I would have taken my physical reaction as a sign to keep my mouth shut or as a sign to not take  action.

Sometimes we forget that we’re only human and that there’s only so much stuff we can deal with. This is even more so the case if stuff from our past is driving us, because that’s unresolved and hogging up resources.

We forget that many would struggle to deal with one or two things, never mind several. And we juggle stress while also trying to live normally, which is handy from a perspective of not letting it get to us but then detrimental if we don’t acknowledge what we’re going through. We can end up running ourselves emotionally, physically, mentally and spiritually into the ground.

My acupuncturist told me that when we allow one source of negativity into our lives, it opens up space for others; they spot the vulneralibity and exploit it until you address it. This makes sense to me because dealing with shady/negative folk is a drain and a distraction. From the moment our living situation changed and we felt caught between a rock and a hard place, an opening definitely appeared, but the moment we thought, Screw it, and no longer saw it that way, it had a positive snowball effect.

I’ve noticed that when you stand up for yourself and you support you for doing so, you keep going. In the same week where I very firmly drew my line on the living situation, I found myself in a weird high school situation in the playground – I know, I know – and for a few moments, especially coming off the back of all of the other stresses, I felt wounded by the bitchiness and then I not only thought, Oh hell-to-the-effin-no, but I also thought of every BR reader who has felt wounded by someone’s crap, and I spoke up for myself. She got me on the wrong frickin’ week!

Same with stress. Once you acknowledge and as such, count your stresses, it gives you perspective and it can be a relief to know that you’re not losing the plot. Don’t compare your stress. Your stress is personal to you. No one can tell you that you ‘should’ be able to deal with something better than you are – that’s exactly why some people don’t end up sharing what’s really going on within them and end up feeling emotionally disconnected, which can trigger loneliness, depression, or worse.

It’s important to count your blessings but it’s also important to count your stresses when you feel overwhelmed, confused, and unsure of why certain things are happening in your life. Your stress provides clues about where you can support you more but also why you may be making certain choices that you might not make under less stressful circumstances.

Take care of you. Listen to you.

PS We move into our new home on Monday when I will also be turning 37. We have moved out of the rental and hand the keys back in the morning. Onwards.

The Justifying Zone: when a woman needs to justify her emotional or sexual investment
7 Signs That You Need To Stop Dating For a While
What is love and a good relationship?
Share this...