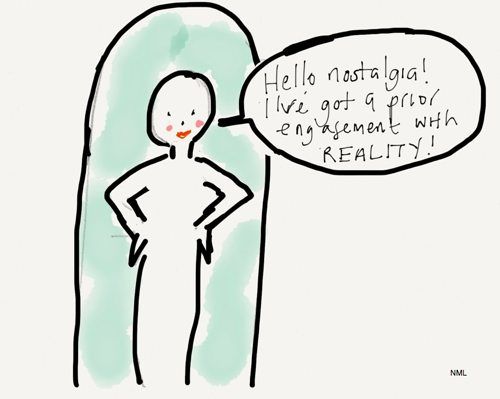 Regardless of the experiences you may have with somebody, nostalgia may be catching you off guard. It’s that sentimental longing or wistful affection for a past that you have happy associations with… even if what you long for represents a small part of your overall experiences or is proving to be more about being nostalgic for the illusions and/or hope you had when you were together.

Lots of readers share stories with me about their struggles with nostalgia and while missing someone or feeling nostalgic is normal to a degree, where it becomes problematic is if you override negative associations or reality to the detriment of your self-esteem.

The slot machine of good times versus bad times is why some people can find themselves in very toxic relationships waiting for that ‘high’ to come around or put their hand in the fire of going for a re-run with a Returning Childhood Not-Such-A-Sweetheart.

Until you’re in a safe place where your feelings and thoughts pop up but they don’t derail you and you’re able to respond to them with some self-care and a gentle (and possibly sometimes sharp) tug back to reality, it’s best to treat nostalgia like that guest that likes to drop by whenever they feel like it and will overstay their welcome if you’re not mindful. Rejection is also another guest that needs to be told to push off before it takes over your home [head].

When you feel nostalgic, you’ve almost got to say, “Hello old friend. Fancy seeing you here… again. It’s a shame that you’ve popped around unexpectedly but you can only stay for 15 minutes and then I’ve got to head off as I already have a previous engagement with real life.” You can do the same with feelings of rejection and then you’ve got to kick out your guest because they won’t leave until you very firmly ask them to / chuck them out or you replace them with happier house guests.

Do compare the perceived reward and nostalgia with the fallout.

It’s easy to get sidetracked by the perceived reward of reconnecting with nostalgia whether it’s torturing you with daydreams and then engaging in blame, shame, and rumination, or attempting to go back and recreate those feelings with your ex. This is how you get hurt by chasing a short-term high so you need to compare the pain you have previously felt versus any perceived joy.

Which one outweighed the other?

Also consider the impact on you when you take these detours.

Is it worth giving you a hard time just so that you can have the fantasy for what may be a few minutes or hours?

If you’re going to daydream for half an hour and then spend the rest of the day beating you up, it suggests that nostalgia isn’t something that you can afford right now and that you need to nip it in the bud before it derails your day.

Don’t combine nostalgia with being reactive because you will act first and then think later when the nostalgia has passed. I’ve heard from so many people who’ve been impulsive and then got into awful situations.

It can be a quick slide down a slippery slope if you try to make a bad decision become a good decision by hanging around.

If you feel really overwhelmed by nostalgia, do everything you can to refocus your efforts in your own life. Don’t just sit there – move around, go out, immerse yourself in a project, go to a support group, walk, jog, go to the gym, journal, knit, garden, something. Whatever your typical response time has been in the past, supercharge your efforts, especially if it’s taken as little as minutes for you to react to the nostalgia.

Do make sure you identify if there are any triggers for the nostalgia – keep a Feelings Diary – and do use what you discover to help you identify where and how you can meet these needs in your life. Just because this relationship is over, it doesn’t mean that you couldn’t enjoy the things you miss with someone else, even if it might not feel like it right now.

The thoughts are natural but feeding them with illusions isn’t necessary and is the dangerous part of the daydreaming. It’s where you can be most vulnerable because when you feed it with the fantasy, you end up setting you up to give you a hard time. You can have the thoughts, you just don’t have to chase after them. You can also have the thought and then force yourself to move on to something else or respond with something that supports you instead of undermining you. The better you get at intervening is the less impacted you are by nostalgia – you can feel it, smile even and then return to your day.

It is easy to fall into the nostalgia trap if you’re not doing very much in your life right now – make new memories!

In the Line of Fire: Are you getting carried away with policing your boundaries?
Don't Indulge in the Blame & Shame Game
Advice: Is it my fault that we broke up?