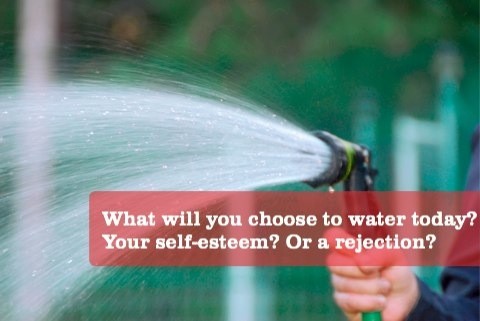 If you’ve been ‘tending’ to a rejection by watering it with copious amounts of rumination expenditure, it’s time to turn your ‘rejection talk’ on its head and look at your experiences with a fresh perspective. Every day I hear from people who are literally holding onto a rejection (that often isn’t quite the rejection they think it is), like a security blanket and I’ve gathered a few of the most common rejection scenarios…

“Dating is so hard – I find it difficult to deal with rejection.” Yes dating involves some rejection but the fact that you’re not in a relationship yet doesn’t mean you’ve been rejected and are ‘rejectionable’ – you’ve rejected people too and you haven’t found a relationship more fitting, which is what so-called ‘rejection’ paves the way for.

“I’ve avoided relationships because I don’t think I can handle the rejection of another one not working out. ”A relationship not working out isn’t the same as rejection. You may have had different values, which ultimately rendered you incompatible, or one or both were behaving counterproductively to the progression, commitment etc of the relationship, or you both may have loved and cared but you ultimately wanted different things – that’s not rejection; they’re very valid reasons for a relationship to end.

“I don’t understand why they didn’t call after they said that they would – what did I do to make them reject me?” They said they would call but they didn’t – why are you making it about you being rejectionable, when ultimately they are the ones that failed to follow through plus why are you assuming that it had to be something about you that caused it? The message is clear – you think people mistreat when given a reason by others. Not true.

“I can’t stand the feeling of rejection – I just want them to respond to my text, to call me, to want me back.” But this is short-term gratification – the pain will return afterwards and your ego isn’t going to recover if you keep pacifying with attention seeking. It’s also not rejection if them not responding to your text etc ultimately leads to them and you doing the right thing by you. I’m glad my exes stopped getting in touch and I had to sort my ego out instead of focusing on ‘rejection’ and chasing highs.

“I can’t get over this because I feel so rejected – it’s like everything that I am was tied up in him.” You can’t get over this, not because you were rejected but because you invested your entire self, tied yourself to them and then drowned when the relationship ended. That’s codependency, not rejection, which you wouldn’t see it as if you had healthy boundaries and your own identity in the first place. Reclaim yourself – inside you is a great you to discover.

“There must be something seriously wrong with me for him to just disappear – the rejection is just so hard to take! It’s not even like I got to reject him first!” Hello! They disappeared! It’s the cowardly way out – no conflict, an opportunity to make up whatever crappy justifications there are for lacking the brass balls and decency, and ultimately it’s the easiest way of exiting and pressing the Reset Button. That’s assholery, not rejection – FLUSH!

“If I’d had any sense, I’d have rejected her before she rejected me.” But it’s not a game. Your job in life isn’t to ‘get there first’. You’re not Charlie Sheen “winning”.

“I must have had about a thousand approaches from dating sites, which I suppose should make me feel good but I don’t have a relationship yet – what’s wrong with me?” How can someone who has 1000 approaches be focused on rejection? Maybe instead of collecting attention, it might be better to tweak your profile if needed and go on some dates. Don’t get addicted to the approaches – you need to be a ‘closer’!

“He’s moved on as if I barely mattered whereas I’m still here hurting. Why does he get to move on? Seeing her talking about their relationship on Facebook leaves me feeling like crap and rejected.” But their relationship has nothing to do with you. If you’re still hurting, you’re still hurting – he doesn’t have to recover on your beat and may actually have knee-jerked himself into a new relationship to avoid his own feelings. You could do that but you’re not (which is good), but also – if you keep track of him on Facebook and use his new girlfriend as a paddle to whack your self-esteem with, then yeah, you’re not going to move on and you’re going to feel like crap. Why open yourself up to self-rejection by using Facebook to take other people’s fakery and attention seeking as the inspiration for the I’m Not Good Enough story?

Focusing on rejection talk is actually a means of lying to yourself, which depending on how illusion inclined you are, can have you caught up in a fantasy that will actually send you back to the same pain source, or have you trying to right the wrongs of your rejection past on your next relationship due to making a judgement about you that in turn gives you a distorted perspective. This is self-rejection.

When all is said and done, the more oxygen and brainpower that you give over to a rejection, means that most of the rejection actually comes from…you.

Talking about your relationships in terms of ‘rejection’ is indicative of the fact that you were using this experience and possibly others as a way of gaining acceptance, or that certainly post breakup, you perceive it as a ‘lost opportunity’ for acceptance. It may not have been a conscious mandate, but it was there.

Now you can keep focusing on this idea that you’ve been rejected and flog yourself with it, or you can choose to let it go and claim back your identity. You haven’t ‘failed’ as a person and you’re not ‘rejectionable’ – there is another view, possibly even several views that you can look at an experience and gain an insight that you can in turn use to apply positively into your future. It requires you to choose and keep choosing that view.

Let your family get on with their own drama
When are you going to stop punishing you and allow you to move on?
Sometimes Embarrassment / Shame Stops A Person From Making Attempts To Remedy A Situation Or Get In ...