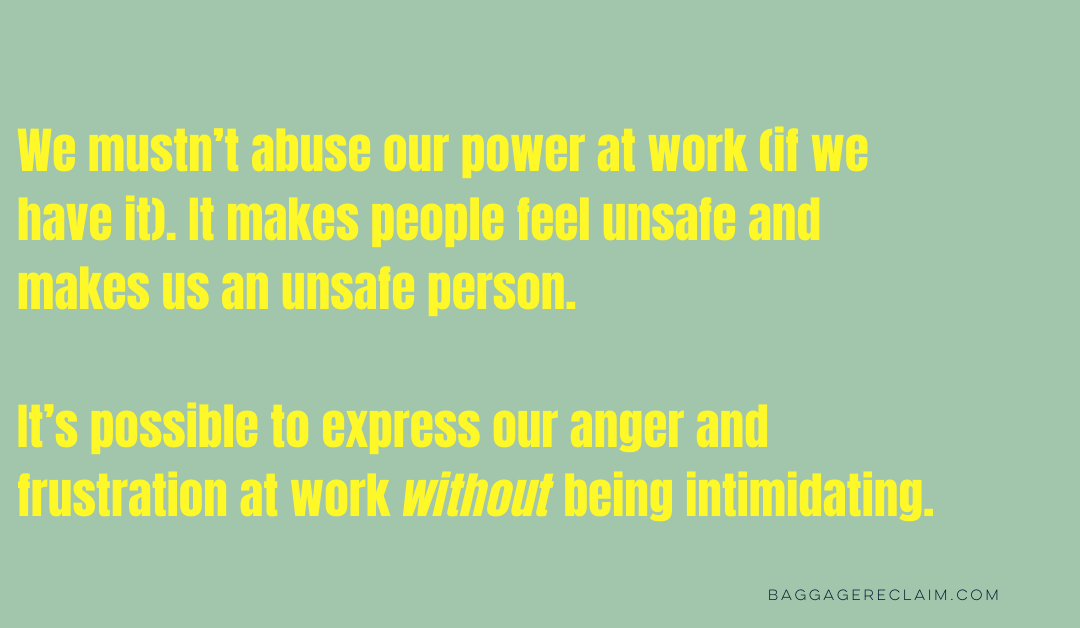 Last year in the wake of returning to set after the first wave of the pandemic, Tom Cruise was recorded going ballistic at film crew who weren’t abiding by Covid guidelines. Aside from the health implications, it would have been the third shutdown. The disruption costs a small fortune and puts hundreds of jobs on the line. In fact, thousands when you consider that how one set functions during Covid has implications for whether others will get the go-ahead.

In what was not only an expletive-laden eruption but clearly obvious fury and care, Tom very forcefully attempted to convey boundaries and expectations—and overstepped boundaries at the same time. And I think that this situation speaks to one of our major stumbling blocks about boundaries:

Does showing our annoyance and frustration mean that we’re crossing boundaries?

The answer: it depends.

There’s nothing wrong with expressing annoyance and frustration. They don’t equate to violating someone’s boundaries. In fact, as humans, it’s acknowledging our anger and frustration (and that of others) that alerts us to problems. We recognise injustices, the seriousness of something or, yes, how we and others have overstepped.

Where we can overstep boundaries in expressing our annoyance and frustration, at work or otherwise, is how we go about creating them, including the delivery. I understand Tom’s anger and frustration. This pandemic has shone a very clear light on society’s problems with respecting boundaries. Still, we don’t need to be intimidating.

Basically, if we bust boundaries to communicate ours, we’re not being boundaried.

Now, granted, there are a variety of factors influencing how much we or someone else loses their shit at work. These include pressures that only we or the other party are privy to (or that everyone’s aware of), high stress and responsibility, fear, being way over our bandwidth, poor conflict management and communication skills, and, yes, having previously kept our silence about the very thing that’s tipped us over the edge.

It’s easy to argue that anger and frustration are how someone shows their care and dedication. Side note, it’s this kind of reasoning that keeps people in abusive relationships long past their sell-by-date. We say that someone’s passion, attention to detail, emotional investment, dedication to others, financial investment, creativity or whatnot is what causes them to demand so much of others and act out.

We need to re-examine these pervasive tropes that we use to explain inappropriate workplace behaviour. There are plenty of humans emotionally, mentally, physically, spiritually and financially invested in their work to the same degree or more as those who demand a lot of others or lose their tempers, and yet, they don’t behave in those same ways.

The pivotal factor influencing 1) how far someone thinks they can go at work and 2) how their anger and frustration may be perceived is power. That’s both real and imagined power, by the way.

Just thinking that someone could endanger our livelihood and reputation can silence us. Throw in bystander effect where others observe the same dodgy behaviour and say nothing or claim it’s ‘the culture’, and it’s easy to see why we find it difficult to sense our boundaries.

Someone’s actual or seeming power combined with an eruption of anger and frustration is intimidating.

And let’s be real: Depending on how someone pops off at work, it could be triggering too. Our nervous system remembers, for instance, past experiences of bullying, feeling threatened and terrified. It remembers physical punishment, yelling and humiliation. Sure, it might not be a like-for-like situation, but guess what? Our subconscious doesn’t care about that! It’s why humans often let fear about things that aren’t real drive them.

We mustn’t abuse our power at work (if we have it). It makes people feel unsafe and makes us an unsafe person.

We also need to be willing to acknowledge when we’ve overstepped boundaries and address it with those affected. I don’t know what Tom did after the recording was ‘leaked’, but you like to imagine he was mortified at hearing himself! Remember, also, that people can be more than one thing. Tom can be deeply stressed and also over the line. It was all valid points packaged in an unleash.

It’s possible to express our anger and frustration at work without being intimidating. In fact, it’s totally possible to create boundaries full stop without trying to rule others.