We Have To Allow Our Friendships To Evolve 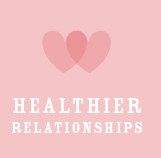 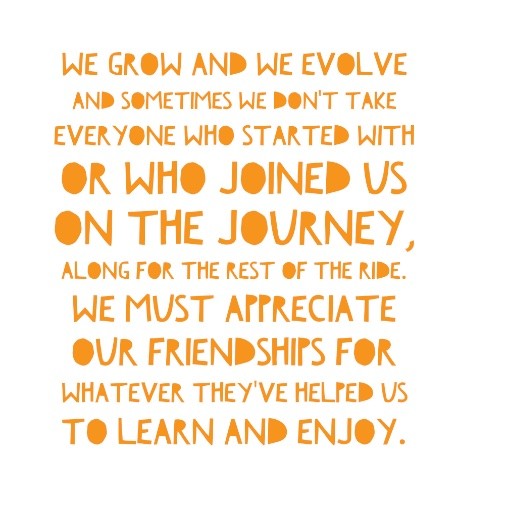 One of the challenges that friendship can sometimes pose is this desire, whether its on our part or on the part of our friend(s), that nothing changes or that the friendship is maintained in orderly fashion. There are often roles within friendships, particularly imbalanced ones where one party may be more of a Florence Nightingale type or the one who never has his/her stuff together and juggles various dramas, or the one who is super responsible and never appears to put a foot wrong. There can be recurring ‘go-to’ topics – the ex that got away or family dramas or reminiscing about the good ‘ole days or whatever. There can be underlying predictions about who will settle down first or whose life will be plain sailing and when the running order is messed about with by real life, the person who always thought that they would be doing what we’re doing (or vice versa), can feel very confused, wounded, and yes, even envious and resentful.

When we ask why it bothers us that things have changed or why things had to go in a certain order, what’s revealed underneath these concerns is where we personalise things to too high a degree.

We often don’t want things to change because we are resisting change or are still affected by the past enough that it’s distorting our present and our perception of our future. If things stay the same, if the routine of the friendship doesn’t change, then we can remain in our comfort zone. We feel as if it’s a level playing field. If we accept the change but we judge us unfairly, we see that change as a reflection of our ‘failure’ and/or as rejection. We feel as if we have time to play with. When our friends appear to be changing and evolving, we may put pressure on ourselves. It can trigger an unease that subtly plays its way out in the dynamic. It’s one thing if we don’t want things to change from being healthy to unhealthy but it’s another when we don’t want our friendships to evolve because we don’t want to evolve.

When various friends began settling down, I would never have admitted it back then, but I subtly changed my friendship habits. It was so subtle that I didn’t notice it until I was in a place where I was ready to listen to myself. It was easy for me to do a Bridget and call some of them Smug Marrieds but most weren’t. I subconsciously distanced myself partly because I was living the Fallback Girl life and especially because I felt that seeing a guy with a girlfriend while your friends are settling down didn’t really jive. So I judged me and aligned myself with my single pals or the ones who had relationship woes. I kept it hidden and my inner turmoil as well as the secrecy threw up an invisible barrier. Ironically, these were some of my most understanding friends in the end.

The funny thing is – and I talk about this with so many people – it’s easy for us to go, “Friends shouldn’t judge”, “Friends should always be there”, “Friends should agree with you even when they don’t”, but we judge, we’re not always ‘there’ even if we tell ourselves that we are (or we are but we’re doing that people pleasing thing where we accrue debt with our ‘good deeds’ and then feel resentful about not getting payback), and we don’t always agree with everything that they say and do (and nor do we have to).

One of the things that I’ve gradually lost my attachment to is how I think things ‘should’ go or how I think people ‘should’ behave and it’s for one simple reason – me knowing my own boundaries, standards, and values is great and it teaches me about where I’m in alignment but me painting a picture in my mind of what people in my circle ‘must’ be and do just leads to an Imagination Hangover. It doesn’t mean that I have friendships without expectations; it means that I have friendships without an excessive amount of attachment to expectations and enjoy them for what they are in reality.
All of our friendships are unique.

Granted, there are parallels and clearly there commonalities within groups of friends, but all of our friendships are unique and it’s vital to honour the separateness of both the individual friendships and of each other. I’m not friends with my pals because we’re the same; it’s because we each have various mutual like and affection. The friendships have a basis of love, care, trust, and respect along with common core values and after that, the rest unfolds on a friendship by friendship basis.

Back in the day when my friendships tended to revolve around us living in each other’s pockets, we had some great times, but with my rocky sense of self and turbulent relationships, it was sometimes difficult to discern where I ended and others began, plus I felt excessively emotionally reliant at times because external esteem was my self-esteem. I was very prone to taking things personally or worrying if we weren’t in touch. I wanted things to be a certain way because when they weren’t, I’d feel abandoned.

Losing this attachment to the ‘shoulds’ has stopped me from living in the past, from imposing what I feel is the way that a friendship should play out, and my friendships feel mutual.

Some friends I speak with regularly and others, occasionally. I don’t assume anything bad if we’re not in touch. With most, when we see or speak, it’s as if no time has passed but at the same time, we’re in the now.

As our lives evolve, our friendships do too and that means adjusting to new rhythms which isn’t always easy. I’ve found some of the shifts in my own challenging and saddening at times but with the acceptance, we’ve either reestablished the friendship with the adjusted rhythm, or life in its funny ‘ole way has opened up new friendships once I’ve been more receptive to it.

It’s easy to fall into the trap of benchmarking the routine of one friendship against another but, while this can be useful for gaining clarity about issues, it’s not so useful if it’s to attempt a one size fits all approach. We could have an equally good friendship with a friend we speak with a few times a year as we could with somebody we speak with quite frequently. Trying to make all our friendships the same makes it too much about us. It can cause emotional distancing because trying to control the uncontrollable with friendships, limits vulnerability.

While we can’t keep up our friendships to the same intensity that we might have done when we were free from as many ties, what can make a huge difference is to not vanish each time we’re in a relationship. When we check out, it gets tougher to slot back in, especially if we hope to pick up from where things left off.

We need our friendships, not to ‘fall back’ on when things get rough or as a filler between relationships but as a necessary part of our journey because when we are very romantically focused or we’re too in our own heads, that lack of emotional closeness can evolve into loneliness or being reliant on them for our self-esteem. We may veer between trying to fill voids with romantic partners and then when that doesn’t work, trying to get our friendships to.

We need our friendships to be equitable to truly enjoy them.

They don’t need to be perfect or remain static. We can appreciate friendships for what they’ve been now and in the past. Friendship and life itself, has an ebb and flow. It’s important to note that if an unhealthy friendship has run its course, that’s a good thing. We grow and we evolve and sometimes we don’t take everyone who started with or joined us on the journey, along for the rest of the ride. Maybe they were only supposed to be around for part of the story. Maybe they’ll show up in other chapters. New people can join too.

If you’ve struggled with friendships changing, have some compassion for the you that you think is lost with these friendships and don’t assume the worst about you (or them). Sometimes, when we’ve been through a few things, it’s easy to come up with a story about these changes that fits a negative narrative. You’re still here. Take care of you. Don’t be afraid to branch out. Don’t be afraid to re-establish the friendship from a new spirit of acceptance and mutuality.

Did they just do a U-turn? When a person overestimates their level of interest or capacity for commi...
Standing By Your (Broken) Man - Part Two
Blind Spots Block The Relationship You Want