Are You Living By YOUR Values In Your Relationships? They May Be Great On Illusionary Paper, But Where Are The Shared Values? 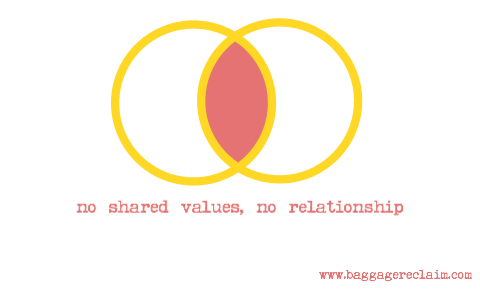 I’ve written a lot about the importance of values and how if you want to understand why your relationship isn’t or wasn’t working or want to have improved relationships, how you need to better understand what your values are and more importantly, live them.

Values, quite simply, are about what you believe you fundamentally need in order to live your life authentically and to be happy.

Your values are your own and whatever you’re prioritising in your life and swearing up and down that you need and can’t survive without, will tell you a lot about your mentality and your direction. Little do you realise that you may actually be taking yourself off course and busting your own boundaries in the process.

We have a tendency to do a few things that cause us to wind up in a lot of problems:

1) We get sidetracked by secondary values which are stuff like common interests, appearance and anything that is ‘nice to have’ but doesn’t really tell you a great deal about the person and when all is said and done, it won’t make a difference if primary ‘core’ values are not shared.

2) We make assumptions about what the existence of some values, qualities and characteristics mean and assume that other values that we desire are also present. It’s why I get so many emails from people telling me that they met someone who looked as they would like or was super intelligent or they had various common interests with, or they go to church / are the same religion and yet they don’t understand why they clash, have entirely different characters, or don’t want similar things. It’s like 2 + 2 + 1 = 100.

3) We ignore the vital feedback communicated from people’s actions and words and in fact tend to be blinded by our own values. “Well I do ______ and _____ and ______ is important to me so why aren’t they doing and being the same?” Er because values are personal.

Your job isn’t to make someone have the same values as you; your job is to respect and live by your own values and find likeminded folk. We also persist in focusing on values that we think are important to us that are being met, yet completely ignore the fact that the problems we are experiencing are not only being caused by other values, but that they are also giving us feedback that communicates that we either don’t understand what’s important to us and are ignoring it to our detriment, or who we say we are and what we want is not true.

You have all sorts of values and together they are the sum of you.

You may never have truly given a great deal of thought to what these values are, but they are a mix of personal values (your character and personal code of ethics) along with stuff like economic, religious, sexual, religious, political, social, hobbies and interests, appearance etc. If you want to be happy in or out of a relationship, it’s time to heed your own values.

1. If you have some critical differences on the personal values front, it does not matter which other values you claim to share, your relationship isn’t going to work. A lot of people prioritise being in a relationship, companionship, getting laid etc, but I’m yet to come across one person who is genuinely happy doing these things with someone who is for instance, a liar, cheat, abusive, and who doesn’t treat them with love, care, trust, and respect.

Personal values represent character and boundaries hence if you’re with someone whose character isn’t similar or at the very least compliments yours, you will bust your own boundaries by deviating greatly from your values while at the same time they will bust yours.

You will find that there are many differences that can be overcome when you respect the individuality of others as opposed to trying to make people be a clone of you and/or blaming yourself for why they’re not, however, boundary busting personal values is not one of them. And remember: If you go along with another person’s dodgy values, it is time to have an honest conversation with yourself about your own personal values. I’ve had a number of emails from women who have been with men who eye up underage girls, or who lie with the ease of drawing breath and yet they were still there. Come.On.

Let me say it again – we trust people with whom we share core values. If you also want to understand why you keep getting into similar unhealthy relationships it’s because while you may profess certain values, you ‘trust’ in the feedback from that person possessing certain values that speak to your own pattern. Hence you may feel more trusting of someone who is shady and dodging a relationship, not because you’re truly ‘trusting’ them, but more because you trust that this relationship is ‘safe’, that you can seek validation, and that you can fulfil your self-fulfilling prophecy that speaks to your own beliefs about you, love, and relationships.

3. Look at what keeps coming back up and causing issues in a relationship – no matter what is being said, it tells you a hell of a lot about where there are incompatibilities with your values. This information will either tell you why your relationship isn’t going to work or is at the very least highlighting where you need to be focused. I’ve had so many people share stories about how they were with someone who was so attractive, sexy, shared common interests, kind to animals/children, mentioned back in 1983 that they might want to get married or that they’d like a relationship one day, they made them laugh and yada yada yada. This is all well and good but if this was what was the bread and butter of your relationship, you wouldn’t be experiencing major problems.

All this he said/she said and blowing smoke up people’s bums and pumping them up is a waste of your time because you’re looking at the wrong information. The net result of your relationship, the areas where you’re struggling – this is telling you where you don’t share values or where there’s certainly a miscommunication of them.

4. Be careful of the silent handshake in values. If you stick with someone who doesn’t share core values, they assume that you’re not serious about your own values and that you’re actually now sharing theirs. Of course you may be assuming the same thing. Do not ignore core differences that will take you away from being you and certainly don’t proceed on the assumption that they’re going to abandon their own. Love is not about having the power to change someone.

5. You are not looking for a clone of you. I know many couples who have different values but share core values where it counts. It means that it doesn’t matter what colour they are or religion or size or political party – when it comes down to how they each want to live their lives and how they want to treat one another, they are on the same page. Equally I know a lot of people who value certain things and so even if they had all of this in common, they wouldn’t be with someone who wasn’t the same religion, colour, political party etc. That’s their prerogative – these are their values to live by but never allow someone who is very rigid about these things to be with you (someone who doesn’t embody this value) and then use it as an excuse to mistreat you or not commit.

Someone may be great on illusionary paper, but it’s values that show who they are and whether your relationship can happen in reality.

New Video: When You Try To Demonstrate Your Love But They Interpret a Lack of Self-Love
Hooks: Understanding What THEY Think Hooks You To Them & the Relationship and How This Can Be Exploi...
Giving to get along