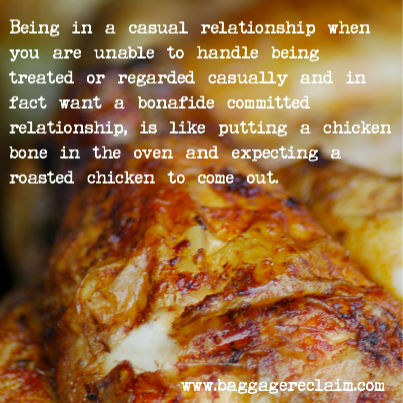 Many of us are guilty of believing that we can abandon our boundaries, values, and sense of self in the pursuit of love and happiness and then we wonder why we often feel like we’re in love on our own and are not very happy. We expect to deviate greatly off course and to still end up at the same ‘destination’ or achieve the same goals without having to actually conduct our lives in a way that’s conducive to this.

We wonder why we’ve been typecast or pigeonholed into a role…that we’ve chosen by way of participation.

Doing things that make you unhappy / detract from you and expecting them to make you happy and to add to your life doesn’t make sense. The question you have to ask yourself when you say that you want one thing but you do something entirely different is, how serious are you? Where is the mentality and the actions that support your values and the direction that you say you’re headed in?

There is this fear that if we have boundaries, uphold some reasonable standards in our lives and we don’t agree to participate in half-arsed situations, that we’ll ‘scare away’ the person that we want or that we won’t be in with a shot should they get themselves together. This.Is.Bullsh*t.

For a start, if you having boundaries and standards and being unwilling to participate in an affair, to have sex on the first date or sooner than you would like, to participate in a casual relationship, or whatever is going to scare someone off, then they’d better stay scared. If that’s the type of thing that sends them running for the hills, you never stood a chance anyway.

Secondly, you are not operating a Layaway or Try Before You Buy Scheme. Many have gone before you (including me) and many will come after you and no good ever comes of selling yourself in on a low ‘one time offer’ with a view to being tested out and ‘upgraded’ later. The person who would accept you giving them a low introductory ‘APR offer’ does not appreciate the ‘sacrifices’ and when you have the hidden or even out in the open agenda of having them pay you back at a later date with the relationship that you want, you’re more often than not left empty handed.

Relationships are not like some jobs where you can work your way up from the post room to director of the company. You are busting your own boundaries when you deviate from values you profess to have and take shortcuts and even inadvertent u-turns out of love, lust and ego.

Being in a casual relationship when you are unable to handle being treated or regarded casually and in fact want a bonafide committed relationship, is like putting a chicken bone in the oven and expecting a roasted chicken with all of the trimmings to come out. It’s the same for affairs and other unhealthy relationships.

Knowing which role you want to take up is absolutely not about playing games – it’s about recognising that you shoot yourself in the foot if you opt into lesser roles and sell yourself short. You may think that it makes sense because some of the things that you’re doing appear to be the ‘hallmarks’ of what you’re aiming for but these don’t mean anything if the net result of all of this participation does not yield the landmarks – commitment, progression, balance, intimacy, consistency, shared values, love, care, trust, and respect within a mutually fulfilling relationship.

They’re going to take you at your action and form an opinion on that basis.

When we conduct ourselves with self-esteem by having boundaries and values, only two things are going to happen: the person who wants to engage in a mutual relationship will respect them and the person who isn’t and wasn’t going to respect them anyway is going to walk. Either way, each situation leaves you with your sense of self intact.

Having boundaries and expecting them not to be busted up never makes someone who was meant to be in your life leave, so if they don’t hang about, consider it a blessing in disguise.

It’s actually a lot easier to be with someone who you don’t have to clobber over the head to share the relationship that you want or to treat you decently who you share similar values with, than it is to be involved with someone who may have some elements of what you claim you want but who as a whole cannot meet your expectations. Not only will it be like reverse engineering an unhealthy relationship but then you end up feeling like you have to ‘undo’ their perception of you as well.

No matter what ideas you have about what could happen ‘if only’ or being crazy in love, going down the path of second guessing yourself, compromising you, and going off course means that you’re moving away from who you are and what you say that you want. Get behind you, stop apologising for having limits, and make sure that the role you take in relationships leaves you with your self-esteem intact.

Do You Have a 'Not Allowed To Fail' Mentality Towards Dating & Relationships?
Sitting On The Fence: The Position You Adopt When You Fear Making Mistakes By Committing To Decision...
Podcast Ep. 206: Let's Wait Awhile